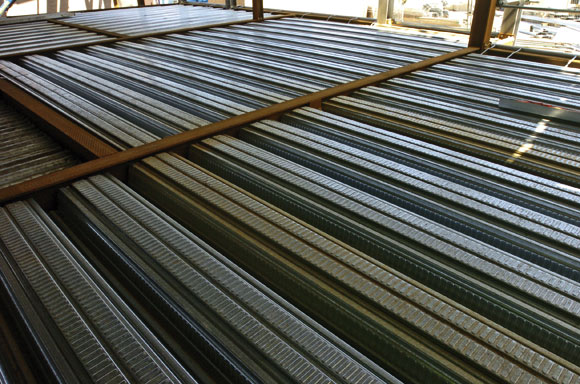 Major changes are afoot in Plymouth, the south west’s largest city. A number of construction projects are set to invigorate the city centre, while large areas of the metropolis once owned by the Navy are being turned over to new civilian use.

Since the end of the Cold War, Plymouth’s naval dockyard at Devonport has been downsized in keeping with modern day military spending and requirements. The city’s reliance on the naval base has also waned and today new employers are being invited to locate close to one of the UK’s largest natural harbours.

“For most of the 1990s the city was in a state of limbo,” says Brad Coles, Director of locally based structural engineers Airey & Coles. “But in the last few years there’s been a noticeable difference and the place is now really starting to move forwards.”

An integral part of this regeneration has been the overhaul of the city centre by encouraging more people to live and work downtown.

“Plymouth was heavily bombed during World War II, and during reconstruction most new housing developments were situated in the suburbs. Consequently, come nighttime many areas in the centre were, until recently, pretty much deserted,” says Mr Coles. 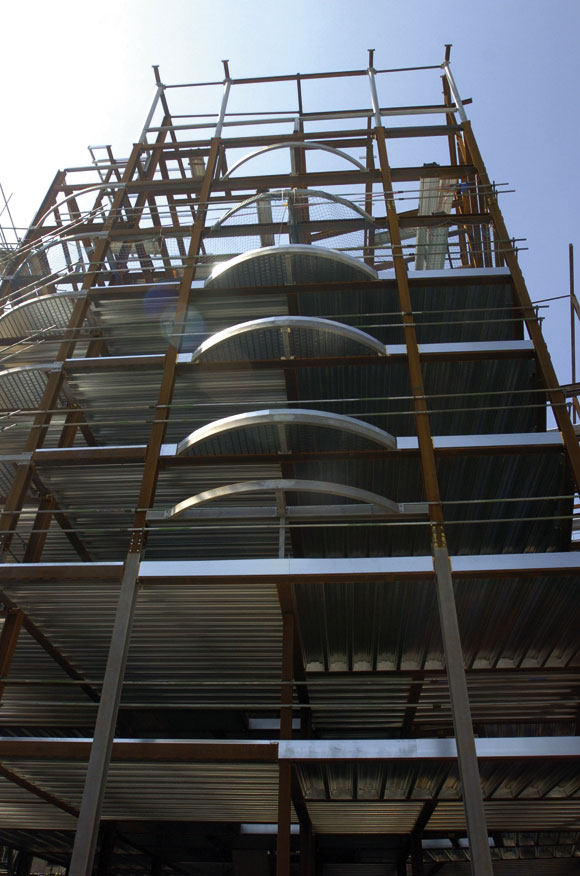 To reverse this nighttime migration to the outer areas of the city, there are a number of downtown residential developments currently under way or planned.

Many first time buyers can’t usually afford city centre apartment prices, but in Plymouth a whole range of accommodation is being built to suit most budgets.

An example of this is the Ballard Centre development, currently under constructed on the former site of a municipal swimming baths.

This ten-storey residential block will contain 120 flats, from one-bedroom studio flats up to three bedroom duplex apartments on the upper levels.

After acquiring the site and demolishing the existing structure Prestige Homes, the developer and contractor, had a plan to build luxury apartments. However, in keeping with local housing market requirements, the plan was altered to the present multi-apartment configuration.

“At first the plan was to build a concrete structure,” explains Mr Coles. “But once a building containing numerous sized apartments was decided on, the steel option was the obvious choice.”

Airey & Coles had previously made use of the Slimdek flooring system by Corus and quickly put forward the idea to the rest of the project team.

Slimdek is an engineered floor solution developed to offer a cost effective, service integrated, minimal depth floor for use in multi-storey steel framed buildings with grids up to 9m x 9m.

It extends the range of cost-effective steel options for modern buildings. The ease of planning and servicing, combined with a reduction in building height, the system allows for a fast and efficient construction programme.

The system was also ideal for this project according to Mr Coles, as the project team wanted to keep the structure to a maximum of 10-storeys and, most importantly, they wanted the quickest construction programme possible.

“Once we’d explained the construction efficiency benefits, everyone agreed to the Slimdek option,” says Mr Coles. “And the design change from a concrete structure to a steel building was in place.”

Overall the building is roughly a rectangle measuring 58m x 28m, and the design was to incorporate 12 flats of varying sizes on each floor.

The structure is divided into two conjoined halves, one nine levels high and the other ten storeys, both topped with pitched roofs. The structure sits on top of a basement car park which takes up most of the development’s footprint.

Steelwork begins from the basement concrete slab and a complex grid pattern then remains constant throughout all of the building’s levels.

“This is probably the most complex grid pattern I’ve ever worked with,” says Mr Coles. “It was a real challenge working it into the car park design.”

The pattern never exceeds 7.5m x 7.5m, and the grid takes its complexity from the array of apartment sizes on each level.

“The flat sizes and configuration may change from floor to floor, but the grid pattern doesn’t change,” explains Mr Coles.

The ground floor of the building will be let to retail outlets, while above this all floors will be residential. From first level to sixth, there will be a mixture of one, two and three bedroom units, while the upper levels will be predominantly luxury apartments. The side of the building with ten levels will incorporate duplex units – taking up levels 9 and 10. 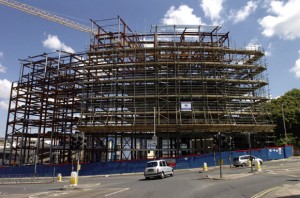 The development is making use of approximately 400t of Asymmetric Slimflor Beams (ASB) for all floors, which is being installed with the SD225 deep decking from Corus Panels and Profiles. These two products comprise the main elements of the Slimdek solution. The ASB’s have an embossed top flange to enhance composite action with the concrete flooring encasement, while the larger bottom flange supports 225 metal decking.

Steelwork contractor SIAC Tetbury Steel has erected 280mm deep ASB’s throughout and these allow for a completed floor depth of 320mm. Around the perimeter of the building and inside the entrance hall, 250mm x 150mm RHS sections have been used as these members are more efficient and architecturally desirable. They can also resist torsional forces caused by eccentric loading on the beam better than other alternative sections.

“This system has proven to be much faster than any alternative options and although we have a thinner floor make-up all services can still be accommodated,” says Mr Coles.

A site spokesman for Prestige says the scheme is weeks ahead of the schedule envisaged for a concrete building. “As well as allowing other trades to immediately follow on behind the steel erection, there is also less equipment and plant needed on site.”

Mark Fox, SIAC Tetbury Project Manager, says the steel erection programme is ahead of schedule and will be complete by July.

“We divided the programme into halves, and once one section of the building was completely erected we were able to hand-over to allow the decking to commence.”

Working in this fashion, once the second half of the structure is erected, Studwelders who are install-ing the SD225 deep decking as well as pouring the concrete slab, will immediately start decking this portion of the building. Another considerable time saving will be made by the use of FibreFlor instead of metal rebar throughout the development.

FibreFlor eliminates the need for steel mesh, which saves time and has an added on site health and safety benefit through reduced handling.

“The grid pattern, although quite complex, hasn’t been difficult for us to erect and it’s worked out very smoothly and quickly,” comments Mr Fox. “Our main challenge was the confined site and so every load of steel had to be delivered in erectable bundles.”

All steel is being erected by only three erectors using two 135ft reach cherry pickers. “These units can reach up and over the entire project,” says Mr Fox. “And as the erection programme comes to an end and the space for these machines gets less, their huge capacities will become more important.”

Summing up, Andy Dart, Managing Director of Prestige Homes, says: “Getting this project up and out of the ground was of utmost importance and by using steel with the Slimdek system means the project is 12 weeks ahead of where we’d be if we’d used concrete. A number of people have also commented on how quickly the job is rising up, it’s becoming a landmark building even before it’s complete, which is also very gratifying.”

The Ballard Centre is scheduled for completion by mid 2008.