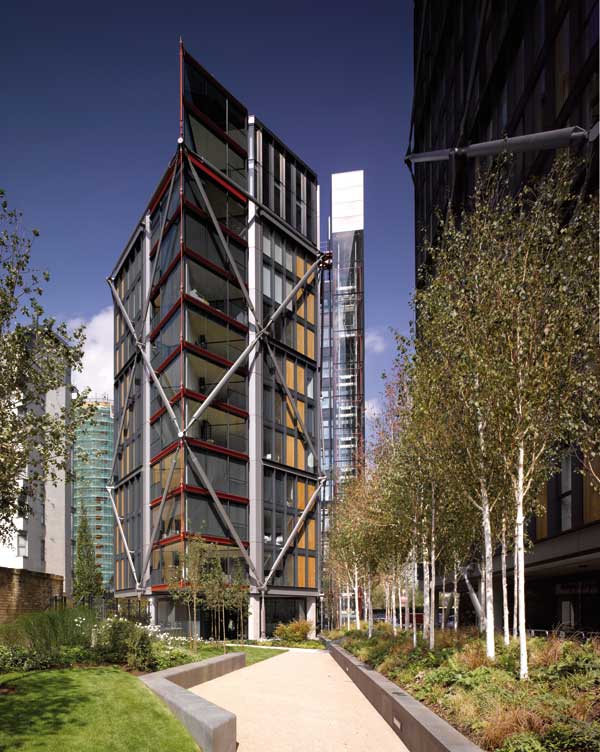 NEO Bankside is the first major residential scheme in the UK to feature an external steel bracing system.

The systems serve three key purposes: to provide lateral and overall stability; to reduce the requirement for shear walls allowing greater internal flexibility, and to provide support for the winter garden elements at the prows of the buildings.

Initially the design incorporated an internal perimeter bracing system, but this was reviewed and external bracing was chosen as it offered a simpler interface with the cladding.

Stability forces are transferred into the external perimeter bracing via nodes, which are arranged on a six storey interval vertically and on a sequenced interval horizontally.

The nodes transfer the lateral stability forces into the bracing system. Lateral loads from the intermediate floors are transferred to the nodal floors by reinforced concrete walls arranged around the core. 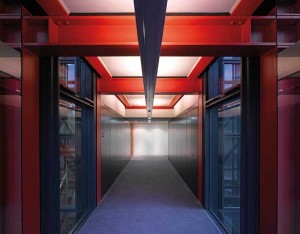 Prefabricated spindle and node fin plate assemblies were delivered to site on 4.5m long steel stanchions that were then embedded within the primary concrete columns. Fabrication and site erection tolerances had to be very tightly controlled to ensure that the bracing elements would fit between the node fin plates, although some adjustments were possible via a counter threaded fork end connector.

The bracing sections taper at their ends and attach to the node fin plates via cast fork ends, with close tolerance pins of up to 100mm in diameter.

The colour of the external perimeter bracing was an important factor affecting the structural design, with implications to the range of thermal stresses and movements to which the system would be subjected.

The external diagrid bracing system provides gravity load support to the promontory winter gardens at each end of the pavilions by utilising a system of external hangers or struts at their apexes.

The offset of the bracing from the façade means that a fire inside the apartment would never reach sufficient temperatures at the bracing members to require intumescent treatment; also, the system has been designed to remain stable even if, due to a catastrophic fire in one apartment, up to three nodes failed.

Site installation of the nodes was particularly challenging because of the extremely tight tolerances that were required. The accurate positioning was achieved by adapting a two stage concrete pour strategy which allowed the nodes to be fixed and held back securely to the partially complete concrete structure with temporary supports, while the second pour was carried out which then locked them finally in position.

“The use of exposed steelwork has helped us add delicacy and grace and humanise high density living,” explains Graham Stirk, Project Architect. “The bracing systems were also a more cost effective solution and have now become selling points with buyers requesting nodal apartments.”

Summing up, the judges say this project is outstanding in its rigour and attention to detail. Intelligently conceived, designed and beautifully built, it is clear that the whole team was immersed in every aspect.