Steel to the rescue 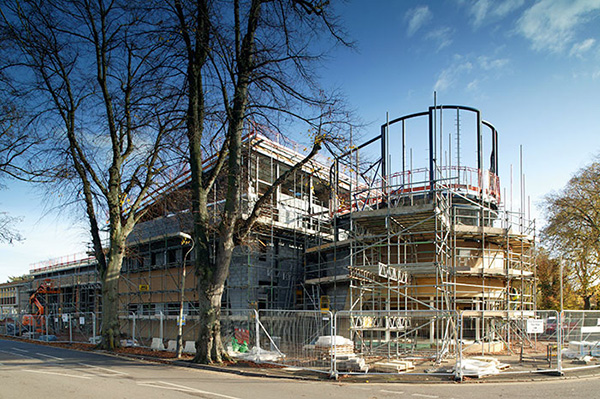 Flexibility and speed of erection were behind the decision to choose structural steelwork as the framing material for four new fire stations in Gloucestershire. NSC reports.

Fire station design has changed in recent times. Gone are the days when these ubiquitous establishments were the sole preserve of the red fire engines and their company of firefighters, today they are also buildings for the general public offering meeting rooms and, in the case of one, a life skills centre (see story at bottom of page).

Known as community fire stations, four of them are currently under construction for Gloucestershire County Council. Two each in Cheltenham and Gloucester, all of these stations will feature the traditional fire engine (appliance) depot area and its adjacent office block and firefighter living quarters, but they will also contain community areas where local residents can take advantage of facilities such as free meeting rooms.

“We want to invite and welcome local people into our new fire stations,” explains Peter Thorp, Project Manager for Gloucestershire Fire & Rescue Service. “These new buildings will be part of the community offering more than just the traditional firefighting services.”

Main Client: Gloucestershire Fire & Rescue Service
Architect: Calderpeel
Main contractor: Kier Moss
Structural engineer: WYG
Steelwork contractor: Adstone Construction
Steel tonnage: 500t
NSC visited one of these new facilities, Cheltenham East Fire Station, a new structure being built on the site of the town’s old fire station on Keynsham Road. In order to get this project started, once funding had been assured earlier this year, the town’s fire service had to move to a temporary site to allow for demolition. 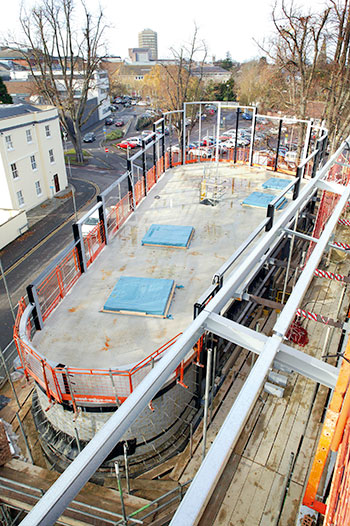 Main contractor Kier Moss started its work with a refurbishment programme of the nearby temporary premises, prior to starting on the new station. After demolition and groundworks were completed, steelwork erection was able to begin in June.

A number of criteria favoured the use of structural steelwork, but most importantly, “steel was chosen for these projects for its flexibility,” explains Project Architect Mark Massey of Calderpeel. “Using steel has allowed us to future-proof the living quarters and office spaces as the partition walls could be moved if the client wanted to rearrange the layout.”

Jim Seager, WYG Project Engineer adds: “Speed of erection was also an important factor in steel’s favour, while the only alternative may have been load bearing masonry, but these buildings have two-storey elements and they are too high for that option.”

Steelwork erection was carried out by Adstone Construction, while metal decking installation was contracted to MSW. The Keynsham Road site is quite tight and once the frame started to go up space for materials storage was at a premium.

“Small loads brought to site on a just-in-time basis was the order of the day,” says Paul Ingram, Kier Moss Senior Site Agent.

Structurally the fire station is divided into three parts, the appliance bays (where the fire engines reside), a two-storey zone for the fire officers and the adjacent community zone, which is separated from the rest of the building by a covered ‘street’.

A large column free space was required for the vehicles and Adstone formed this with six 5m wide portalised and braced bays. A high floor to ceiling height is also needed as maintenance to the vehicles will be carried out in the appliance zone. Consequently the area has a 7.3m high roof which will allow the largest fire engines to raise their cabs within the structure.

The rear of the appliance area has a large rooftop canopy and this required Adstone to erect a 30m-long truss to support the feature. The truss is spliced at third points and represents the largest single steel element for the whole project.

Next door is the attached two-storey operational area, which is a braced beam and column zone featuring a pitched roof. This will accommodate locker rooms and showers for staff, a fitness suite, toilets, a kitchen and a spacious area where crews can eat meals and relax. The ground floor will have offices, while a plant room is located on the upper second floor.

An enclosed covered ‘street’ housing the main entrance, divides the operational part of the fire station from its self-contained community area. This is a two-storey element, again a braced beam and column structure, which will house toilets, a refreshment area and adjoining prayer/baby changing room. Adjacent to this is a lecture and training room with a folding partition so the area has the flexibility to be extended into one large space. 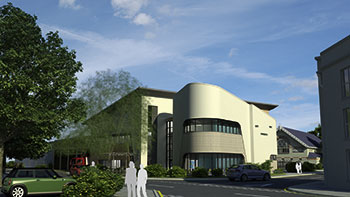 Architecturally the community area stands out from the rest of the fire station as it has a curved facade, formed with a series of faceted beams and it is also structurally higher.

“There’s a void space above the first floor area as we wanted the corner of the building to be high and act as a focal point,” says Mr Massey.

As well as integrating the community area’s design, the project also had to take into account its location. Much of Cheltenham town centre consists of a conservation area and the new fire station, with its easy lines, pitched roof and curved front facade, has to blend into its neighbourhood, much easier than its predecessor did.

The lozenge shape of the fire station is also a result of having an adjacent listed building. “The fire station splays out at the community area end, this is a direct result of the need to preserve views of the adjacent College Baths building,” sums up Mr Massey

Cheltenham East is due to open in April.

The same team of companies, headed by Kier Moss, are also constructing the three other community fire stations. All of them are similar in size and layout to Cheltenham East, and all of them are steel framed structures. Uckington is the other location in Cheltenham for a new fire station, while Gloucester has two under construction – North and South.

Gloucester South (pictured above) is the largest of the four projects, and one which will also accommodate a Life Skills Centre. Attached to the main fire station buildings, the skills area is housed in a 23m x 38m clear span structure, formed with a series of mono-pitched rafters.

“Jim Seager of WYG says: “Commercially, steelwork was the most viable option to cater for the spans over the life skills exhibition area.”

The Life Skills Centre has been designed to help people of all ages learn about safety in general. A number of risk and consequence scenarios, using real-life exhibits and film footage, as well as slips, trips and falls avoidance zones, will be housed within the building.