Regeneration in the frame 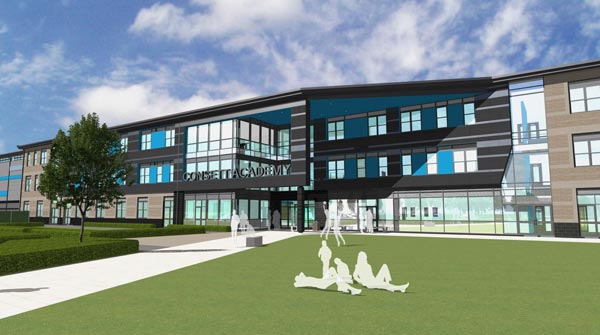 A steel framed academy and leisure centre form part of the ongoing regeneration of a once prominent steel making town.

Sadly in 1980 the steelworks closed down, followed by the local coalmines, heralding the end of heavy industry in this
part of County Durham.

Very few historical reminders of the steelworks exist today, although steel is continually playing a vital role on a number of large-scale regeneration schemes that have taken place in Consett, including new industrial estates and distribution centres. 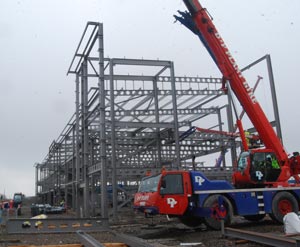 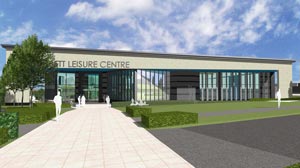 As well as being part of the academy during school hours, the leisure centre will be open to the public at other times

The latest development to use steel is the Consett Academy and Leisure Centre, currently under construction on the town’s former football ground.

The academy will replace and bring together students from two existing colleges, while the leisure centre will supersede a current facility located nearby.

The two distinct facilities of the project are part of one large steel framed structure, measuring more than 120m long × 32m wide. Both will have their own main entrances at either end of the building, while internally the academy and leisure centre will be separated by secure lockdown doors, allowing them to either operate independently or as one large centre during academic sports times.

This dividing line which splits the steel frame in half was consequently also chosen as the best point to locate an integral expansion joint that was needed as the frame is so long.

Structurally the building is a braced frame utilising the diaphragm action of the slab for overall stability. The slabs are formed with approximately 8,000m² of Tata Steel ComFlor 60 metal decking with a 150mm deep concrete topping.

The academy’s steelwork is predominantly based around a 7.5m grid pattern with intermediate secondary beams spaced at 3.75m centres.

The academy part of the steel frame is mostly three-storeys high, with the exception of a triple height central entrance hall and atrium, and a ground floor double height drama hall.

The entrance hall and atrium is one of the main features of the building. It is centrally placed and runs nearly the full length of the academy. Classrooms are located either side of this large central space with corridors and balconies overlooking the void.

“The beams will be left exposed within the completed building and support a series of roof lights; they have been painted white to accentuate their appearance and help brighten up the atrium,” says Neil Gibson, Harry Marsh Project Manager.

On the opposite side of the expansion joint, the leisure centre is predominantly a two-storey high frame, with the majority of its floorplan taken up by two large double height areas that accommodate an aquatics zone and a sports hall.

Because the site incorporates a slope, the leisure centre’s ground floor adjoins the academy’s first floor. However, some excavation work has taken place to create basement areas for the leisure centre that accommodate gymnasiums and the swimming pools.

About one third of the leisure centre accommodates the aquatic zone which has two swimming pools, one that is 25m long and another 12m long learner pool.

Creating the open spaces for the pools are two rows of 12m high CHS tree columns, each with four tubular branches (see diagram) that support glulam rafters. These features columns are spaced to create internal spans of 10m, 6m and 16m, in the aquatic centre.

“In general support steel gets hidden away within the building fabric, but with the steel tree columns we had an opportunity to do something different – putting it on display and expressing it, which given the history of Consett is important,” says Gareth Denny, TPS Project Engineer

A more traditional design has been used for the leisure centre’s sports hall as this is formed by a series of spliced 35m long cellular beams spaced at 7.5m centres. The leisure centre also features squash courts, a café and changing rooms.

Consett Academy and Leisure Centre is due to be completed and open in mid 2015. 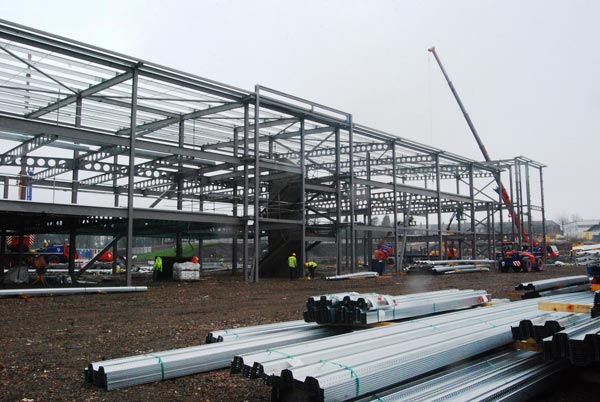 Construction work started last year (2013) with an extensive groundworks programme that included levelling some parts of the previously sloping site and grouting old mine workings.

“There were a lot of old 19th Century mine workings on this site, some as deep as 25m,” says Kevin Leighton, Carillion Construction Manager. “Many of the mineshafts were deeper than previously thought and consequently the grouting programme lasted longer than anticipated.”

To keep the programme on schedule, steelwork contractor Harry Marsh (Engineers) was able to begin the steel erection while the groundworks were still being completed.

Some of these works, such as the installation of a ground floor slab and the concreting of the leisure centre’s swimming pools, will be finished once the entire steel frame is up.

“Steel erection began at the academy end of the project as the leisure centre part required more groundworks, such as excavation of the pools,” explains Mr Gibson.

Harry Marsh is using a combination of mobile cranes and MEWPs for the erection. The steelwork is brought to site from Harry Marsh’s Sunderland fabrication yard on a just-in-time basis, as there is little room for storage.

“As the frame nears completion the amount of storage space on site gets less,” sums up Mr Gibson. “So coordination between all of the trades is important to the project remaining on schedule.”

Tata Steel’s ComFlor 60 composite floor profile offers a lightweight steel decking for all multi-rise buildings including car parks. It combines exceptional spanning capabilities with reduced concrete usage to provide a cost-effective and attractive floor solution that is easy to install.