Intech is a new 3,500m² educational interactive science centre commissioned by the Hampshire Technology Trust Ltd. Hampshire Technology Trust Ltd is a local charity set up because of concerns about the quality of scientific training in schools and the lack of interest that school children had in science and technology. An exhibition centre was created with the vision to set up a hands-on science experience to help local schools in their teaching of science and technology in an inspirational way. The success of the centre meant that expansion was needed if the quality of the service that Intech provided was to improve.

The client’s brief for the new Intech building was to provide a large exhibition hall and café with associated administrative and teaching spaces and a 200 seat lecture theatre that had the potential for future conversion into a planetarium within a limited budget of £5M. To complement the scientific use of the building the architect’s design was based on simple geometric forms cut into the chalk hillside. The lecture theatre was designed as a domed building linked to the main pyramidal exhibition hall via a two-storey glazed link corridor.

The client wanted a building that would not only achieve the spatial requirements but would also allow visitors to understand the form and function of the building. Thus the vision was for the building to have the potential to be used as a learning tool, hence the building form needed to be simple to understand both in terms of structural form and building services strategy.

The architect’s initial concept for the exhibition hall roof was to have four plates leaning together supported on concrete buttresses to form the pyramid shape. The space needed to be column free so the roof had to be capable of spanning the 50m width of the building. To achieve the concept of a plate it was proposed that a form of grillage structure was used. 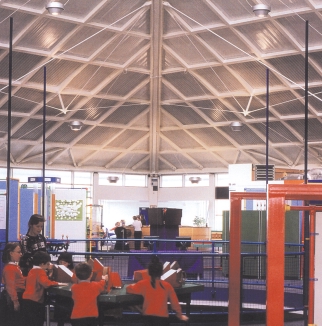 The roof is designed to be two-way spanning thus moment connections were required at all joints. It was decided to fabricate the roof panels in longitudinal ladder frames and to minimize site welding the joints were designed to be contained within the profile of the SHS members.

The auditorium structure was designed with UB curved ribs expressed below CHS purlins curved to form full circles, each circle being of a different radius. The UB ribs are built off a reinforced concrete retaining wall that supports the earth banking which is mounded around the base of the auditorium. There are simple bolted connections between the CHS purlins and the UB rafters that are hidden above the top flange of the ribs.

Intended to house exhibits to inspire children towards science, engineering and technology, the structure itself intentionally demonstrates structural form and strategy. Its striking pyramidical form triggers the inquisitiveness and appreciation of both children and adults, even if not wholly understanding the full extent of engineering achievement involved.