Reaching new heights in the Midlands

Artist’s impression of the finished scheme

That perception may be about to change, as a new landmark 23-storey student accommodation scheme has claimed the accolade for Coventry’s tallest building, excluding the nearby cathedral spire.

The scheme consists of four interlinked steel-framed blocks, ranging in height from the eight-storey Block C to the tallest element, the 23-storey high Block B. Meanwhile, Block A has 14-storeys and Block D tops out at 21-storeys, technically making it Coventry’s second tallest tower.

“This is the highest project main contractor Winvic has ever built,” explains Project Manager Martin Overfield. “The company is well-known for constructing distribution centres, but we are now diversifying and recently completed a similar job for the client in Leicester, although that was low-rise compared to this scheme as it only had eight-storeys.”

Winvic started work on site during October 2017, and began by installing piled foundations in readiness for the steel erection to begin. The plot had previously been used as a surface car park and the client had already remediated the site before Winvic arrived. 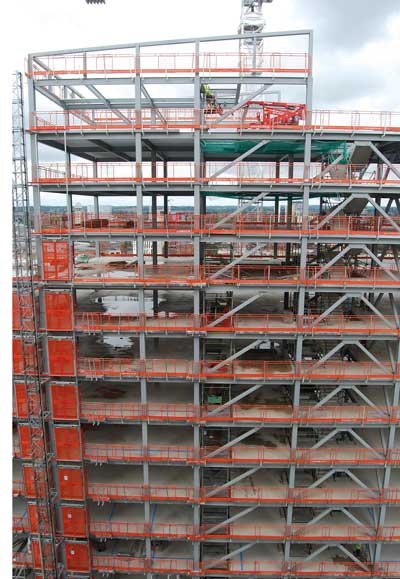 Steel has provided the required speed of construction

The choice of a steel-framed solution for the scheme was made solely for the material’s speed of construction.

“Getting the accommodation completed as quickly and efficiently as possible was upmost in our initial discussions with the client,” says Mr Overfield. “Consequently, we went for a steel frame construction with metal decking as it is the fastest method.”

This design decision has proven to be the correct one as after only 11 months on site 315 bedrooms were already completed. Block A and a portion of the adjacent Block B were handed-over in September, just in time for the new University term.

By the following month (October), steelwork contractor Caunton Engineering had competed the majority of its programme, having erected Blocks A, B and D, and then completing Block C.

“For logistical reasons Block C was erected last as it’s situated in the middle of the scheme on what was our delivery area,” explains Caunton Engineering Deputy Erection Department Manager Richard Patterson.

A final piece of the steelwork jigsaw will be completed in February when Caunton will return to site to erect 26t of steel that forms a single-storey podium deck situated in front of Block C. This will accommodate ground floor retail units and a landscaped private garden on the first floor.

Caunton Engineering has been employed on a design and build contract for the scheme. The company’s Senior Structural Engineer Colin Winter says: “Although there are four blocks and a podium, much of the steelwork is fairly straightforward and repetitive as each of the accommodation blocks have identical floor plans.”

The four accommodation blocks have widths between 13m and 15m, with only one internal column line. These members are offset from a central line, allowing them to be positioned one side of the corridor that separates two rows of bedrooms on each of the block’s floors.

Meanwhile, perimeter columns are generally set at 6m or 7m intervals, with stability for the frames derived from full height vertical bracing systems.

The bracing forms steel cores around stairs and lifts, which are located in the two tallest towers, Blocks B and D.

“The entire scheme is essentially two large steel frames, separated by a movement joint between Block C and B,” explains Mr Winter.

The regimented tower block grid lines even include non-bedroom areas such as the ground and first floor areas which will accommodate retail and student communal areas.

Some of these areas will be subjected to higher loadings and so larger beams, measuring 350mm × 300mm, have been installed at first floor level in Block A where a student gym will be located.

The majority of Fairfax Street Student Accommodation will be handed over to the client in August 2019. 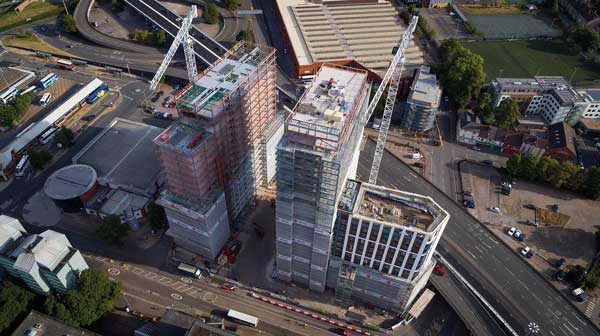 As the steel frame of this project began to rise, the cranes used to lift the steelwork had to be changed.

“All of the steelwork up to level nine was done using mobile cranes, positioned in the building’s footprints and on the plot where Block C now sits,” explains Caunton Engineering Deputy Erection Department Manager Richard Patterson.

“Once we reached floor 10, it was more cost-effective to use tower cranes so Winvic installed two units, which were then predominantly used for the steel erection.”

The site’s two cranes are 75m and 85m tall respectively, and are the largest tower cranes ever managed by Winvic.

Due to the height of the cranes, Winvic says it has had to inform the Aviation Authority of the position and height of these cranes as they are a potential hazard to low flying aircraft. At night both cranes display red warning lights to help identify them to aircraft, as units this high are unusual in Coventry.

For the erection programme, Caunton used MEWPs positioned on the ground floor to work in conjunction with the cranes. However, once the erection sequence progressed beyond level 14, the MEWPs did not have the required reach.

“You can get MEWPs with a longer reach but they are expensive to hire and use, and as the floors were yet to be concreted we used a bespoke platform system that supports the MEWPs on the already erected steel frame,” says Mr Patterson.

As the steel frame progressed upwards, two floors at a time, the tower cranes would then lift the frames to their next position and then place the MEWPs, in readiness for the next stage of steel erection.