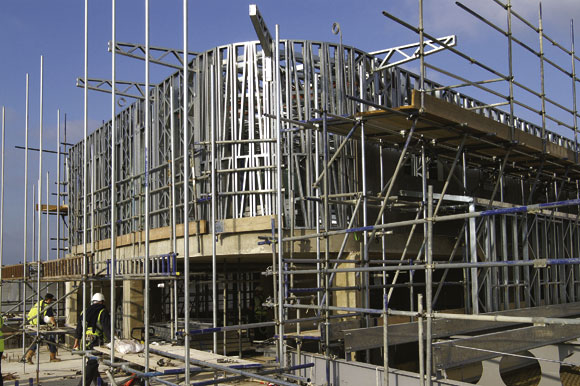 The hotel is constructed from a single skin light steel frame

A new extension to a shopping centre in Windsor has made use of a hot rolled steel frame alongside another light steel four-storey hotel structure, all built on top of a concrete podium.

The King Edward Court shopping centre occupies a prestigious town centre site next to Royal Windsor railway station. The work has consisted of reconstructing a large portion of an existing mall to include an area once occupied by a number of individual retail outlets and an office block.

Level 5 and 8 only exist on the hotel portion of the project, due to the differing floor heights.

Two of the challenging aspects of the project were tying-in the new build structure to the retained existing concrete shopping mall, as well as keeping the service road – which runs right through the project at the lowest level – open to traffic throughout the construction programme.

“There are some complex interfaces at different levels to the existing car park and the retained mall,” comments Gavin Walker, Project Manager for Peter Brett Associates. “And these areas had to remain open throughout the construction programme. 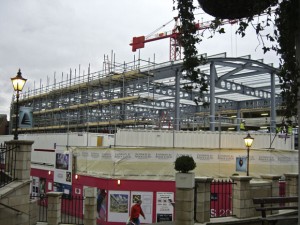 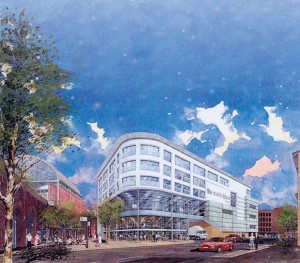 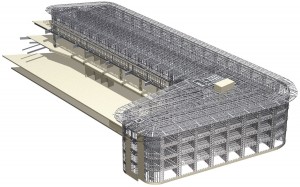 A number of complex interfaces had to be overcome on the structure’s many levels, some of which connect into retained buildings

“As well as these issues, the tenants pretty much dictated the form of the retail zone and so we’ve ended up with a hybrid form of structure. In-situ and pre-stressed concrete lower down with hot rolled steel and light steel for the upper levels, all forming one monolithic structure.”

The podium at street level was constructed in concrete, and this includes Levels 1 to 3. The retail Level 3 shopping area is accessed only via escalators from the Level 4.

The decision was taken to use concrete as it was deemed easier to marry this into the existing shopping centre, while achieving the clear storey heights. However, from the Level 4 slab upwards, the tenant’s requirements for long spans meant hot rolled steel was used for the two upper retail levels.

“Basically all the levels – main retail mall, hotel entrance station entrance and car park access – come together at Level 4,” explains Mr Walker. “The concrete slab for this floor ties-in with the upper floor of the existing shopping centre and a retained mall which gives access to the railway station.”

Approximately two thirds of the two upper levels of the retail zone were constructed with hot rolled steel members springing off the concrete slab and a pre-stressed concrete transfer bridge built over the service road.

Incidentally, the back third of the entire structure is all concrete up to the top level, as this section of the building surrounds the project’s four stability-giving main cores.

“There was a requirement for minimal bracing because of the structure’s glazed cladding, which wraps around one side of the building, so the frame had to be moment resistant,” explains Peter Stocks, Allslade’s Project Designer.

To incorporate this a bay deep truss, made up from CHS sections, ties the glazed frontage all the way back to the concrete cores.

Forming the roof of the new retail extension Allslade erected a total of 40 cellular beams which were 21m-long x 900mm-deep.

The cellular beams were so long that Sisk had to leave a sizeable gap in the podium’s slab to allow the members to be lifted into the shopping centre. “Lifting the beams over the project from outside the site wasn’t an option because of the site’s location,” says Mr Stocks.

“As well as offering lighter loads on top of the concrete podium, steel was also used because of the need for long spans within the retail zones and the speed of construction,” adds Mr Walker.

Another integral element of the overall structure is located on the street-side of the project. This is the new Travelodge hotel which has been constructed primarily with light steel framing. The hotel, which also sits on top of the podium, but also has one floor within the concrete structure, comprises cross-walls generally at 3.8m spacing, and in some locations, up to 5.9m spacing.

The load-bearing light steel framing was manufactured and installed by Metek UK in just four months, while the contract was extended to include the infill walls to the concrete structure of the lower levels.

This project is also one of the first to use a new flooring system from Metek and Lafarge which consists of a gypsum screed on steel decking attached to lattice joists.

The composite design of the gypsum screed acting with the joists greatly increases the stiffness of the floor and its acoustic insulation, while adding modestly to the mass of the floor.

Known as Metekfloor, the system consists of a light steel floor construction coupled with a fast-drying screed. On this project it helped the rapid completion of the three floors in just four months.

Tests at the University of Surrey have shown that the composite action of the screed and light steel lattice joists increases the stiffness by over 100% and dramatically reduces vibrations and sound transfer through the floor.

The roof of the hotel structure was also designed as large braced panels in light steel framing and a 1.5m cantilever prow was added for visual effect. This was achieved by tapered lattice members attached to the cross-walls. The purlins for the roof are 100mm x 1.6mm C sections and span between cross-walls.

The top level of the hotel is larger than all preceding floors and extends by wrapping around and over the retail area.

“It’s unusual to build a monolithic structure with four main materials,” sums up Mr Walker. “But the retained structures and tenant requirements dictated the overall form.”