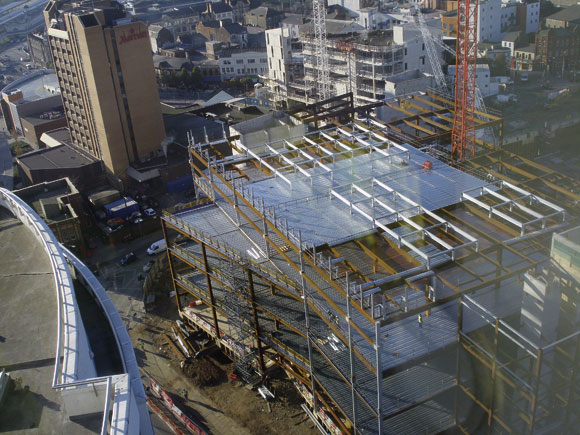 The original design for the St David’s 2 project in Cardiff has been modified to incorporate greater use of steel. This has produced a scheme which is proving to be quicker and more efficient to build, primarily because of a number of transfer structures reports Martin Cooper.

On leaving Cardiff Central railway station one can’t help notice how much construction activity there is currently in the city. The place is a hive of building work and the largest and most prominent project, by far, is the St David’s 2 development.
This giant mixed-use scheme in the heart of the Welsh capital will transform a large swathe of the city centre and includes a 24,163m² John Lewis department store, an indoor retail mall with 89,881m² of medium-sized stores, car parking for 2,500 vehicles, restaurants, bars, public amenities, a residential apartment block and affordable housing.

Predominantly retail-led, the project is one of the most important city developments in the UK and is currently the largest private financial investment in Wales. Situated on the site of an old shopping mall and car park, the scheme also incorporates the redevelopment of the adjacent and existing St David’s centre which will be linked into the new scheme via a footbridge.

Main contractor Bovis Lend Lease has a £300M design and build contract for the new build, and a further £40M contract to refit and enlarge the existing shopping centre. 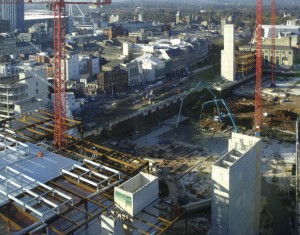 The project initially required a large earthmoving operation with 270,000m3 of overburden removed 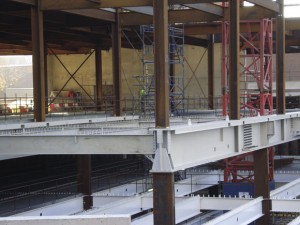 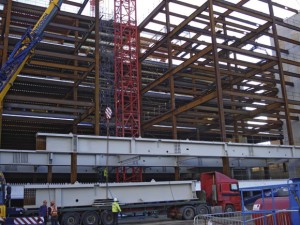 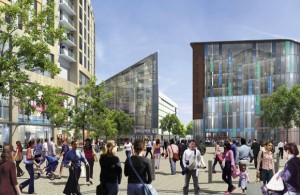 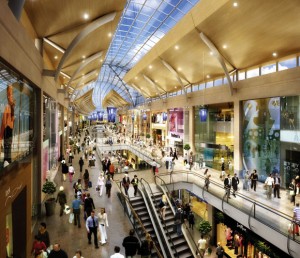 “The old centre will have one extra floor added above Debenhams and a bridge will then allow both centres to form one large shopping mall,” explains Nick Wylie, Bovis Project Director.

Work on site started in earnest early last year with a large-scale demolition scheme followed by an earthmoving operation which saw 270,000m² of overburden removed to create the project’s 10m-deep basement level.

The sub-structure of the project consists of a concrete raft slab – with more than 5,000t of rebar – with a steel main frame springing directly up from this. “We worked closely with the engineers to design and modify the original design into a part-steel, part concrete structure,” explains Mr Wylie.

The two basement car park levels are subsequently formed with steel columns and beams. Above this there are ground floor steel transfer beams which then supports the three floors of retail in the shopping mall and also the three trading levels of the John Lewis store.

Although the John Lewis anchor store is essentially a stand alone steel structure and linked to the rest of St David’s 2 by two bridges, it does however share the basement car park levels.

Using steel for the substructure and ground floor transfer structure brought with it a number of cost and programme advantages. “Steel was a major part of our tender,” says Mr Wylie. “A steel transfer structure, as opposed to a concrete one, is more efficient as it is shallower and required less dig, which then resulted in fewer truck movements.”

The ground floor is the project interface between the retail structural grids and the car park. “This called for the use of transfer beams,” adds Mitesh Patel, Associate with Ramboll Whitbybird. “These transfer beams are steel plate girders in lieu of a post-tensioned solution, previously suggested, and therefore they avoid the need for progressive post tensioning, sliding bearings and substantial movement joints.”

There are three types of transfer beams used at ground level. The first type occurs where the retail/upper car park sits above the service yard. Nominally these transfer beams are 22.5m long, but in order to minimise the section depth the transfer beam is continuous with two adjacent spans.

The ground floor transfer beams were generally installed in lengths of up to 16m, each 1.5m deep and weighing on average 20t. They also take into account the differing grid patterns of the basement levels and the upper retail zones. The basement car park has a 16m x 9.6m grid and this reduces to 7.5m x 8m for the retail mall area, and 9m x 9.6m in John Lewis.

Mr Wylie says the speed of construction, associated with steel, has played an important role. “Steelwork has been erected simultaneously with the concrete being laid. Once concreting has been done in one area, it is then handed over to William Hare and they begin erecting steel immediately.”

Bringing steel and other materials to an inner city site, surrounded by busy roads, can be problematical and the St David’s site is no different. Even though the site covers a large area there is still little room for storage. All materials, are closely coordinated and brought to site as needed from a large storage depot Bovis has acquired outside of the city limits at Wentlow.

Another structural challenge was presented by the mall’s roof. This forms the interface between the retail steel structure and the post tensioned concrete structures that form a 1,900 space multi-storey car park and seven-storey residential blocks. Here there was also the need to install large transfer structures to accommodate differing grid lines.

To enable future flexibility within the structure and simplify the process for the manipulation of the building to suit initial and future tenant requirements, a degree of redundancy has been built into the structure.

“This should help increase the life span of the building, allowing it to evolve with an ever-changing retail market,” adds Mr Patel.