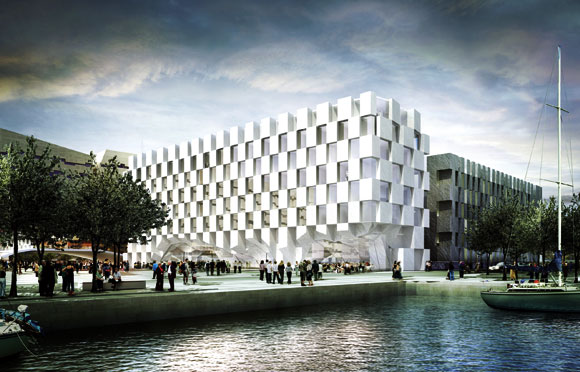 A new steel framed hotel in Dublin, originally tendered as concrete, is rapidly taking shape in the city centre. Martin Cooper reports on one of the most innovatively complex steel designs ever produced in Ireland.

Dublin has for a number of years been a hive of construction activity, with one area in particular, the Docklands, seeing more than its fair share of new buildings. Situated to the east of the city centre, the former warehouses and industrial units along the River Liffey have been converted into office blocks and residential apartments.

In the middle of this area is the Grand Canal Square development which will have in its midst one of Ireland’s most exciting and innovative steel structures.

Provisionally known as the Grand Canal Quay Hotel, this complex steel structure has already received a number of glowing reports in the local media. Once complete it is sure to be one of Dublin’s most luxurious and prestigious hotels.

“The building was originally designed in concrete with a trapezoidal bridge structure for the transfer structure at first floor,” explains Denis McNelis, Engineering Director of Andrew Mannion Structural Engineers (AMSE). “But due to a number of programme advantages afforded by steel, the decision was made to change to a steel frame.”

AMSE together with Arup have since undertaken to deliver a highly complex alternative and one of the most innovative steel designs ever seen in Ireland. 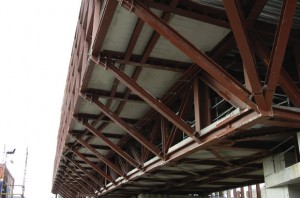 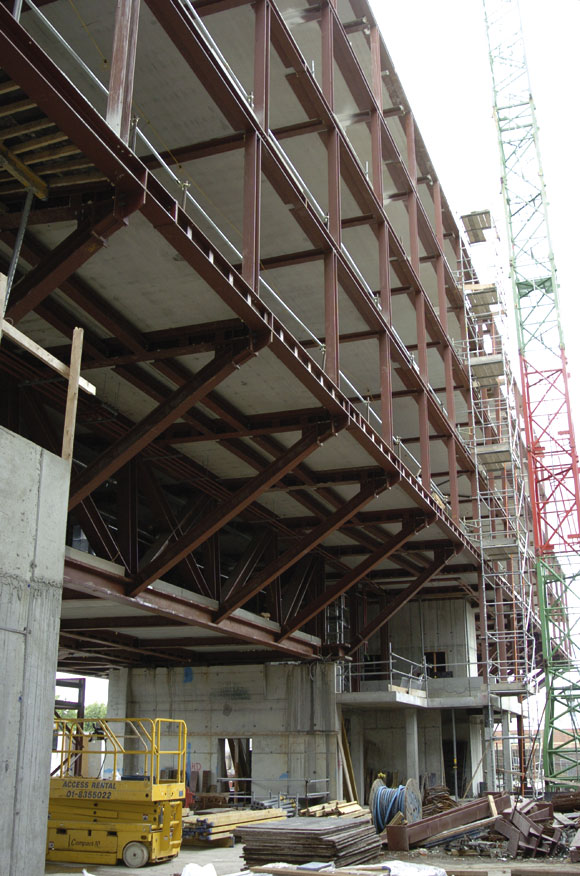 The hotel’s lobby will be below the transfer structure

“The design was complex for a concrete structure, even in its original form,” adds Mr McNelis. “And steel has a number of benefits, not least the speed with which it can be erected.”

The hotel features an eye-catching and dramatic column-free lobby which required a storey deep transfer structure consisting of primary and secondary trusses, supporting a six-storey beam and column frame. This open plan lobby area is only interrupted by the three main cores, which will house lifts and staircases.

The lobby will be one of the hotel’s main architectural features, says Ray O’Connor, Senior Project Engineer for Arup. “The ultimate design is supposed to give the impression that one is looking through a large hewn opening in solid rock.

The lobby interior will eventually be clad around the cores to resemble rock and a clear view from street level will be afforded straight through the structure.

The supporting transfer structure consequently sits between ground floor and mezzanine levels, and will be used as an office and hotel staff accommodation area.

The most heavily loaded connection between the 65m multi-span secondary truss to the primary truss is transferring a huge 3,000t through 100 bolt connections.

As there are huge loads being transferred between the trusses, and a large number of bolt holes that had to be aligned, the tolerances available for erection were extremely tight. The corners of the structure are cantilevered through multiple trusses in two directions, with the load path from the corner column to the support point on the concrete wall being more than 15m in length.

Another complex issue which had to be overcome was the fact that the corners of the cantilever are actually trying to twist the building. To stop the twist more than 100t of bracing was used to tie back the cantilever corners.

“Using one 500t capacity mobile crane, positioning each section of the transfer structure required some precision lifting and exact setting out, with little or no room for error,” says Mr McNelis. “Careful planning in terms of connection design, detailing and fabrication allowed the structure to be lifted into position smoothly.”

Providing the required stability, the transfer structure is also held in position by a number of rock anchors buried 2.5m deep into the concrete walls with 100mm thick base plates.

Every connection on the transfer structure was individually designed. “There isn’t any repetition, they are all unique,” adds Mr McNelis.

Once the transfer structure was erected AMSE’s phased steelwork programme started on the upper storeys of the hotel. This part of the project was equally challenging as the steel frame had to incorporate an architectural chequerboard pattern.

This pattern is actually part of the frame as Mr McNelis explains: “Rather than just a style gesture, it requires the steel columns to be offset relative to the floor below at alternate levels to accommodate the position of the building’s glazed panels, and so achieving a thin continuous vertical joint. Basically the cladding dictates this part of the project.”

AMSE has installed 203 x 203 columns all the way up, with each member offset by 350mm, centre line to centre line. As well as the offset columns, all beams are slightly skewed in plan and consequently so are the rooms.

Alternate floors have the columns in the same location, and mirroring this, each level of rooms has a configuration swap-over. This mainly involves the location of bathrooms, which have been installed as complete 5t pods, which had to be taken into account when designing the overall structural loading.

The hotel, which has a footprint of 85m x 21m, isn’t the entire project, as attached to the rear of the structure is a seven-storey residential block. Although this structure is essentially concrete framed with architectural steel perimeter columns, it does have a large steel presence at its heart.

The ground floor of this tied-in adjacent block is taken up by the hotel’s banquet hall. To allow for a large column free area, AMSE has erected fifteen 13m-long 914mm beams across the hall to support the ceiling.

Summing up a unique steel project Mr Mannion, says: “In terms of design this project is the most complex and challenging project we have ever undertaken. The job also presented significant fabrication, erection and design challenges, to match the architectural vision.” 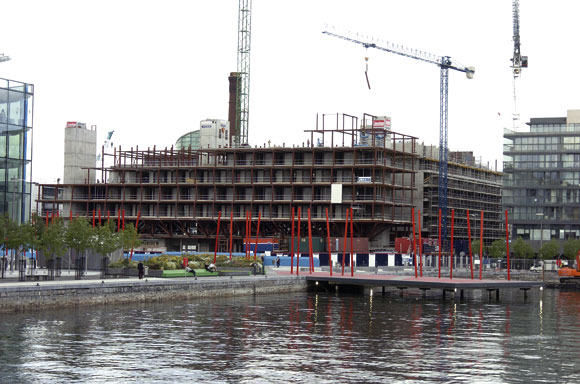