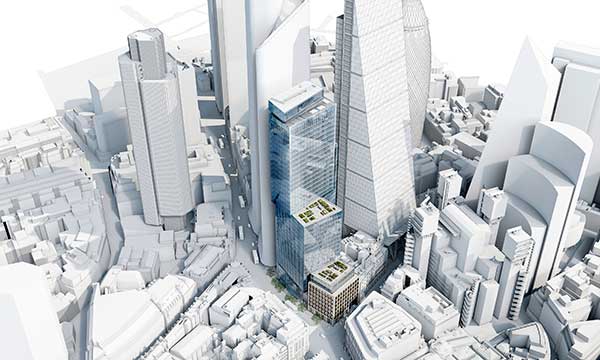 Mitsubishi Estate Company (MEC) London has unveiled plans for a new £900M skyscraper to be built in the heart of the City’s insurance district.

The Japanese investor, which has appointed Stanhope as development manager on the project, will shortly submit an application for a new 40-storey office building on the site currently occupied 6-8 Bishopsgate and 150 Leadenhall Street.

The Wilkinson Eyre-designed building will boast a 71,500m² gross area, including a public viewing gallery at level 40 and ground floor shops and restaurants.

The steel-framed design features a series of stacked blocks which taper as they rise.

Leases in the existing buildings expire at the end of this year, paving the way for a potential start on site in 2016, subject to planning.

The scheme is sandwiched in between British Land’s and Oxford Properties’ completed Cheesegrater and the vacant 22 Bishopsgate site, where an Axa-led consortium will shortly submit plans for a new scheme to replace what would have been the Pinnacle.

MEC London Chief Executive Naoki Umeda said: “The submission of this application represents Mitsubishi Estate’s confidence in the City of London’s long-term growth prospects as a world financial centre, and its attractiveness for blue chip companies.”