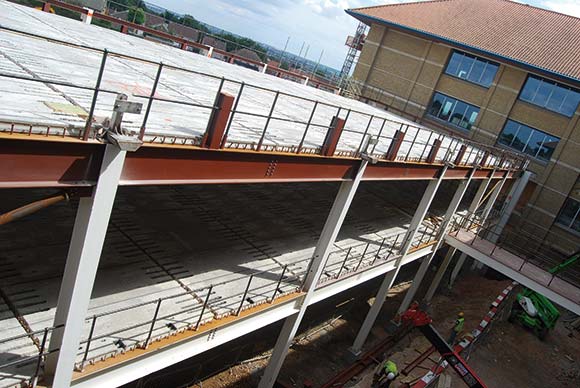 The London Borough of Bexley is extending and refurbishing a former building society headquarters into civic offices.

Situated on a prominent town centre site, the Woolwich building is a well known local landmark. By refurbishing and extending the building, the council says it not only preserves the structure, it will also enable it to bring together office based staff from four ageing sites saving more than £1M a year in the process.

The work will also act as a catalyst for further developments and regeneration. Once the council vacates its present town centre site, a large mixed use scheme is due to get under way.

Steel is playing a significant role in the project, as a new two-storey extension to the rear of the building and the reconfiguration of parts of the existing structure are relying on steel construction.

Speed of construction is one of steelwork’s many attributes and the extension, which accounts for 200t of the overall steel total, took only two weeks to erect.

Built around a regular grid pattern, which includes some 16m long spans, the extension is structurally independent, gaining its stability from strategically positioned cross bracing. However, it is linked to the old building by three first floor steel footbridges and between the extension and the existing structure, a covered internal space (atrium), containing a café, will be created.

The ground floor of the extension will house the new council chamber and its public gallery, as well as a series of meeting rooms. Above this, on the first floor there will be offices for the council leader and members.

The council chamber is accommodated within the middle portion of the ground floor and occupies a large open plan column free space. The construction of this important feature was one of the drivers for choosing a steel frame for the extension.

“We looked at a number of options and a steel composite solution using precast planks was the most economical,” explains Bennetts Associates Project Architect Franziska Michel.

“Steel offered us the slimmest form of construction and helped us maximise the floor to ceiling heights.” 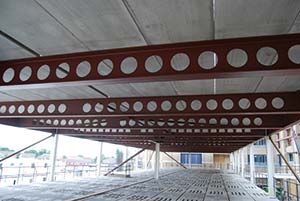 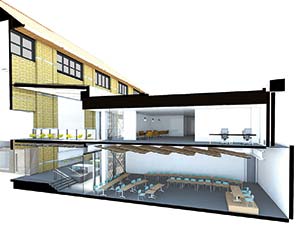 Exposed steelwork is a feature of the council chamber

Only a 50mm topping has been added to the planks, while the supporting beams are all cellular sections. These beams accommodate service integration, which in turn further helps the project’s aim for a slim and economical design.

To further increase the available headroom in the column free council chamber, it will feature a sunken floor, increasing the floor to ceiling height by 0.8m.

The covered courtyard or atrium separating the new extension from the refurbished building will have a glazed roof, allowing plenty of natural light to penetrate the space.

“We had to construct a series of steel H-frames within former window recesses of the existing building to accept the steelwork for the atrium roof,” explains Gregor Hunter, Graham Wood Operations Director. “The frames have a stub onto which the box sections are bolted, while stubs on the new steel frame pick up the beams on the other side.”

For most of the steel erection Graham Wood used a single 50t capacity mobile crane, while the installation of the precast planks (also in its remit) required a much larger 220t machine.

Prior to erecting the extension Graham Wood installed steelwork for a new floor within the existing structure. A former deeds store, located towards the rear of the building was converted into back-of-house space and offices.

Formerly this large storage area occupied a large double height space, but with the installation of new steelwork the project team filled in the void and increased the available office space on the first floor.

Steel channels were bolted to the existing columns to strengthen the structure. They support a new steelwork grillage that has been topped with steel floor decking to create a new and additional part of the first floor slab.

“This helped to create more office space within the reconfigured building and aided the design to make the environment modern and open plan,” explains Ian Scott, London Borough of Bexley Project Manager for Major Projects.

Summing up, Andrew Sweeney, Mace Project Manager says: “We are very proud to be delivering a project that will lead to the regeneration of a locally important and respected building.”

Completion of the work is scheduled for spring 2014 and the council is set to move into its new civic offices next summer.