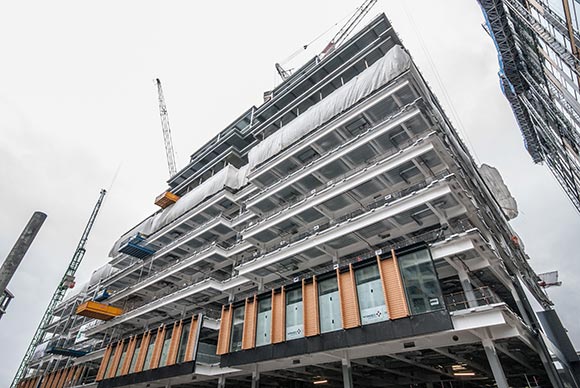 The building is clad in terracotta and glass

A new UK headquarters for a European banking organisation is quickly taking shape with the aid of a steel frame. Martin Cooper reports from Pancras Square.

One of the largest regeneration schemes currently taking place in Europe is radically transforming the once rundown industrial zone north of King’s Cross Station into a new and vibrant neighbourhood.

Described as a new piece of London with a brand new postcode, London N1C (as it will be known) will include 50 new buildings, 2,000 new homes, 20 new streets and 10 new public squares spread over 67 acres.

One of the initial phases of this huge and ambitious development is Pancras Square. Located between the busy rail terminals of King’s Cross and St Pancras International, the scheme consists of seven retail and commercial buildings situated around a central public square.

This is a prestigious site with abundant nearby transportation links. Consequently a number of high profile companies are taking advantage and one of the first structures to be constructed is 6 Pancras Square, a new UK headquarters for Paris based BNP Paribas Real Estate. 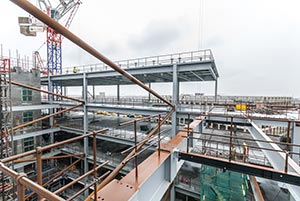 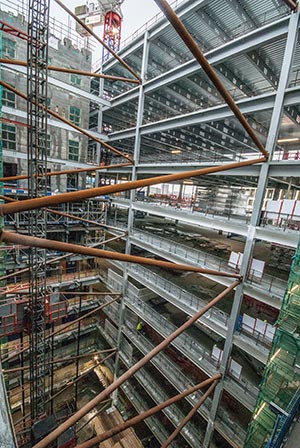 Temporary steel supports the atrium until the floors are cast 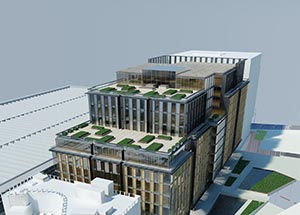 An 11-storey steel framed structure, it will create 39,500m² of office space, with some ground floor retail, based around a large central atrium.

“A steel option was the only realistic choice for this project as the client wanted a City spec office building with long clear open spans,” explains Steve Toon, AKTII Project Director.

Erected by Severfield-Watson Structures, the building is formed with a cellular steel composite frame which is both lightweight and economic.

The use of Fabsec cellular beams has allowed the project team to integrate all of the services within a constant and efficient structural zone created by the consistent depth of the beams.

The M&E contractor and Severfield-Watson shared the project’s structural model early in the design process and used Building Information Modelling (BIM) to ensure all of the cellular beams were fine tuned and arrived on-site with their openings in the correct position as well as the right shape and size.

Based around a large 15m × 9m grid pattern, the steel frame starts at level one – which links to the upper level of the project’s shared podium (see box) – and extends upwards fairly uniformly to the rooftop.

“We came to site before our main programme started and erected level one steelwork which then allowed the concrete contractor to complete casting the remainder of this floor’s slab,” explains Richard Tarren, Severfield-Watson Structures Project Manager.

“We then returned to site a few weeks later and erected the rest of the frame during a three month programme.”

Below the steelwork there is an insitu basement zone which also incorporates a mezzanine level adjoining the street level along Pancras Road. The basement links into the lower level of the podium and is founded on more than 200 CFA piles.

The steel frame wraps around a centrally located atrium which is glazed at rooftop level, ensuring plenty of natural daylight will penetrate the building’s inner office space. At either end of the large void there is a slipformed core, each one containing three lifts.

Steelwork is connected to, and gets its stability from, the two cores. However a feature of the architectural design means the cores are very slim in order to maximise space. Separate steel framed service risers are attached to the outside of the main cores and the main steel frame could not encroach into these areas.

“We had to install a temporary CHS bracing system in these areas which was installed outside of the structural zone. After the floors were cast and stability achieved, the temporary steelwork was removed,” says Mr Tarren.

The atrium also accommodates two pairs of scenic lifts, which have required approximately 50t of architectural steelwork. A series of spliced purpose made cruciform columns extend from ground floor entrance area all the way up to the eleventh floor, supporting and concealing the lift’s guide rails.

In keeping with the rest of the Pancras Square development the building is subject to planning restrictions limiting its height. To conform, the structure is stepped, rising from south to north via two terraces on the eighth and eleventh floors.

The economic form and consistent floor depth of the steel frame is maintained even for the transfer structures that form the terraces. “Fabsec sections have been used here too, but have thicker plate for the extra loadings,” says Mr Toon.

Affording views over the City of London to the south, the two outdoor areas will provide the building with pleasant breakout areas and function space.

The eleventh floor terrace is accessed from a large rooftop function room, or meeting area. The remainder of this uppermost level is given over to a plant deck which is shielded by a 3m high steel mesh fence.

The project is due for completion in October this year. 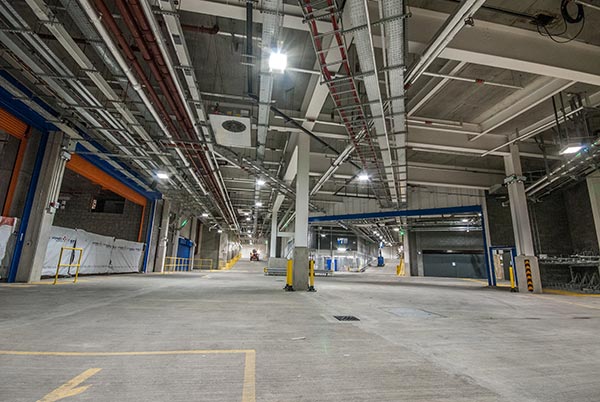 When the project is finished the podium will provide a shared delivery basement for all of the surrounding buildings, while the upper level will be landscaped and turned into a public realm.

The podium’s usefulness during construction meant it was the catalyst for the entire scheme and so speed of construction was vital. The initial design envisaged a concrete podium but this was altered to a steel frame with precast floors, a decision that ensured the structure was completed on time and quickly,

“Having the completed podium has been extremely useful to our project as the adjacent Pancras Road is very busy and unsuitable for unloading materials,” says Phil Willmott, Vinci Construction Project Director. “Deliveries such as steel are delivered directly to site and stored on top of the podium before being erected.”

Pancras Square will eventually consist of seven retail and commercial buildings arranged around the wedge shaped podium and public realm. As well as the BNP/Vinci project, BAM is nearing completion of two other commercial structures, while Kier is currently working on a office and leisure centre for Camden Council. Two more steel framed office blocks are planned to start later this year, occupying plots currently being used as contractors’ compounds and offices. The square’s seventh building is a restored Victorian tenement block being converted into shops. 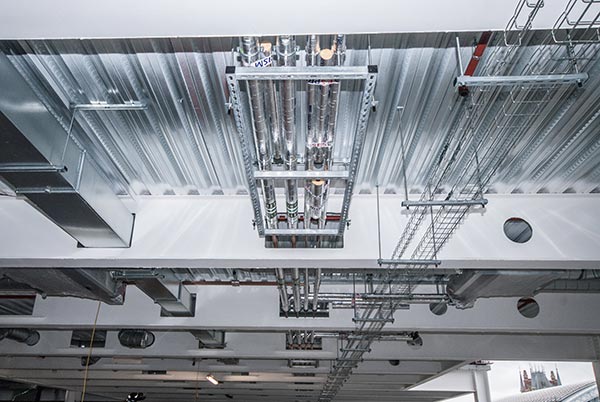 Dr Richard Henderson of the SCI considers the use of cellular beams for the integration of building services and structure.

The integration of building services with the structure is an important issue in the design of the floor beams. The zone which remains when the clear height of the usable space is deducted from the storey height serves multiple functions and must accommodate many different elements. These include some or all of floor finishes (usually a raised floor); horizontal structure (floor slab and beams); building services (lighting, small power, supply air ductwork or chilled water, fan-coil units or diffusers, exhaust air ductwork, perimeter heating pipework); ceiling. Arrangement of these elements of construction to take up the shallowest zone is desirable.

Various approaches to services integration have been tried including truss-beams, tapered sections to allow ducts under and castellated beams. The latest form of castellated beam is the cellular beam in which the characteristic hexagonal openings in the original beam are replaced by more visually appealing circular openings. Cellular beams are usually designed to act compositely with the concrete floor slab. The beams take up most of the ceiling void and all services have to pass through the openings in the beam web. Adjacent cells can be joined together to create elongated openings to accommodate rectangular ducts.

The depth of the “parent” beam is increased by 40% to 60% in forming the cellular openings. For an increase in depth of 50%, the plastic modulus of the cellular beam is increased by about 66% and the second moment of area is increased by about 270%. Examination of section tables for beams with equivalent properties shows that a cellular beam is approximately 66% of the weight of an equivalent strength beam with a solid web. In terms of stiffness, the equivalent percentage is about 60% These values correspond to weight savings of 25 to 35 kg/m depending on whether the choice of beam is strength or stiffness-governed. In a 15m × 9m bay, assuming secondary beams at 3m centres and 54 linear metres of beam per bay, this adds up to a potential weight reduction of 1350 to 1890 kg in an area of 135 m². Over a floor area of 39,500 m², this represents a weight reduction of 400 to 550 tonnes of steel.

The use of cellular beams clearly results in a valuable saving of steel weight in floor beams. SCI publication P355: Design of composite beams with large web openings is a useful reference for the design of beams required to integrate with building services.