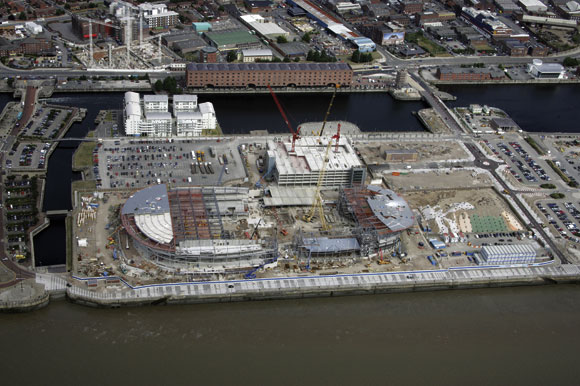 The project rises up on the former docks site

Liverpool is gearing up to become European City of Culture 2008 with the construction of an impressive new arena and convention centre. Martin Cooper reports.

Liverpool’s city centre is currently a hive of construction activity. A major redevelopment and new build project, known as the Paradise Street scheme, is set to transform much of Liverpool’s rundown centre, while a stone’s throw away along the banks of the Mersey the impressive Kings Waterfront project is now beginning to take shape.

Located on the site of the former Kings Dock, Kings Waterfront is the single largest development in Liverpool and is being jointly promoted by a partnership of Liverpool Vision, English Partnerships, Northwest Regional Development Agency and Liverpool City Council.

Their aim is to create a visitor destination of international quality combining arena, conference and exhibition facilities – a centrepiece for Capital of Culture celebrations in 2008 –  with a development of residential, hotel, office, retail, leisure, community and public open spaces.

The initial part of this huge project is the construction of the Liverpool Arena and Convention Centre which comprises a 9,500 capacity arena; an auditorium seating 1,350; a multi-purpose hall and 18 meeting rooms.

Built on the banks of the Mersey, the project involved some extensive groundworks before steelwork erection could begin. As Buro Happold’s Project Principle Angus Palmer explains, the site was formerly occupied by dockside warehouses and wouldn’t have been able to sustain the new structures without new piles being driven in to the ground.

The Arena and Convention Centre both sit on a 3m-high podium, and this also required some major earthworks to be carried out by the main contractor Bovis Lend Lease. 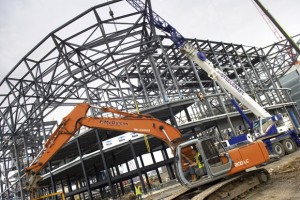 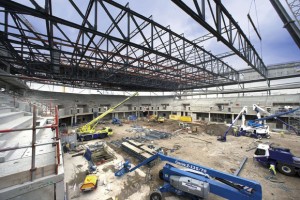 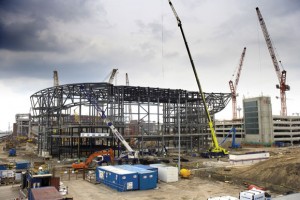 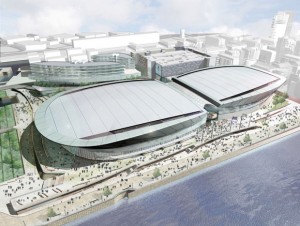 Essentially the Conference Centre is a completely steel-framed structure while the adjoining Arena is a steel framed building sitting atop a concrete bowl, which lies beneath the top level of the podium.

Once complete both the Arena and the Conference Centre will have the flexibility to cater for events of differing sizes. For this reason, the Arena’s floor links directly via the Galleria – a steel-framed 13m-high structure that joins both structures – into the lower level of the Conference Centre. Combined, this amounts to 7,000m² of near column-free exhibition space. The lower level of the Conference Centre measures 80m x 50m and is one large open multi-purpose exhibition room. In order to create the necessary open plan exhibition area, steelwork contractor Watson Steel has installed three pairs of large perpendicular trusses.

Alex Harper, Watson’s Project Manager says the trusses accounted for some of the heaviest lifts of the job and consisted of members measuring 50m-long x 4.5m deep. These were craned into position in pairs to give four 20m spans. The trusses also carry all necessary ductwork and a maintenance walkway within their depth. On top of the trusses there is a double layer composite concrete slab which was installed to insulate the different levels from noise.

Meanwhile, on the Conference Centre’s second level there is the auditorium, which covers just over half of the floorspace, 18 meeting rooms – with the largest holding 500 people – as well as kitchens and all other back-of-stage amenities.

Damian Rogan, Buro Happold’s Senior Engineer on the project says in effect the Conference Centre is all column free. “As the lower level doesn’t have columns it wouldn’t have made sense to start on the second floor, and anyway the auditorium also needed an open plan design,” he explains.

“This level of the building was probably the most challenging aspect of the project,” Mr Rogan says. “Getting the auditorium and meeting rooms to actually fit into the available space was difficult.”

The 1,350-seat auditorium is constructed with a number of raking beams to create a dish-shaped arena, with pre-cast concrete slabs for the seating steps. The auditorium has a 15m deep stage at one end and facing this are two revolving seating areas known as ‘drums’. Each holding 300 seats, these ‘drums’ can rotate 180-degrees and form two separate auditoriums, with their own stages, within the main arena. The ‘drums’ sit on a steel turntable which has radiating spokes which support a lightweight steel frame for the movable seating area. The turntable, in turn, is supported by the large trusses below.

Steelwork has been used throughout the Conference Centre and the supporting superstructure of the building consists of 20m-long CHS 400mm-diameter columns supporting an array of steel beam work.

The adjoining Arena is also a steel-framed structure from podium level up and is constructed with predominantly 406 CHS columns. The Arena has two-tiers of seating formed by 300mm wide x 1m deep rakers at 10m centres, and these support pre-cast concrete slabs for the terracing. Above this there are VIP boxes with a wrap around balcony.

Mr Harper says the arena is being constructed with steel columns and beams supporting rakers and a truss roof. “A typical football stadium design, except for the roof,” he says.

At the arena’s southern elevation – facing the Galleria and conference centre – there is an acoustic wall, while the rest of the arena is bowl shaped and features terracing. At the outside of the curved northern elevation there is a large cantilever which is supported by 12 tapered Y-shaped columns.

Not only do these 400mm x 300mm RHS Y-columns support the curved end of the arena but they also support extended rakers which form the structure’s entrance. Being supported by these same columns is the arena’s three layers of cladding, which consists of traditional glazing, a green translucent covering and a metal rain screen.

Spanning both the Arena and Conference Centre are two curved cantilevered steel-framed roofs. “Steel was utilised to create the seamless architectural curves,” Mr Rogan says. “There is some complicated geometry involved and only steel would have worked.”

The Conference Centre roof is made up of 6m deep primary trusses sitting at 10m centres supporting 406 UB connecting beams with 6m spans. There are also secondary trusses which are 3m deep at 6m centres. All of this steelwork was needed to create the large spans over the auditorium and meeting rooms.

Both the Conference Centre and Arena roofs are made of two layers, with the lower section forming an acoustic barrier while the upper section will provide protection from the elements, as well as some additional acoustic properties. Between the two layers a 900mm void will consist of an insulation layer and an air gap.

The Arena roof steelwork consists of some very long trusses, the longest of which are 80m-long and weighing close to 100t. These members were lifted into position in two separate 40m lengths. To give the Arena roof its curved effect the trusses vary in length and depth, from 6.5m to a minimum depth of 4m.

Each of the two curved roofs have deep grooves, or slots, running along their length, and these areas contain plant rooms. The roof structures are also clad with bespoke sound proofing panels.

Watson Steel estimates it will complete its steel erection by the end of the year and full and final fit-out of the buildings is due to finish sometime during the Summer of 2007.

Before the Arena and Conference Centre are complete the next stage of the Kings Waterfront scheme is due to begin. An adjoining multi-storey car park is already nearing completion, but a hotel and residential buildings will start soon. The banks of the Mersey will never be the same again.