Posted on July 15, 2014 by NSC in Shortlisted, SSDA Awards, This month's featured stories 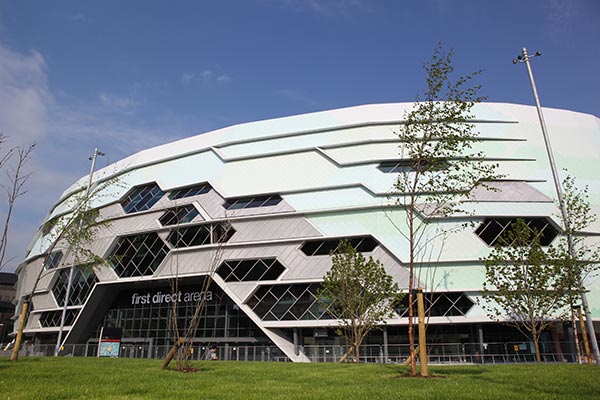 The project’s footprint demanded the UK’s first fan-shaped bowl, overlooking a stage set into the slope of the site. Creating the arena’s large clear spans demanded a steel solution and a total of 13 roof trusses spanning up to 72m were installed.

Innovation and collaboration between project team members enabled an increase in truss depth, minimising their weight while still achieving the same acoustic performance and maintaining the same overall depth of the roof zone.

“Acoustics were very important and we needed to design a structure that was an isolated box because of the project’s urban site,” explains John Rhodes, Project Lead Architect.

The project’s roof was a major innovation responding to cost and performance issues. The solution was a folded roof, falling towards the stage to reflect the profile of the site and seating, with a large recessed plant area above the stage for air handling units.

“A 4D BIM model was utilised for the entire construction sequence enabling visual illustration of residual risks, such as lifting the PA truss and ultimately speeding up the project,” says Jim Bell, Arup Project Director.

BAM has measured the benefits of using a BIM model as saving 1,000 design coordination issues.

A large, complex, entertainment venue on an inner city site, requiring highly demanding acoustic constraints to limit noise break-out. The large spans dictated a steelwork solution, and the use of steel has been a key component in enabling the sculptural form of the building, while being a highly visual element of the internal environment.