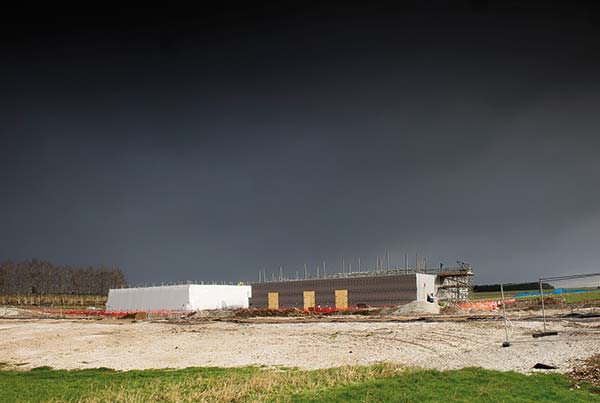 Facilities at Stonehenge, one of the world’s most famous prehistoric sites, are being transformed by a number of improvements.

Central to the works is a new steel framed visitor centre being erected by S H Structures (SHS), working on behalf of main contractor Vinci Construction.

The centre will comprise of two braced 35m² pod structures housing an exhibition area, a café with indoor and outdoor seating, a shop and a dedicated education space.

Covering the pods will be a large undulating canopy roof, supported by a series of raking RHS columns.

S H Structures is currently erecting the columns and the roof, all of which has to be temporarily supported with props and scaffolding until the entire structure is complete.

The roof is being formed by a series of RHS ladder sections, which are transported to site in two pieces before being welded together.

“It is a time consuming job with a lot of on site welding,” says Ian Mitchell, S H Structures Project Designer. “Infilling between each ladder section involves welding a number of individual pieces.”

The overall project also includes a new car park and coach park, while a section of the A344, which runs next to the World Heritage Site, is due to be closed at the end of June and grassed over to improve the site’s setting.

Designed by architect Denton Corker Marshall, the visitor centre is due to open later this year