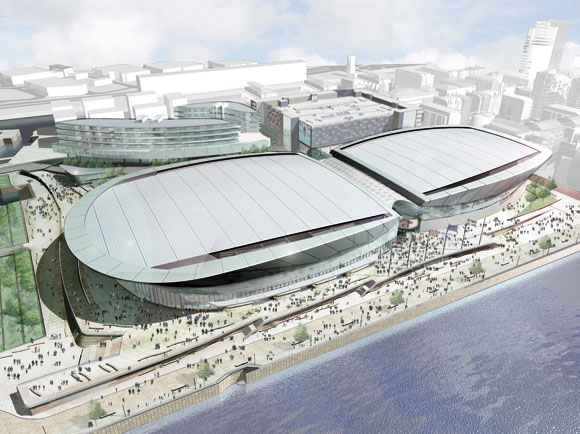 Liverpool’s riverfront will be transformed once a new arena and convention centre is completed in time for the city being European City of Culture in 2008.

More than 6,000t of structural steelwork is being supplied and erected by Watson Steel for the project on the banks of the River Mersey.

Forming part of the Kings Waterfront development, the overall project is the largest on-going scheme in Liverpool and has been designed by architects Wilkinson Eyre.

The centrepiece of the development is the Liverpool Arena and Convention Centre, which comprises a 9,500 capacity arena; an auditorium with a capacity of 1,350; a multi-purpose hall and 18 meeting rooms.

The arena will have the flexibility to host events ranging from concerts to children’s entertainment, and from ice shows to tennis, boxing or gymnastics. The convention centre can also be configured to cater for audiences of different sizes.

Alex Harper, Watson Steel’s Project Manager said: “By the end of August we were approximately 70% finished, and final steelwork completion is scheduled for mid-November.”

The arena is being constructed with steel columns and beams supporting rakers and a truss roof. “A typical football stadium design,” Mr Harper said.

He added the convention centre is a more complex steel design with a beam and column make-up and big perpendicular trusses forming a double-floor lay-out.