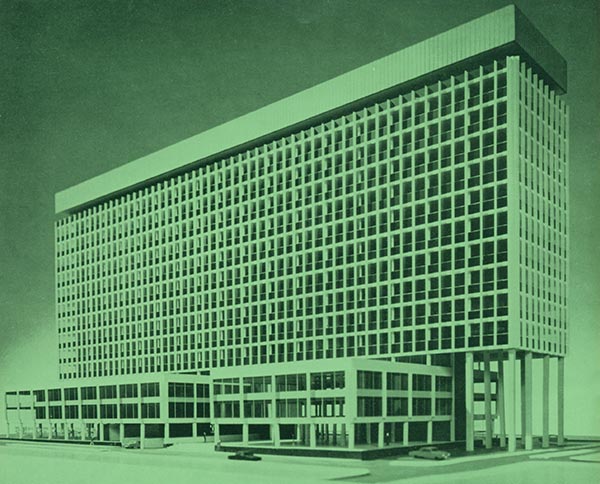 From Building With Steel May 1964

Two features of particular interest are to be found in the 18-storey office building at present under construction in Liverpool for Littlewoods Mail Order Stores Ltd. It is the largest structure in Britain to use to any great extend high-yield stress steel to BS 968: 1962 (about 1,500 tons) and to utilise rigid welded steel frame construction.

When completed, the four storey podium will occupy an area of 400 ft by 136 ft and the 400 ft by 70 ft tower will be more than 200 ft high from ground level. The work is being done in two stages, the first of which represents approximately 60 per cent of the building and utilises in the region of 2,200 tons of steelwork: two thirds of this is high stress steel. 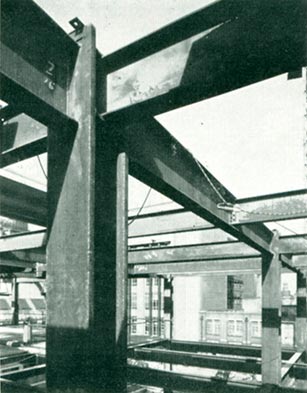 During the planning studies a very interesting fact emerged. It was found that the cost of a structural frame in welded high-yield steel, including fireproofing and the precast concrete slabs was in the region of 14/4d per square foot, where as the closest estimate for any alternative method of construction was about 14/7d per square foot. Other advantages of the steel frame of particular note are (1) that the structure has minimum bulk and thus leaves more internal space available and (2) it allows maximum freedom in internal architectural planning.

Steelwork Data
As mentioned earlier, the framing is designed on a fully rigid basis, the main frames being fabricated in high-yield stress steel to BS 968:1962 with full strength site welded joints at each floor level. Secondary steelwork is of mild steel with wind connections using high-strength friction grip bolts.

The main frames are built across the building, running north-south, at 22-ft centres. They are designed as individual frames to resist wind pressure and all vertical loads, analysis being carried out by computer at the Manchester college of Technology after approximating the sections required. As a matter of interest the following data is given. The maximum vertical dead plus imposed load on one column is 1,150 tons with a maximum wind thrust of plus and minus 68 tons. The maximum moment at steel base level from wind plus vertical load effects is 190 ft. tons.

The frames for the 70-ft wide tower have four stanchions at 22-ft centres. The podium has an additional 11-ft bay at the southern side of the building and a further three bays of 22 ft, 22 ft and 11 ft to the north. The secondary steelwork consists of floor beams at 11 ft centres spanning between the main frames. 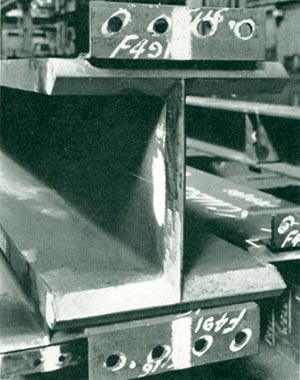 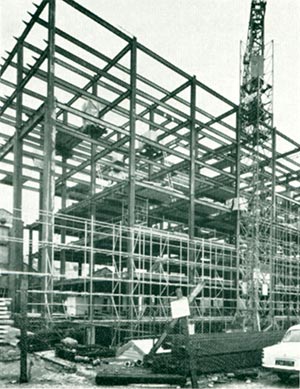 The floor beams are UBs of three serial sizes, 21 in by 8¼ in, 18 in by 7½ in and 16 in by 7 in, the weights of the beams being varied according to the loads and moments carried.

At the east and west ends, where the tower oversails the podium, the tower supports are all-welded high-yield stress steel box columns extending from foundations to the fourth floor. These stanchions each consist of two 18 in by 1½ and two 33 in by 1 in plates welded together to form a 36 in by 18 in box and are free standing from the ground floor, i.e. for 50 ft of their length. A special built-up stiffener unit, shaped in the form of a universal column section and welded into the top of the box stanchion, is used to facilitate connection of the next length of stanchion above.

Site welding
Great care has been taken to ensure welded joints of great quality. For instance, before any site welding was carried out, all welders were tested at the works of the steelwork contractors. During construction, site welds were tested, as required by the consulting engineers, by non-destructive methods.

Fire Protection
Regarding fire protection, the stanchions to basement and ground floor in the car parking areas are encased in concrete to give four hours protection, and the beams in those areas have lightweight preformed casings to give the same fire grading. The framework to lift and staircase cores is also encased in concrete. In other cases the steelwork is clad throughout in lightweight preformed casings giving a fire grading of two hours.

Floors
The building is enclosed by curtain walling supported from cantilevered floor panels, completely free of the structural framework. The floor units consist of precast concrete slabs 7 ft 4 in wide by 11 ft long by 5½ in thick. These floor panels were lifted into position by the steelwork contractors’ tower cranes. It was found that by this method, not only could full use be made of the cranes but, by co-relating the steelwork erection programme with the floor panel deliveries, economies were made and additional safety given to the welders who always had a floor within normal ladder access.

Littlewoods Department of Architecture and Planning is responsible for the architectural work for this project and Bingham Blades & Partners are the consulting engineers.