New college is lesson in design 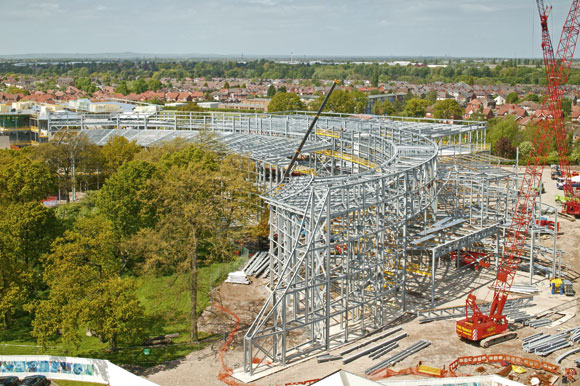 The new building wraps around a protected copse

A confined site and a protected copse were just two of the challenges overcome and then incorporated into the design of a new college in Crewe.

Main client: South Cheshire College
Architect: Jefferson Sheard Architects
Main contractor: BAM Construction
Structural engineer: Scott Wilson
Steelwork contractor: Bone Steel
Steel tonnage: 2,300t
Project value: £77M
South Cheshire College in Crewe is one of the country’s best performing vocational colleges and will be moving into a new and innovative campus in 2010. The project, which began in late 2008, has been designed to prepare the college for the 21st century and create a flagship facility at the heart of the local community to serve generations to come.

The college is currently the sole provider of post-16 education in Crewe and home to more than 11,000 full time and part time students as well as 400 staff. To cope with a growth in demand as student numbers continue to rise, the existing 1960’s campus is being replaced and will be demolished once the new buildings are up and running.

College Principal Dr David Collins is excited by the new campus development which has begun to take shape on land adjacent to the old college buildings. “We want to raise the staying on-rates in Crewe and deliver a purpose-designed college which matches the excellence in provision. Hopefully the new design will inspire our staff and students.”

During the planning process the college identified a series of essential characteristics, including creating a carbon neutral building. Architects for the project, Jefferson Sheard, has implemented this requirement by grouping curriculum areas together and connecting these areas with a lively ‘street-like’ common area. 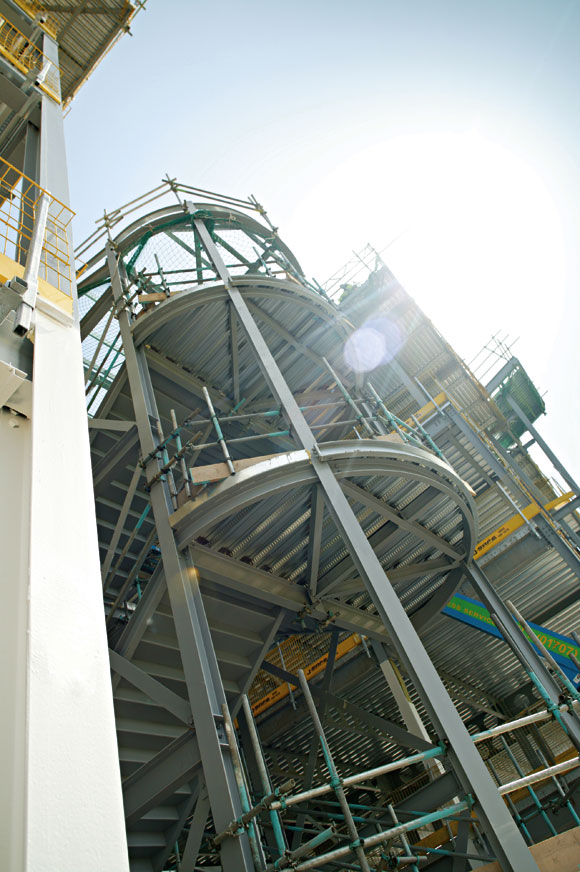 Steelwork will be completed after a 14 week programme 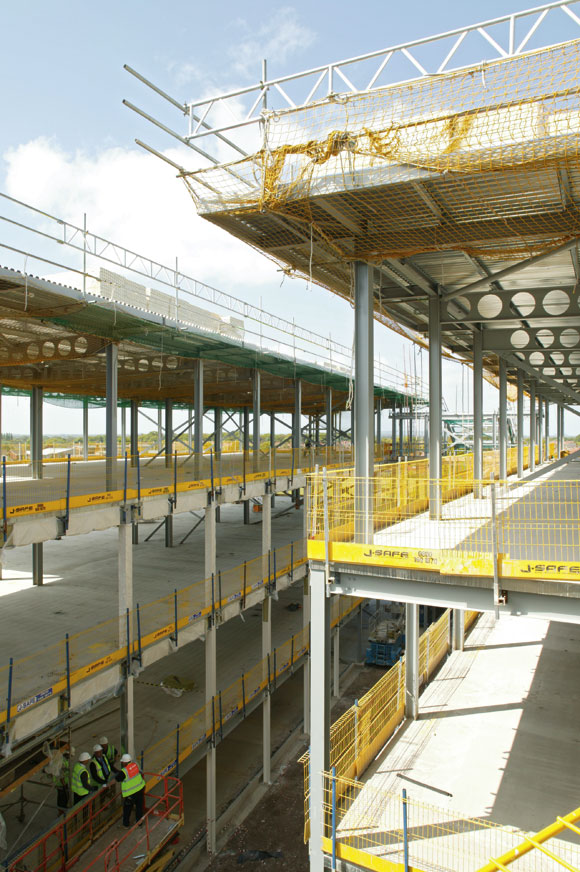 “The design aims to create an open learning environment, with each cluster having its own shop window on to the covered street,” explains Tom Reece Jones, Director at Jefferson Sheard Architects. As well as being a common area the ‘street’ also contains access via balconies to all levels of the connecting clusters.

Covering an area of 8,077m², the new development takes the village street concept a step further by partially wrapping around a copse. The curved street is consequently a single sided affair with clusters of college departments on the outer side and views, beyond a glass partition, of the copse on the inside of the curve.

The copse, which contains trees with preservation orders on them, was and is a distinguishing feature of the site. Right in the middle of the proposed site for new campus, the design of the linking street building has been designed around this copse.

Access to the copse will be via the covered ‘street’ only, and a moat will surround the trees on all other sides.

“We want to protect the trees and limit access to the site to college students and staff,” explains Mr Jones. “Including a moat is a better option than surrounding the copse with a fence or wall.”

The moat will also accept rainwater run-off from areas of the site such as the car park, which will help decrease the college’s impact on the environment.

With a protected copse on one side of the development and residential properties and the existing college on remaining sides, the project has had to deal with a confined site and one which has progressively got smaller as the job has neared completion.

Main contractor BAM Construction started on site in October 2008 with the initial works including the demolition of some college buildings. The majority of material from the demolition process was then re-used for piling mats in preparation for the steelwork programme.

According to Mr Jones the original design was for a hybrid structure comprising both steel and concrete framed elements. However, this was later modified and the only concrete framed part of the project is the library. “The street was changed to a steel-framed structure because steel is quicker to erect,” explains Mr Jones

Approximately 2,300t of steel is being erected for the project by Bone Steel. Its Project Manager Rodger Meldrum says that equates to 7,500 steel members, all of which will be in place after the completion of a 14 week programme.

“The job has gone well and steelwork is on schedule. The most challenging aspect is the confined nature of the site and making deliveries via residential streets. In one week alone we had 21 deliveries to site,” says Mr Meldrum. “As we aren’t allowed to make deliveries before 8.30am or after 5pm, this required a lot of coordination.”

Steel is delivered to site in a ‘just-in-time’ basis and Bone Steel has a forklift which unloads the trucks immediately upon arrival. “This means our cranes don’t have to stop erecting steel to help with deliveries as the forklift has a 10t lifting capacity,” explains Mr Meldrum.

As steel is delivered to site from Bone’s Lanarkshire facility and as there is limited space for material storage on site, all trucks park up outside of Crewe before being given the green light to proceed onwards once the site team are ready.

Bearing in mind the confined nature of the site, Bone Steel started steelwork erection at the furthest end of the site and has worked its way towards the site’s entrance. The initial work consisted of teaching blocks D and E, which both connect into the street at one end, adjacent to the library. Both buildings are stand-alone structures separated from the ‘street’ by an expansion joint.

Blocks D and E are both four-storeys high and of similar rectangular construction. Cellular beams have been used for all floors and this was a design change inspired by Bone Steel.

Teamwork has played an important role throughout the project and Bone Steel says it liaised closely with structural engineer Scott Wilson to drive the early design programme forward. “At our suggestion, and using our steelwork expertise, a few changes to the design have been made, such as using cellular beams instead of lattice girders for better loadings,” says Mr Meldrum.

Bone Steel’s erection programme then moved onto the ‘street’ and block C, which houses a sports hall, workshops as well as classrooms. Some of the largest steel elements have been used on this zone, as the sports hall has 30m clear spans formed by five trusses.

The 5.5m deep trusses were brought to site in four sections and assembled on the ground before being lifted into place. Each truss required a full day to assemble and erect.

The sports hall comprises the central portion of block C, while at one end there are a series of mechanical workshops, which have a double height clearance, and health & beauty classrooms on what is affectively the second floor. Again the workshops require column free open areas and spans of 20m have been achieved with cellular beams.

Once this is completed the final steelwork will be erected in block B, another teaching block, and block A which is a theatre.

The college is scheduled to be completed next year and after an eight week fit-out programme it will open for the autumn term in 2010. “We then begin demolishing the existing college buildings and this land will become a new car park and sports fields,” explains Mark Ferrie, BAM Construction Project Manager.