Lighting up a city centre 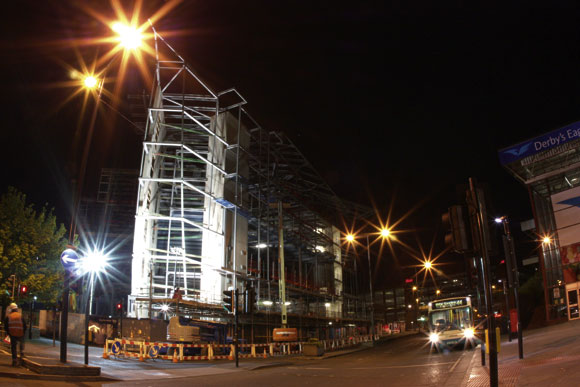 A large multi-use development known as Riverlights is expected to usher in a new era of prosperity for Derby city centre.

Many former industrial towns and cities across the UK have had to reinvent themselves in recent times. As traditional employers have waned new high tech industries have sprung up in their place, changing the cityscape forever.

Derby is a good example, it was once a burgeoning textile centre and then a major railway and engineering hub. Today the local textile industry has completely disappeared, but train manufacturing and engineering continue, albeit on a smaller scale. Today’s major employers in the city are IT companies famous for inventing games such as Tomb Raider, rather than manufacturers of large locomotive engines.

A recent survey discovered that 12 per cent of Derby’s working population is occupied in high technology, making it number one in the country. With further IT job creation in the offing, a number of high profile city centre developments have been mooted to encourage people to spend time and money in Derby. 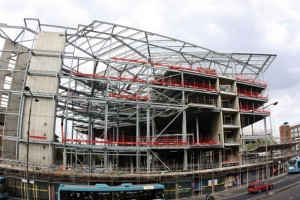 One of these schemes is the Riverlights project which is currently under construction in the heart of the city between the main Westfield shopping centre and the River Derwent. Phase one of this development consists of two hotels, a 3,251m² casino, a retail complex and a bus station, all housed in one six-storey steel-framed structure.

Once complete Riverlights is set to become one of the East Midlands foremost leisure, living and business landmarks and will provide day and night time entertainment. It is envisaged that the new bus station will generate in excess of seven million passengers per year.

The proximity of the river will offer hotel guests good views of the city but main contractor Shepherd Construction says the waterway threw up some challenging aspects. During the groundworks programme old dock walls were discovered which had to be left in place and bridging piles were installed over them. Also, an underground culvert running directly under the site had to be accommodated with sleeved piles with permanent steel liners to avoid any ‘load shedding on the culvert’.

As the structure is multi-use the grid pattern and the required length of the internal spans change on nearly all of the floors. This was one of the main reasons for choosing steel as the main framing material.

“The grids are mostly based around 8m to 10m centres,” explains Derek Mason, Project Director for Capita Bobrowski. “But the first floor casino level and the above hotel floors have slightly different grids with the casino needing slightly longer spans. Transfer beams have been installed were required.”

The layout of the structure is quite complex and incorporates six ground floor retail outlets, each 450m² in size, and then a mezzanine level with further shops and restaurants. The first floor is taken up entirely by the casino, while the second floor, third floor and another mezzanine level house two hotels. One ground floor elevation is occupied by the 24-bay bus terminal’s concourse.

Above the road, in the bus concourse area, a 6m cantilevered triangular roof, measured from the final vertical prop, forms a high level feature, hipped at 6 degrees from the horizontal. This has been designed and formed from slender steel beams, 305 x 305 x 118 sections, with Metsec purlins, for the final cladding to wrap around it as a soffit. 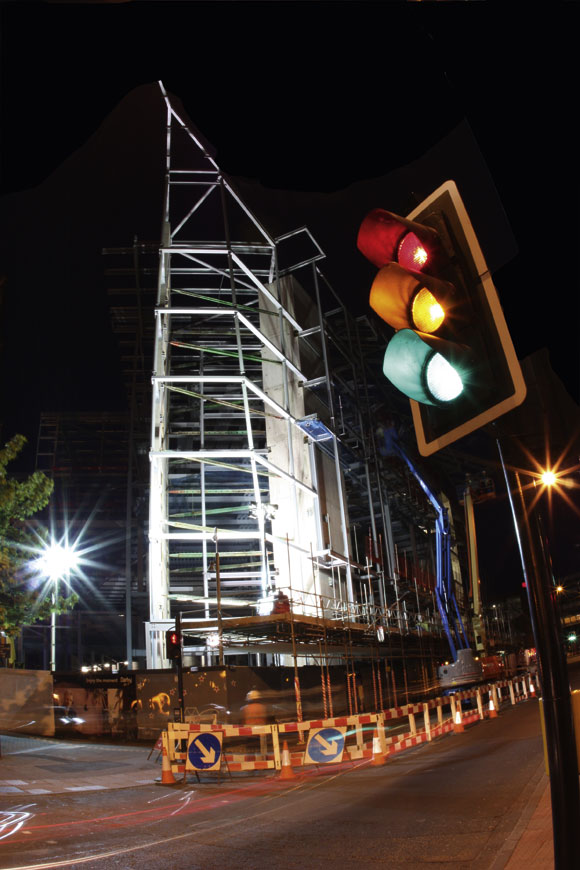 Another eye-catching part of the job is the structure’s main entrance area which features a full height atrium. Completion of the work along this elevation called for six overnight road closures while the high level steelwork, which is 26m above pavement level, was lifted and fitted into position.

The glazed entrance has been designed to draw hotel guests and shoppers to the new building and it is cantilevered 6m from the main structure, using props at 7 degrees from the vertical and hipped at 8.5 degrees.

Steelwork contractor Conder Structures says the saddle connections for the main entrance use 17 through-bolts, 10 on the side, seven on the top, fitted to the top of the adjacent lift core, to connect 356 x 171 x 45 beam and 193 diameter CHS bracing. The company says this complex connection has been designed to resist maximum shearing loadings of 125kN.

The overall structure contains five concrete cores which along with the diaphragm action in the floors, provide the building’s stability. Conder’s in-house design team have incorporated innovative steel to concrete connections that link the in-situ concrete shear walls of the lift shafts and stairs with the steelwork to form the braced structure.

Elsewhere in the structure, on the hotel levels, a similar detailed connection has been designed using eight x 280mm long M20 steel bolts on the lid, and another eight on the side wall. Throughout the building no vertical bracing has been used, which means all steelwork is tied back to the lift shafts and stair cores.

The two hotels located on the upper floor levels consist of a 116-bedroom Hampton by Hilton (an economy Hilton Hotel) and 105-bedroom Holiday Inn. Both hotels have central courtyards and entrances located at ground level, external terraces on the second floor and third floor, as well as meeting rooms and restaurants on the upper mezzanine level.

The project remains on schedule for the bus station to be ready in September and the hotels and casino in early 2010.