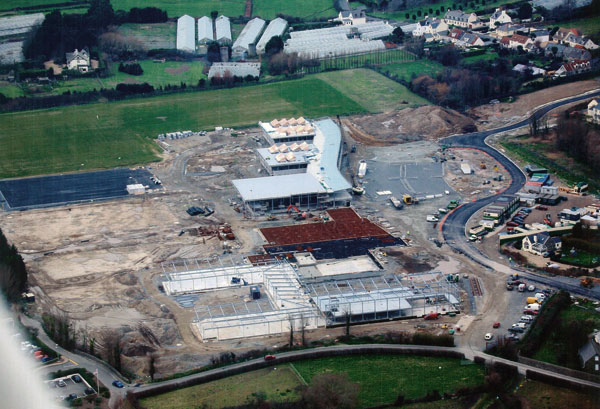 The latest phase in Guernsey’s secondary school redevelopment programme is making full use of steel to cope with a multitude of differing grid patterns.

The largest capital building project ever undertaken by a States Department is currently under way at the former Les Nicolles Vinery site in the north of Guernsey.

The project consists of two new schools to be housed within one large structure, St Sampson’s secondary school and the Le Murier special needs secondary school. Although they have separate identities, both schools will share a central block of facilities, including a swimming pool, assembly hall and social and dining areas.

The mainstream St Sampson’s school will replace an existing establishment of the same name which is overcrowded and suffers from a severe lack of playground areas and parking. Le Murier will take approximately 130 pupils, with learning and physical disabilities, from two other existing schools.

Mike Ashman, Project Manager for structural engineers Gifford, says the main challenge associated with the job was the location. “As with all projects on the Channel Islands, most materials have to be imported from the mainland and this invariably adds cost.”

As soon as Gifford joined the project team, Mr Ashman says it set about trying to reduce costs to make the project, wherever possible, as cost efficient as possible.

“The project was always intended to be a steel framed structure and that was already cost efficient,” he says. “Besides, it would have been very expensive and time-consuming to cope with the amount of different grids with a concrete frame.”

However, it was decided that some substantial savings could be made to sub-structure works. The foundation design was altered to a piled slab as opposed to a long span concrete slab, which resulted in less digging and a requirement for less concrete. 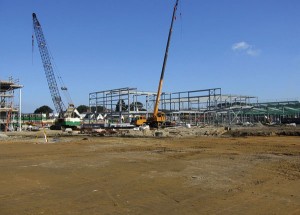 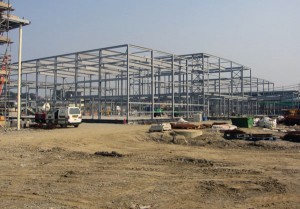 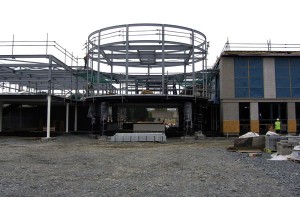 There is only one concrete batching plant on Guernsey, supplying the entire island and so orders need to be placed well in advance. Using less of the material proved to be the best option.

Andrew Fixter, Project Manager for Hambleton Steel, says this was the first job the company had ever undertaken on the Channel Islands and transporting steel to site was logistically challenging.

“After some discussions with the shipping company we got the procedure down to a fine art,” he says. “Most sections were split into 6m-long bundles which fitted the shipping company’s on-board configuration and loading capabilities, while all longer components, such as all columns, had to be laid out separately.”

Hambleton added one week to its usual construction programme to incorporate the cross channel crossing.

Working alongside Hambleton, Gifford also slightly altered the original proposed structural design. “Many of the longer spans were reduced and this saved on tonnage,” Mr Ashman adds.

The building is 240m-long overall and consists of nine inter-connected blocks, which vary in size but are approximately 35m x 35m. Seven of the blocks are two-storey buildings with blocks H and J being the exception with only a single level.

The majority of the steel frame consists of an irregular grid pattern, as all of the blocks are designed for different classroom and office layouts. “We’ve used standard bracing bays throughout the structure, while movement joints are positioned between all separate blocks,” explains Mr Ashman.

Once steel erection was ready to begin, Hambleton split the job into three separate phases with the first started and completed in October 2006.

“The main contractor wanted to have the concrete slab down before we started our work,” explains Mr Fixter. “We had to follow on behind their concreting team and so a couple of breaks in our sequence allowed them to get ahead with the slab.”

Basically completing the ends of the project first, the initial phase of work saw Hambleton erect four blocks – A, C, D and E – all two-storey structures, but all requiring different grid plans. “Nothing difficult, but nevertheless a lot of steel members,” says Mr Fixter.

The second phase involved the erection of the opposite end’s three exterior blocks, G, J and H. Although two of these units are only single storey, each block again has a different grid to suit individual classroom needs.

The third and final phase, which was completed this spring, saw Hambleton fill in the central zone of the school by erecting block F which contains a swimming pool and sports hall, and block B, which is the main entrance hall.

Commenting on the grid complexity, Mr Fixter says that to match the differing patterns a number of column sizes were used, and even some 200mm x 100mm box sections in block C. However, the only building with long-spans was block F which required 19m spans over the swimming pool and sports hall.

Block F is a rectangular building measuring approximately 60m x 45m with a two-level classroom and changing room area in the middle. Either side of this, the swimming pool and sports hall areas are both double floor height.

Column sections were made from two 610 x 229 x 101 beams which were spliced on the ground, erected as one 2t piece and placed at 4.2m centres. “All of the steel erection went to schedule although we did have to make sure all sections were kept within the available crane capacity,” says Mr Fixter.

There are not many mobile cranes larger than 25t capacity available on Guernsey, so to avoid bringing a machine over from the mainland – which would have been a costly exercise – all steel erecting was pre-planned around crane availability and positioning.

Hambleton was not allowed to run mobile cranes on the recently cast concrete deck, so all craneage and lifting had to be planned around the building’s footprint. “This wasn’t a real problem, as we weren’t lifting anything really heavy, it just required some pre-planning on our part. By the time we were erecting the largest pieces of steel over the swimming pool we had perfected our positioning,” sums up Mr Fixter.

Construction work at the new schools building is scheduled for completion by August 2008, and pupils will begin using the facilities after Easter 2009.