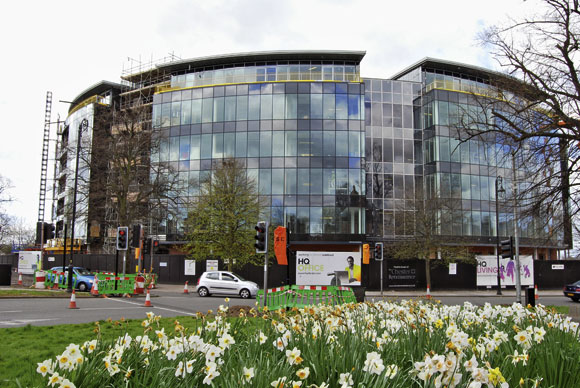 Offering views of the nearby racecourse and the River Dee, the Head-Quarters in Chester is a steel-framed structure comprising hotel, offices and residential apartments.

The historic city of Chester is not necessarily associated with modern landmark multi use structures, but that is about to change as a key development inside the city walls nears completion. Known as the Head-Quarters building, as the site was formerly occupied by the Cheshire County Constabulary, this mixed use scheme will include offices, restaurants, a hotel and residential apartments.

Head-Quarters is located at one of the recognised gateways to Chester, overlooking the famous Roodee Racecourse and the River Dee. Project developer Liberty Properties says it will be one of the most impressive commercial and residential developments created outside of London in recent years.

Structurally the building is also impressive to look at as it is circular in plan – 80m in diameter – with a pedestrian thoroughfare neatly dividing it into two equal halves. One half of the building will provide approximately 5,000m² of office accommodation, while the other is divided equally between 35 luxury apartments and an Abode Boutique Hotel including a Michael Caines signature restaurant.

At ground level there will be a combination of retail outlets and restaurants centred around a central piazza. Below this open public space, covering the full diameter of the structure’s footprint –  the development consists of two levels of car parking and plant rooms.

As the site is on a slope the two below piazza levels are only partially underground. These lower levels of the project are formed with concrete, but from piazza level upwards the structure is entirely steel framed. Interestingly, Richard Bartley, Project Manager for main contractor Pochin Construction says initially the whole building was designed in concrete. 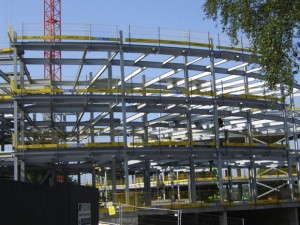 A steel frame was chosen for its speed of construction

“Once Pochin came on board our team changed the design to steel for cost and speed of construction,” he says.

As steel generally lends itself to a faster construction programme this design was settled on and Robinson Construction, whose steel design it was, got to work fabricating, supplying and then erecting the project’s 1,000t of structural steelwork.

As the steel-framed building is split into halves, they are both independent structures, says Gary Brealey, Design Director for Robinson Construction. “Apart from a few minor beams connecting the halves at two gateways, they’re structurally independent and individually braced.”

Although curved in plan, the majority of the steel members are in fact straight, with the exception of the perimeter beams supporting the edge of the slab and the curtain walling. The steelwork is set out on radial grids, which are all slightly different, depending on the area. For instance, the hotel required slightly longer spans than the office and residential zone, although all spans are in or around 8m long.

Each part of the building also presented the design team with different loadings and structural zones depending on the final use. The hotel required 305 beam sections due to the smaller floor to floor level, while higher anticipated loadings and greater storey height  for the office block meant 457 sections were used here.

The steel floor and main beams are generally simply supported acting compositely with a metal deck and concrete floor. Roof beams, however, supporting the purlins are all non-composite. Columns are all spliced above the third floor level and stability is provided by the diaphragm action of the composite floors and roof bracing girders spanning between vertical bracing panels.

“We’ve placed bracing in the main lift and stair cores, while the gable ends also provided an area with less windows so there is bracing there also,” says Mr Brealey. “The joint between the hotel and residential zone also provided an ideal area to place bracing.”

Work started on site in May 2007 and the project is scheduled for completion this August. Prior to Pochin beginning its groundworks programme the old Police headquarters had already been demolished. Early works included the construction of a retaining wall – as the site sits on a slope – and the installation of CFA piles. 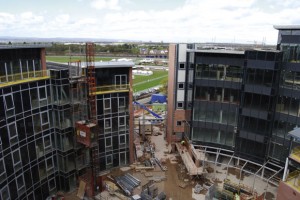 The circular building occupies a site adjacent to Chester racecourse

Chester was originally a Roman settlement and the Head-Quarters site has at one time or another been occupied by a nunnery, army barracks and further back a Roman villa. Once groundworks began it was no great surprise that a number of archaeological finds were unearthed.  A team of local archaeologists were permitted to start diggings on the site and their discoveries included more than 100 skeletons dating back to the Middle Ages.

“Early on in our programme we had to sequence our work around the archaeological digs,” adds Mr Bartley. “Despite this interfering with our work, we remained close to the overall schedule by resequencing the works with the help of our supply chain.”

Once the foundations and the historical diggings had been completed, the concrete lower levels were then cast, allowing the steelwork erection to begin. Using one centrally located tower crane, the residential section of the structure was the first part of the job to be erected.

“The apartments will have their own fit-out so they needed to be up and ready first,” explains Mr Bartley. The office was then erected, followed by the hotel.

Sequencing was also a key consideration during the steelwork erection programme. Once one sector, or quarter of the circular structure, had been erected Robinson then installed the metal decking, allowing the concrete floors to be poured. Because of the building’s circular shape fibre reinforced concrete was used instead of traditional rebar. This meant no time-consuming cutting of steel rods, as the majority would have been different lengths.

The upper levels of the building also feature a mix of four, five and six levels. The residential section rises to four and five floors, with six apartments per level with the uppermost floors occupied by penthouses. Meanwhile, the hotel has six floors, and the office accommodation has five floors.

The structure’s roof is split into several segments and consists of an insulated roofing system, clad in zinc, that spans between cold rolled steel purlins at a three degree pitch. There are several flat roof areas between the pitched areas and these have insitu concrete on a metal deck.

Completing the Head-Quarters, the external envelope of the residential quarter will be finished in stone cladding, with glazed curtain walling to the hotel and offices. Liberty Properties says this will lend the project a contemporary interpretation of the surrounding historic elements of Chester. 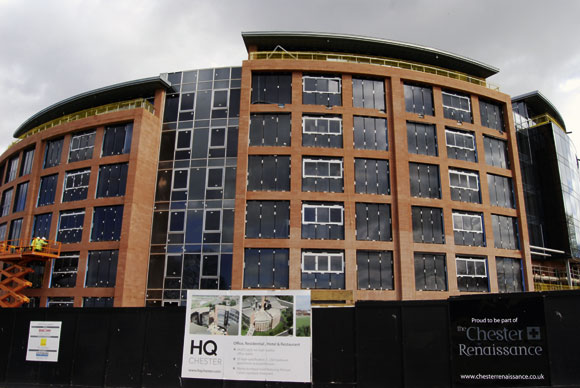