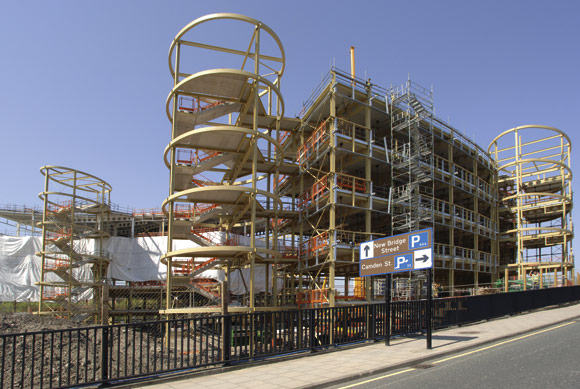 An old Newcastle cinema site is the location for a major campus expansion by the University of Northumbria. Steel construction plays a starring role in the production, as Martin Cooper reports.

One of the North East’s premier seats of learning – Northumbria University – is investing more than £100M in a major expansion and refurbishment programme. Part of this grand scheme involves the construction of a new two-building campus, situated on the site of a former cinema and separated from the existing City campus by the A167(M) motorway.

The new East campus will comprise of an 8,000m² School of Design and a 16,000m² building which will house the School of Law and the Newcastle Business School. The project’s masterplan also includes the construction of a pedestrian bridge linking the two sites to create a single, integrated city centre campus.

The site was once occupied by the Warner Cinema, and before that by a goods station. Stephen Jasper, Project Manager for structural engineer WSP explains the nature of the previous tenants meant one of the job’s main challenges was the amount of preparatory works.

“Before the foundations for the new buildings went in a vast array of old 7m-long foundations had to be extracted,” Mr Jasper says.

Once the site had been cleared and foundations for the new steel-framed structures were in place, steelwork began to be erected early this year.

Mr Jasper says during the planning stages a steel-framed design was chosen because both buildings required an open-plan configuration.

“We wanted as few internal columns as possible, so long beams are used to give us the required spans,” Mr Jasper says. “We looked at other materials, but they wouldn’t have been viable.” 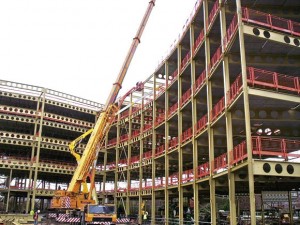 Westok beams are used throughout 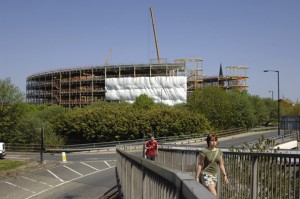 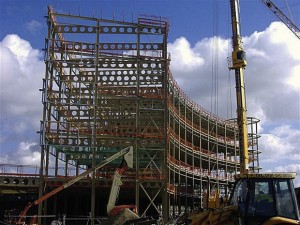 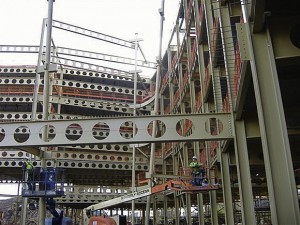 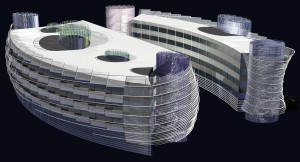 Solar repellent glazing will be used as cladding

Another aspect in steel’s favour was the fact that the building’s original design had to be lowered by approximately 4m. This was to keep the structures in line with surrounding buildings, but this slight architectural alteration meant it was crucial the services be integrated into the floor-ceiling cavities. “Westok beams were the obvious choice as they already have the service holes in them,” Mr Jasper adds.

“As you can imagine, as the buildings house university faculties, there is an array of IT cables as well as the usual services,” Mr Jasper says.

Both new structures consist of five-storeys and are steel-framed beam and column units. Columns are typically 305UC section, while the Westok beams are generally 900mm deep and 14.5m long.

The larger law and business school building is an eliptically-shaped structure with a 45m width at the middle and an overall length of approximately 100m. Because of this width a completely column-free design was not possible. However, by utilising 14.5m-long beams, Mr Jasper says there are two sets of internal columns where there would normally be five sets. Consequently, a grid plan of 14m x 6m features in the building throughout its five levels.

The building also has, on its ground level, a two-storey high (9m) entrance lobby and cafe. A central lightwell which extends up from ground floor to roof level is another distinctive aspect, which was formed with curved steel sections.

Sue Capewell, Project Manager for Billington Structures says the lightwell utilised 400 x 200 RHS’s that were fabricated off site and bolted together on site.

Meanwhile, the smaller School of Design building does have a completely column-free floorplan. “We were able to achieve the desired open-plan design because this building is only 14m wide,” Mr Jasper explains.

Utilising a grid plan of 14m x 6m and 14.5m-long x 900mm deep main beams, the entire building has no internal columns throughout its five levels.

This narrow structure sits opposite its larger neighbour and abuts a retaining wall which runs along the project’s northern boundary. Because of this wall, the building’s ground level cannot be accessed from one elevation, as it’s effectively underground.

The ground level will eventually house the faculties’ workshops and minimal use of internal columns was a key requirement of the University.

Architecturally, both of the new University buildings will have glass facades wrapped in stainless steel mesh panels that reduce solar gain by up to 50%, preventing occupants from over heating. This double skin construction also allowed the designers to incorporate walkways and handrails for maintenance workers.

Part of Billington Structures’ contract included the supply and erection of bowstring trusses which will support the glass and stainless steel facades. Ms Capewell explains that a series of 26m-long external bowstrings will be erected around both buildings to support cladding. “Behind the trusses there are braced steel walkways which we also supplied,” she adds.

Both buildings also feature two steel-framed staircase cores at either end. These staircases were erected with curved sections and bolted together on site. These external staircases will have glass cladding that incorporates 100mm-diameter aluminium tubes which double as safety handrails and solar shading for users.

According to Natalie Sarabia of architects Atkins, a lot of work has gone into designing the external steelwork and its associated cladding. “We wanted to minimise the amount of sunlight which would penetrate the facade, so solar repellent glass will be used on the main elevations as well as the external staircases.”

Once the project is complete, much of the old University campus will be refurbished. The University says this is its largest ever investment programme and will make a significant contribution to Tyneside’s future growth and regeneration.