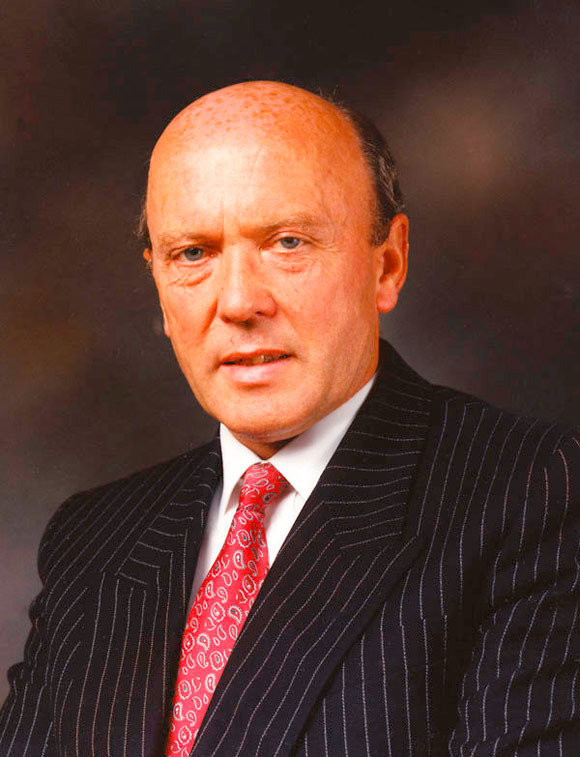 Metals run through the blood of Joe Locke who ‘retired’ from the steelwork industry last December. Ty Byrd reports.

Joe Locke, who retired at the end of 2004, had retired once before, from the position of Chief Executive Officer of Watson Steel. That was in 1998 when, in accordance with company policy, he cleared his desk aged 60. The man moved straight to William Hare to be responsible for the engineering aspects of that company’s activities plus executive director of subsidiary Westbury Tubular Structures.

What was a seamless transition reflected Joe Locke’s status as an elder statesman of the industry, a constructional steelwork engineer of outstanding ability. At Hare he maintained his reputation for exciting structures and adventurous projects. But after six years – having reached 66 and received more than enough accolades from his peers – he decided to retire for real this time. Or did he?

“Well, I’ve had enough of five and six days a week working and am keen to shed the rigours of 9 to 5,” he says. “That said, I am not yet ready to dig the garden full time either.” So, a spot of consultancy perhaps? It is on the cards, he says, “although there are no firm plans as yet”. What is certain is that the industry will not wish to lose his knowledge and experience.

Take a look at some of the aforementioned accolades. In 1990 he was awarded an MBE for his contributions to the structural steelwork industry. He was elected to the Royal Academy of Engineering six years later. In 2003 he was presented with the European Medal of the European Convention for Constructional Steel (ECCS) for services to European steelwork.

He has been President of the British Constructional Steelwork Association (between 1988 and 1990, when – among other things – he was prime mover behind the association’s astute purchase of its own offices) and of the ECCS (in 1998–99). Five years ago he was appointed Visiting Professor at UMIST, the University of Manchester Institute of Science & Technology. It all amounts to a great deal of respect for his work with steel. Tap Joe Locke’s veins and metals flow.

He was born in Bolton, described by him as the ultimate structural steelwork town in its day, the first place in England to have a Bessemer converter. His grandfather had been a blast furnace man, his father an iron moulder. Becoming an indentured apprentice with Watson at 17 was a natural move for him with five good years of theoretical and practical training to follow, in the workshops, template board, drawing office and on site. The apprenticeship was good. “It prepared you to become a chartered engineer but also provided the people skills that employers wanted,” he says now.

He sat his associate membership of the Institution of Structural Engineers at 23, not only passing two years before the minimum age for being chartered, but receiving the institution’s Wallace Premium for the highest marks in the Theory of Structures paper.

Joe was subsequently moved by Watson to its Bristol factory where he became chief designer. “The role did not sit comfortably – I was young, the job was demanding and I always felt I had things to prove. I worked too hard at this time.”  He turned to academia for several years, firstly to the Bolton Institute of Higher Education as a lecturer in the theory and design of structures, later joining UMIST as a research assistant. 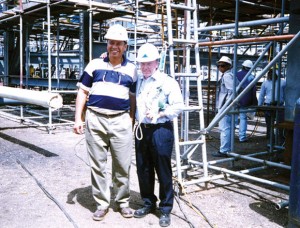 On site in the Philippines

“This was a fantastic period of my life. I particularly appreciated the UMIST attitude where, however massive the problem encountered, someone would say ‘Well, that’s easy, isn’t it?’ This way of thinking eventually became natural,” he says. He got his Masters at UMIST, with a thesis entitled ‘The flexural torsional buckling of I-section columns with a restrained access of rotation’. “Catchy, isn’t it?”  At UMIST he was very happy but poor as well. “Also I wanted to get back to doing real work.”

Real work meant a return to Watson and putting to use the programming skills he had developed on UMIST’s ATLAS autocode computer, writing large suites of software for the design and optimisation of steel structures. This was the early 1970s, real trail blazing days in computation. “I learned my computing from first principles, unlike many designers today,” he says. (If Joe Locke has a real beef about current design practice, it is the blind reliance on design software and the lack of knowledge about its limitations.)

“At this time, mainstream structural steelwork was a highly competitive market, so I drove the business into areas out of the mainstream. We looked hard for heavy engineering works, complex structures of high added value, and where there was no market price. The policy brought us some amazing and profitable contracts.”

“All through I remained hands on, maintaining  my affinity for engineering and design. I walked the shops, the drawing offices, every day. I visited the sites. I’ve had a tremendously interesting working life and seen the industry change incredibly, principally because of CNC, computer numerical control, making possible increasingly complex shapes.”

He sees design becoming more complex in the years ahead, driven by European standards, possibly not for the best of reasons. “My call has always been ‘simple codes sell steel’,” he says. The Europeans notwithstanding, the UK industry is in good shape. “It has been a privilege to serve it and maybe I’ll maintain an interest…”