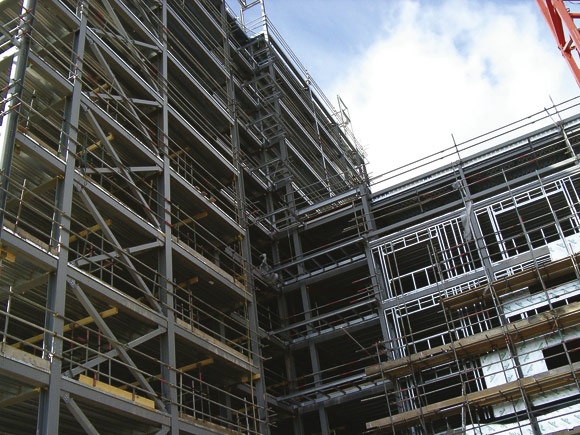 Conventional wisdom has it that the market for high-rise buildings falls neatly into two categories: for commercial buildings steel is by far the preferred material, but high-rise residential blocks are seen as the domain of reinforced concrete. Not any longer.

The conventional view is fast being overturned, as steel makes growing inroads into the multi-storey residential market. Independent market statistics now suggest that steel frames have overtaken concrete as the preferred solution for residential buildings of five storeys and over.

A graphic practical demonstration of the new trend is currently to be found in a prime residential development overlooking Cardiff Bay. The Lighthouse, which forms part of Bellway Homes’ Prospect Place development, was originally conceived as a reinforced concrete structure and had gained planning approval, but is being built as a steel frame.

The preference for concrete in the residential sector stems from perceptions of shortcomings in steel’s performance in sound and vibration transmission and the need for additional fire protection. But engineers and architects are satisfied that these issues have now been resolved. 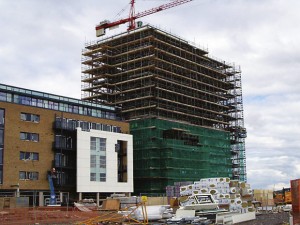 Design changed from reinforced concrete to steel for speed, cost and because of more competitive market in steel 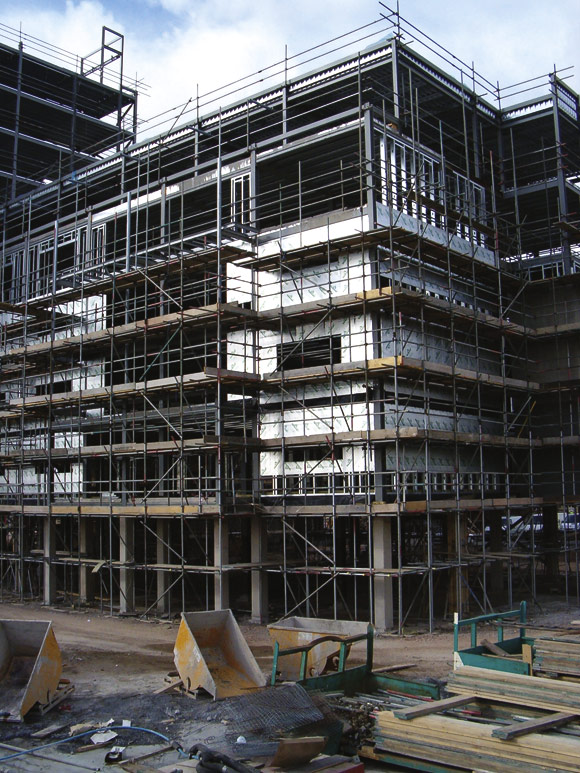 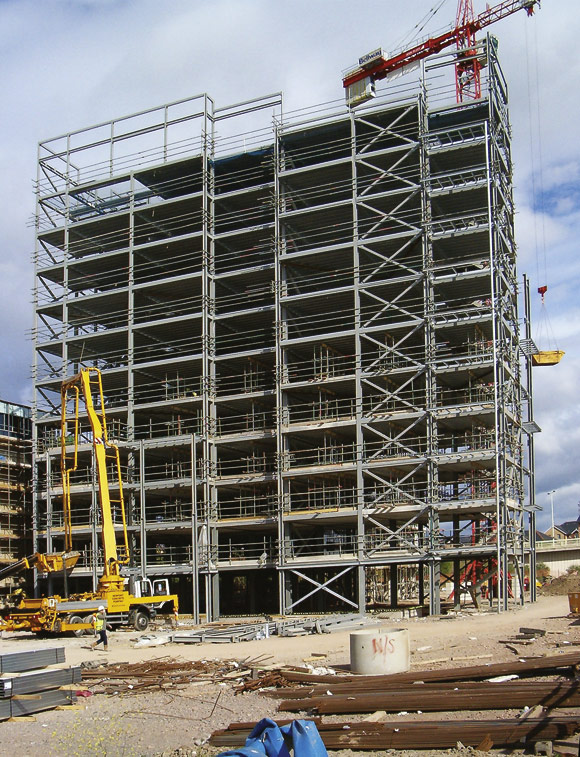 Steel frame erection completed a week ahead of schedule 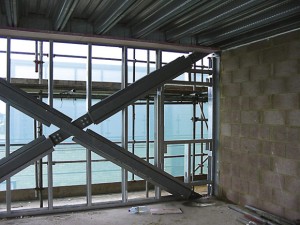 Hollow section bracing members as seen from inside before wall construction

Moreover, steel can match the structural depth of a reinforced concrete flat slab floor, important because this affects overall height and therefore has implications for planning approval and on the cost of the external envelope.

A recent cost study on behalf of the Steel Construction Institute by Davis Langdon showed there was no financial penalty associated with steel when compared to concrete alternatives. Davis Langdon calculated the cost of a notional multi-storey block in reinforced concrete and in steel with three different floor systems. It found that the difference between the highest and lowest was only £10/m², or about 1%, even after recent price rises. “The structural frame only accounts for 14% of the total project cost,” says Davis Langdon cost research associate Peter Fordham. “Quality of specification, especially of the facade, ceiling height, and bathroom provision all have a greater effect on cost than the structural system.”

The Prospect Place building, known on site as Block L, has a main block of 12 storeys and a six-storey wing. It  will comprise 20 studios, 24 one-bedroom and 58 two-bedroom apartments and four penthouses. And buyers in the market for urban waterfront apartments are unlikely to be tolerant of any deficiencies in sound insulation.

Bellway wanted to change to steel due to cost and to take advantage of a wider South Wales contractor base in steel. There were also problems sourcing the necessary skilled labour for concrete. Bellway project manager Paul Minnis says: “There wasn’t much of a market in concrete, with one contractor always the cheapest. For steel there was a bigger contractor base, better competition on price and more choice.”

Changing materials posed no particular problems from the structural point of view. Project engineer Marcus Tulloch of structural engineer Bingham Hall O’Hanlon says: “For planning approval the height had been specified on the basis of a 475mm floor depth, so we had to meet the same criterion using steel.”

Using the Slimdek system, in which a troughed steel former supported on the extended lower flange of a 280mm deep asymmetric steel beam acts compositely with an in-situ concrete floor, a depth of 325mm excluding the suspended ceiling was achieved.

The steel beams span 7.5m. Only one row of internal columns, which could be accommodated within the internal walls, was needed. Balconies are supported by a separate tubular steel structure but were installed as part of the main steelwork contract.

Minnis admits to early reservations about the change, but is happy these were overcome. “I was worried about sound transmission in steel being potentially a big disadvantage. But our technical division felt the sound transference could be managed out.”

Senior architectural technician Nick Jackson of BMG Architects says: “We tend to use reinforced concrete in residential buildings, but we had done a multi-storey residential block in steel, Sophia Mansions at Penarth Marina, before. So we were quite comfortable with moving to a steel frame and we were familiar with Slimdek.”

He adds: “Detailing in steel requires a lot more care about the transmission of sound and you need to be very vigilant on site. But mainly it’s a discipline for us upfront to make sure details are in place.”

The principles, he says, are using resilient joints, filling voids, and isolating the room surfaces from the steel frame.

For example, expanded foam is inserted between columns and internal walls. Brickwork ties for the external cladding are shot-fired to the column flange with a neoprene washer between the two to prevent sound transmission. Mastic is used between the steel frames and the lightweight metal sections used to support the internal cladding, to prevent metal-to-metal contact. Insulation quilt is placed within the webs of the columns before they are enclosed by plasterboard. The suspended ceiling hangers are supported from plywood boards, rather than directly from the steel frame, to attenuate sound, and an insulation quilt within the ceiling void prevents boom.

Mr Jackson admits: “You do need control on site to make sure all the sealing is done. Site supervision wasn’t our responsibility, but we kept reinforcing the point when we visited site and we have confidence in the site team.”

That this confidence was well-founded was demonstrated when the building comfortably passed acoustic tests to demonstrate Building Regulations compliance towards the end of last year.

Bellway project manager Steve Northam praises the efficiency of steelwork subcontractor Bison Structures. “We worked with Bison and found we could control delivery to site so that we knew exactly the day and time of delivery. Steel arrived virtually on a just-in-time basis and erection was very clean and efficient. They finished ahead of programme.”

The Slimdek floors required no formwork and had no lead-in time. The concrete for each floor was generally placed in a single day. In fact the only problem, Northam says, was that the frame went up so quickly that follow-on work was not up to speed and orders had to be implemented rapidly to keep up.

“We used the unusual approach of building the floors as we went up rather than later, which was definitely the quickest solution. The only practical problem was getting access. Our cherry pickers had to be set outside the decking erectors’, so for the upper floors we needed 40m cherry pickers, the biggest in the country, which we had to book three months in advance.”

Construction was further speeded up by using a lightweight, dry system for internal and external walls, with 150mm Metsec channels supporting internal plasterboard. External cladding is either brickwork supported by stainless steel angles on the edge beams or insulating render attached to  the lightweight walling. This meant lower loads compared with building blockwork walls and eliminated wet trades. Structural hollow section bracing 150mm square is fitted within the wall thickness.

“It screwed together very quickly and effectively,” says BMG’s Nick Jackson. “I can see us doing it again.”

Having pulled out the stops to complete the lift-shaft, Bellway has now handed over the six-storey block to the NHBC. The first occupants will be moving in shortly.

“The building is being occupied early,” says Mr Jackson. “They wouldn’t have been able to do anything like that if they’d had to cast the whole thing.”

Meanwhile, Bison is about to start work on a 158-unit residential scheme for Bellway   at the SA1 development in Swansea Docks. Bison’s Mark Fox says: “It’s a growing trend, Over 50% of my work in the last year has been residential and many of our other project managers are doing residential developments non-stop.”