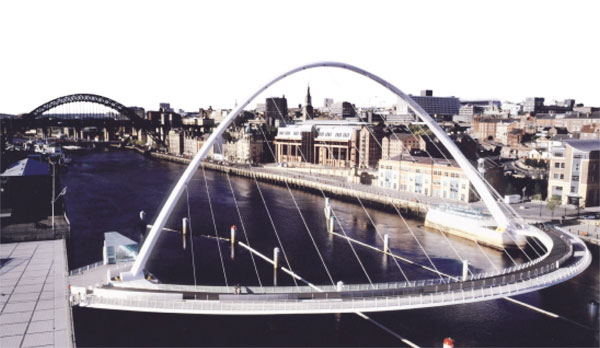 The Wilkinson Eyre Architects and Gifford design is the winning entry to a 1997 competition for a major new crossing over the River Tyne. The £22m project, promoted by Gateshead Council and part-funded by the National Lottery, links the newly developed Newcastle Quayside with the ambitious plans for redevelopment of East Gateshead, in particular the new visual Arts Centre at the Baltic Flour Mills and the Northern Regional Music Centre.

The brief was dominated by the requirement to retain a 30m-wide clear channel for shipping whilst maintaining a low-level crossing for pedestrians and cyclists, as well as addressing the importance of context in this place characterised by its bridges. The opening motion of the design is both its generator and its highlight. Bridges that open offer a spectacle, yet are rarely spectacular. This bridge in contrast has visual daring and elegance in its closed position, giving way to theatre and power in operation. 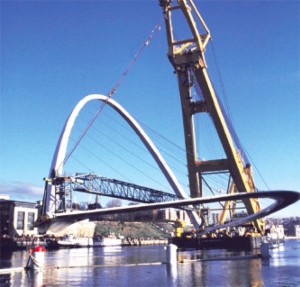 The idea is simple; a pair of arches, one forming the deck, the other supporting it, pivot around their common springing point to allow shipping to pass beneath. The motion is efficient and rational, yet dramatic beyond the capabilities of previously explored opening mechanisms. Two synchronised batteries of three hydraulic rams located in each end support provide motive power to the base of the arch, 4.5m below the bearing centreline. The whole bridge tilts, and as it does the entire composition undergoes a metamorphosis into a ‘grand arch’ of great width and grace, in an operation which evokes the action of a closed eye slowly opening.

The scheme is wholly informed by the need for a legible integration with the Tyne’s existing bridges and with its particular context. The design is a mix of the robust combined with an overall lightness to contrast the visual mass of the Baltic Flour Mill. The soaring 45m-high arch provides instant visual reference to the Tyne Bridge beyond, but presents a slender profile against the skyline, interpreting and updating the structural and aesthetic order of its neighbour. 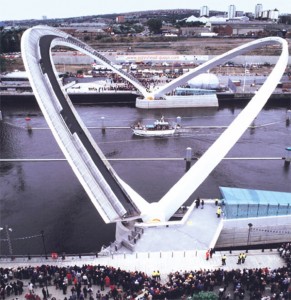 The bridge spans 105m between new concrete end supports founded in the river and lying parallel to the quay sides. Access to these caissons offers exciting additions to the functions of the bridge, allowing a simple glazed hall on each to provide amenities in a highly dramatic location with incredible views of the structure and the Tyne.

The bridge between the two caissons features two parallel decks separated by level and by intermittent perforated stainless steel screening to differentiate pedestrian and cycle paths. Pedestrians are allowed clear views over the lower cycle deck, and seating and other amenities promote the bridge as a place in its own right as well as a crossing.

The parabolic arch comprises a kite-shaped cross section tapering in both plan and elevation, fabricated from internally-stiffened steel plate up to 35mm thick. The main pedestrian deck is a similarly fabricated steel box, parabolic in plan and narrowing from the quaysides towards the centre of the river. Spiral strand stay cables link arch and deck sections, with carefully detailed anchorage lugs on the arch and recessed cylindrical anchorages within the deck. The lower cycle deck features a lightweight opengrille aluminium surfacing supported from the main deck on cantilevered arms. 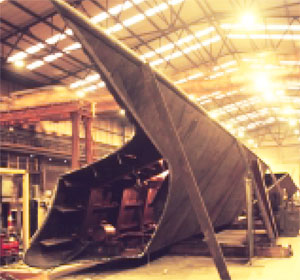 The complex steel superstructure was fabricated at Watson Steel in Bolton and transported in sections to the AMEC works at Hadrian Road, Wallsend where arch and deck pieces were welded together and painted, lying flat, before being raised and joined. The entire superstructure was transported the six miles to its final position in Gateshead in November 2000 using the giant Asian Hercules II floating shearleg crane, and successfully lowered into position to a tolerance of ±2mm.

An NEC Target Cost Contract with Bill of Quantities was adopted, with Harbour & General/Volker Stevin appointed Main Contractor and Watson Steel and Kvaerner Markham subcontractors for steelwork and M, E and H respectively.

Gateshead Millennium Bridge is conceived as being in the great tradition of engineering in Tyneside and represents the revitalisation of the Gateshead riverfront. The unique, challenging design has been transformed into a functional, beautiful and iconic new landmark for Gateshead and the north-east, and has proved highly popular since its public opening in September 2001.

A fundamentally simple concept which exactly matches the complex requirements of the brief has been implemented with great assurance and elegance to produce a very fine bridge for pedestrians and cyclists. It can take its place confidently alongside the great bridges crossing the Tyne built by earlier generations.