The new Tattersall Stand at Newbury Racecourse in Berkshire provides upgraded betting, viewing and catering facilities whilst also offering a new venue for exhibitions and conferences during non-race days.

The structural form was driven by the architect’s intent for a clear, bold, expressive X-frame. Primarily this differs from conventional stadium design in that the roof was not designed to cantilever forward but rather to be propped by the primary structure at its tip. The geometry of the X-frame was developed to provide efficiency within the structure whilst satisfying the client’s brief for clear floor plates. By ensuring that the horizontal, vertical and diagonal elements of the frame connected at discrete node points, forces were resolved into axial loads thus minimising bending stresses. 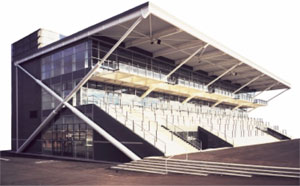 The structure consists of six X-frames spanning 36m on a 12m grid with service cores attached to the back. Steppings, to the front, rise to a bar level at the central node point of the X, above which is a restaurant level with projecting balconies. The client required that the old stand be demolished and the new stand be in place between the dates of the annual November Hennessy Gold Cup race meetings. With under a year to construct the stadium the design and fabrication maximised off site fabrication in order to deliver a ‘kit of parts’ that could be readily assembled on site.

Structural stability is inherent in the plane of the X-frames, whilst bracing within the cores provides stability to imposed lateral loads in the orthogonal direction. Within the mechanism of the X-frame, vertical ties resolved the structure from out of balance loading thus preventing the central node point acting as a fulcrum about which the upper structure could pivot. A horizontal tie between the feet of the X-frame ensured that the structure resolved itself into a discrete element whereby only vertical and applied lateral wind loads are transmitted to the piled foundations. 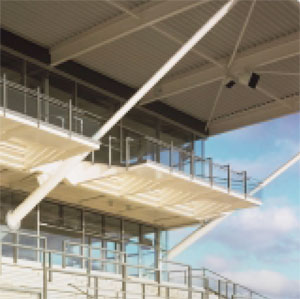 An assessment of the sensitivity of the steel frame to dynamic loading was carried out using a finite element model. Due to the angle of rake, the primary X-frame elements do not behave like simple columns but have a complex beam-column characteristic in which the structure has a tendency to combine vertical deformation with sway. The analysis studied the global type mode shapes and the largest conceivable energy input of a capacity crowd jumping in time.

The relatively short spans and large number of openings in the service cores favoured a concrete filled metal decking that could be simply trimmed to suit the irregular floor plate. The bar and restaurant clear floor plates were constructed using pre-cast concrete planks with a structural topping spanning 6m.

To meet the architect’s specification for a high finish to the concrete steppings the units were fabricated off site and sequenced in delivery to be lifted straight into position so as to minimise handling and the possibility of damage.

This grandstand has a transparently open feel that displays the primary “X-frame” structural form to its best advantage. It is clearly a winner with the client, fulfilling the project brief by providing excellent usable space and sight lines throughout. The designers are to be congratulated on a splendid team effort.