Irish eyes are smiling at the beauty of steel 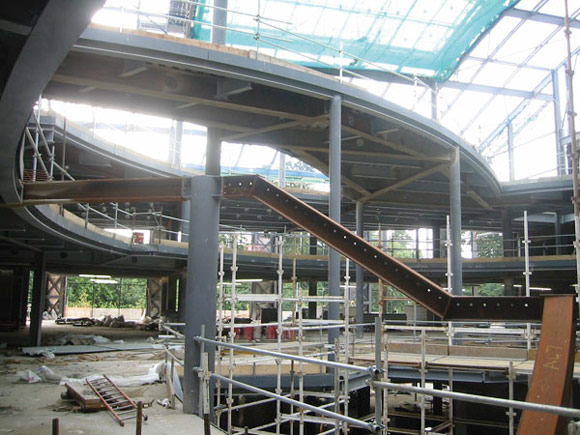 Late design changes have knocked many a construction project off course, but the way a significant change was handled at the Dundrum shopping centre development in the Dublin suburbs shows steel at its best.

With just five months to go before the shops were due to open and with the majority of the scheme’s 27,000t of steelwork and 167,000m² of metal decking in place, steelwork contractor Fisher Engineering Limited (FEL) was asked to add more. No problem. The ‘Monsoon Change’ – named after the retail brand closest to the particular area of the structure – was successfully undertaken and the project stayed on course.

Dundrum is an impressive development with high quality finishes and structural features including two large open atrium areas. The car park alone is outstanding – built in steel, ventilated and designed to be light and secure. Coloured ceiling lights mark out available spaces and number plate recognition technology tells visitors where they left their cars.

Main contractor John Sisk & Son started construction work in October 2000 with a massive excavation. Planning pressure on height had made developer Crossridge Investments go downwards instead, around 15m below surrounding street level, to build the shopping centre in a large hole.

“Structural steelwork was chosen for the superstructure early on and we were brought in early to discuss how to build it,” says FEL Managing Director Ernie Fisher. “Steel was chosen because it met the need for rapid construction and also because it provided adaptability for a design likely to evolve as retailers bought space.” 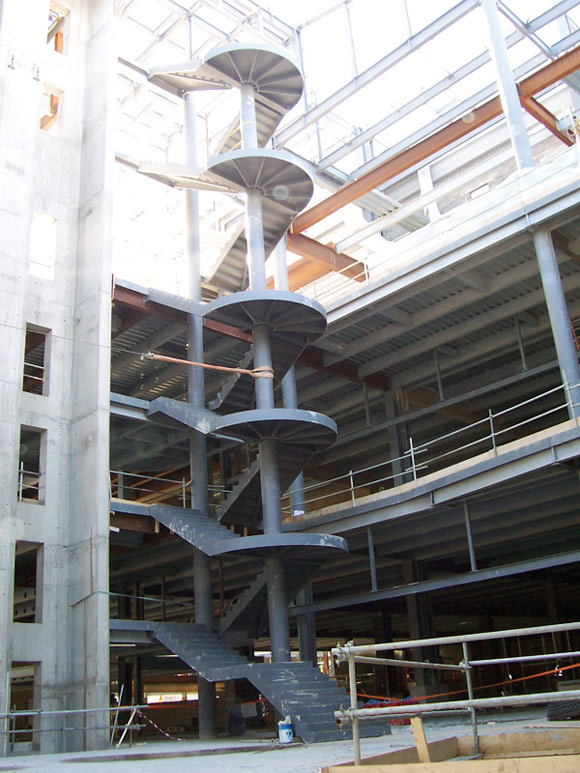 Sisk requested the Area G/H staircase be changed to steel. FEL erected it in three days

The Dundrum development was divided into areas and satellite buildings 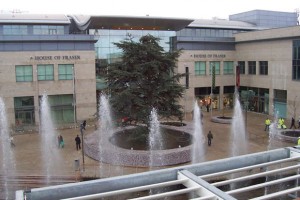 Dundrum is a prestige shopping development, attracting names such as House of Fraser 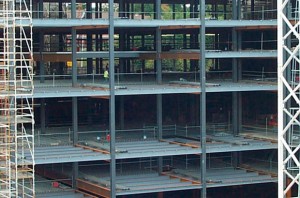 By September 2002, structural engineer TJ O’Connor & Associates had completed the outline design and FEL was starting erection of principal steelwork.

“The developer had been keen to squeeze in as much retail space as possible within the height restraint which put pressure on the depth of structural floor zones, necessitating heavy plate sections and girder work,” Fisher says. “As construction got going, the scheme was selling so well it seemed everybody wanted to get in. This meant additional mezzanine floors which run the entire length of some areas of the building.”

Responsibility for design of secondary steelwork had been handed to FEL. This turned out to be a good decision says Fisher. “TJ O’Connor developed the general arrangement drawings to an agreed level and then we took ‘ownership’ of the designs. Additions and changes to the steel as tenants bought space was our responsibility, which allowed TJ O’Connor to move on to subsequent phases,” he says.

“We were also responsible for both decking and pre-cast floor plate installation, which gave great flexibility and better use of labour around the project. Our men are skilled in steel erection, metal decking and slabbing, so if there was a hold up in one area they could be transferred to another section.”

The overall frame was constructed in a large number of sections. The main retail building, which consists of 10 storeys above two levels of car parking, was divided between expansion joints into individual steel frames of around 4,000t each and designated Areas C, D/E and G/H. Area K/L is the main five storey, steel and composite construction car park and added to all this are a number of further steel framed satellite buildings including Building 9, a cinema complex.

Each area and building was divided up further into sections which were erected to full height in sequence away from perimeter retaining walls and towards the particular site entrance that provided the point of supply. “Building up sections to full height worked well,” says Sisk Project Director Philip Howard. “All of the steelwork had to be in, including plant room steel, before moving on to the next section, which gave more certainty of getting it all done first time around without encountering problems later.”

Area C alone was built in 14 sub phases, each containing around 250t of steelwork including mezzanine levels. FEL also had to provide temporary bracing for stiffness as sections of steelwork progressed ahead of concreting the composite floors that tie in with the concrete cores of each ‘area’.

The structural grid is generally a large 10.4m by 10.4m but varies due to the frames’ mixed use. With a transfer level to accommodate the lower two floors of car parking, the result is some plate girders built up from heavy sections including flanges up to 100mm thick. Heavy plate girder work has also helped to keep down the depth of construction zone, with service openings provided in floor beams. Cellular beams were originally proposed but a more exacting look at the services that would be needed allowed FEL to change this to secondary beams typically 457x191x UB 74 with five 275mm diameter web openings.

Changes included the first use of the Corefast steel core system, which was selected to speed up construction of the cinema complex, and a significant alteration to Area G/H. This features one of the atriums and a six storey semi circular staircase. Originally designed in reinforced concrete, Sisk asked for the staircase to be changed to steel to shorten the construction time. FEL fabricated bespoke plate sections to suit and erected the staircase in three days.

Then came the Monsoon change. According to Crossridge’s Project Manager Pat Lafferty, the developer was determined to avoid having a food hall area containing a collection of fast food outlets. Crossridge preferred to develop a single business operated by the shopping centre and offering different types of freshly prepared food.

This is high up in Area D/E, the second atrium section, which also features several elevated walkways and a full height glazed elevation. Realisation of the developer’s catering aspirations, after erection of the elevation steelwork, brought a request for extensions of two upper floors beyond the glazing line.

“TJ O’Connor carried out a major reassessment of the structure and designed a system of strengthening the external terrace transfer structure so it could support two further floors,” Fisher says. “The engineer’s solution involved welding new UC sections to the underside of the existing 914mm deep beams.” FEL first had to design a temporary propping system and jack up the floor loading the transfer beams. Welding and reloading of the transfer structure then allowed completion of the two floor extensions.

“This and many other changes requested would have been impossible in the time available using reinforced concrete. Tenants nearly always want changes. The beauty of steel is that it is unquestionably more flexible,” says Philip Howard.

“Nothing was too big a problem and every one of the partners took a share of the workload,” adds Pat Lafferty. “There would not have been such a high quality of space if everyone had not been so willing to make it work. The relationship was quite unique.” 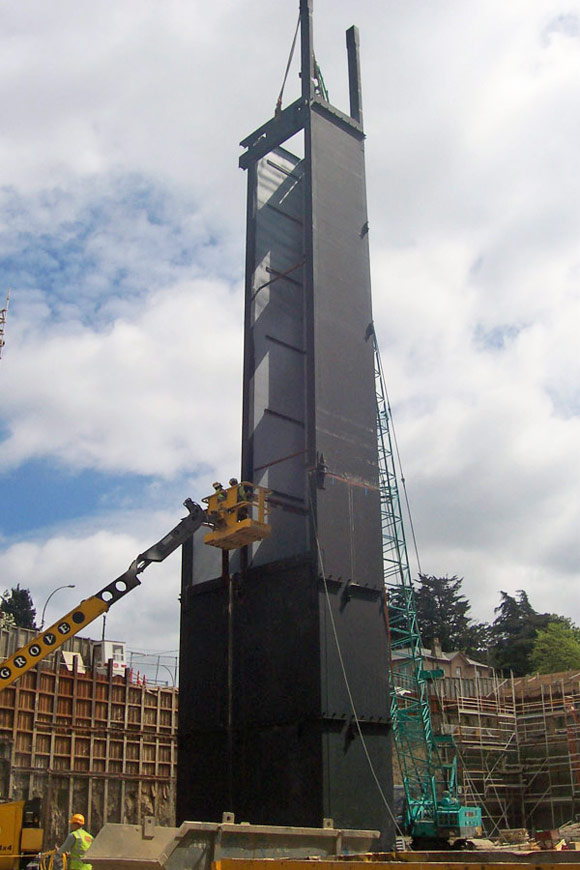 The debut of the Corefast steel core system came about following bad weather which had affected the reinforced concrete programme for the Dundrum cinema building.Typically, main contractor Sisk was already needing eight weeks to construct each core, plus concrete could not provide the architect’s wish for a thin core wall. So TJ O’Connor Engineer Pat Duffy looked for alternatives. “Corefast was much quicker. We would not have been ready in time for the steel frame if the engineer had not changed to a steel core,” says Sisk Project Director Philip Howard.

Corefast uses Corus Bi-Steel panels erected in sections and filled with concrete to produce an extremely strong composite structure (NSC February 2005). At Dundrum, four intumescent paint coated units were used to create the 22m, three sided lift core in five days over a period of two and a half weeks. Corefast has since been awarded two more high profile contracts, in Glasgow and Manchester. 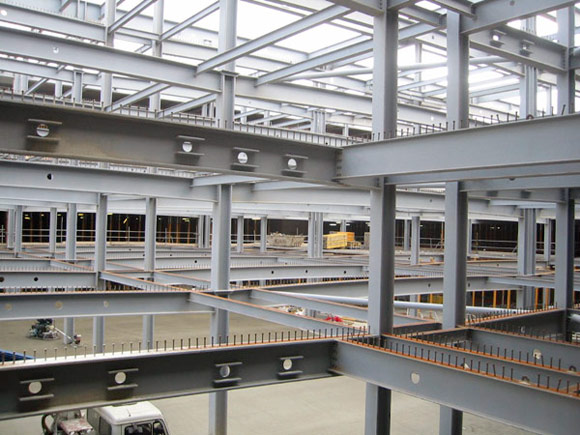 Dundrum’s five storey car park structure contains 4,100t of structural steelwork with 54,000m² of pre cast concrete plate flooring, mostly 100mm thick with a further 100mm ‘topping’. “This car park had to be a step above all others,” says Dundrum Project Manager Pat Lafferty. And so it has been built. Ventilation shafts at each double-column support keep the air clean and the internal structure is painted white and well lit with floors colour painted to mark out parking spaces and walkways.

However, according to FEL Managing Director Ernie Fisher, construction of the car park – Area K/L – was far slower and more problematic than other phases. “Permanent formwork needed temporary propping for pouring concrete on 7.8m slab spans. This was an ever present health and safety issue and had a marked effect on the construction sequence in comparison to areas where metal decking was used to support suspended floor slabs.”