All change at Victoria 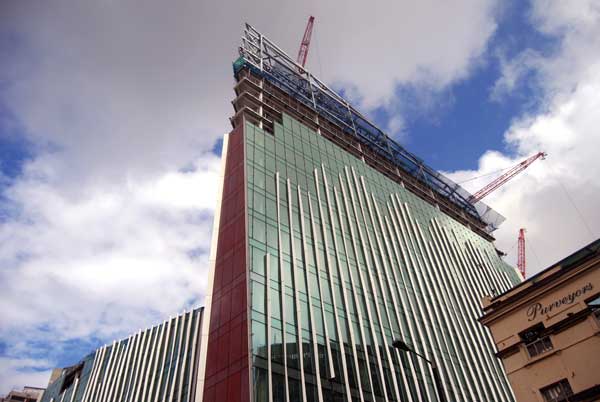 Phase one of Nova Victoria , which will transform a huge island site opposite the mainline railway station, is in full swing and due to complete next year, reports Martin Cooper.

Sandwiched between the Palace of Westminster, Buckingham Palace and the upmarket residential area of Belgravia, Victoria has always been a prime London location.

Even more so today as a number of recent office developments have seen businesses such as Channel 4, Microsoft and the Telegraph Media Group as well as high-fashion names such as Jimmy Choo, Tom Ford and Burberry make the area their home.

More high profile firms and residents are likely to follow suit as Nova, one of the largest schemes in the area, and one that will transform a 5.5 acre island site opposite Victoria Station, is due to complete next summer (2016).

The first phase started in June 2013 and consists of 44,600m² of offices, 7,500m² of retail and restaurant space, and 170 luxury modern apartments all accommodated within three landmark buildings. 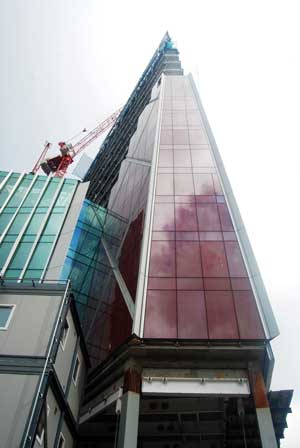 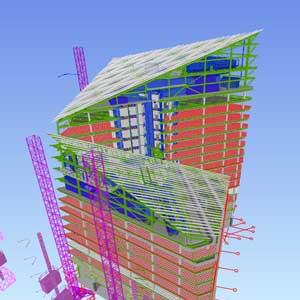 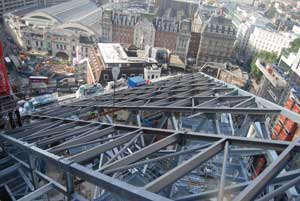 Sloping roofs adorn both of the office/retail blocks

This prestigious project’s location has thrown up a number of challenges for main contractor Mace, as Project Director Tony Palgrave explains: “The site is surrounded by busy roads so logistics are complicated, we have theatres and hotels close by which means we have to keep noise levels down at certain times. The Victoria Underground Station upgrade works are ongoing right next to our site, while below us there is a protected zone for the forthcoming Crossrail 2 project. We also have to contend with two major sewers, one of which runs right across our site.”

All of the project’s challenges have been overcome and the job, including the steel construction programme, is on schedule.

The major steel construction elements of Nova are the 15-storey North and 21-storey South office blocks. As well as Grade A office accommodation, both of these buildings will have ground and first floor retail and restaurant spaces.

“At the early design stage we had both concrete and steel alternatives for the office blocks,” says Robert Bird Group Managing Director David Seel. “Steel was chosen as the best option to create the premium office space desired as it meant we could halve the number of internal columns.”

Together these steel-framed structurally independent buildings occupy just over half of the site’s footprint. Interestingly, the gap between the buildings has been designed to correspond with the Crossrail 2 exclusion zone, as piling was not possible in this area.

The erection of both blocks was staggered, which allowed steelwork contractor Severfield to make use of the project’s six tower cranes for all of its unloading and lifting duties.

The superstructures’ steel frames begin at ground floor level with a complex connection to the site’s numerous plunge columns (see box). As many of the structural columns are inclined, Severfield has to ensure the plunge to structural column connection joined exactly.

Based around centrally positioned concrete cores, both of the steel frames were erected on a 9m-perimeter grid pattern with some internal spans of up to 16m. Each building features a mix of vertical and inclined façades and this sloping geometry has necessitated the use of bespoke fabricated box section columns, measuring up to 600mm × 300mm.

Complex inclined roofs adorn both Nova North and South, with the latter building having by far the most complex steel-framed roof as this one slopes in two opposing directions.

To erect these high-level steel lattice structures a huge piece-count of individual steel members has been lifted into place to form wedge-shaped prisms. Much of the roof steelwork is galvanized because it will be left exposed to the elements.

Nova North has an inclined roof and flat architectural featured roof grillage. The roof extends from levels 10 to 15, all of which are plant spaces with the exception of one upper floor which has some office space.

Topping Nova South are two inclined roofs, containing plant levels from 10 to 15 and then upwards from 16 into an architectural peak at level 21. Again the uppermost level of this block also contains plant areas.

“The roofs, especially the South which pitches in two directions, are made up of bespoke steel elements,” says Severfield Contracts Manager Martin Clyne.

Two trusses add to the complexity of the South roof. The truss members were delivered to site as individual sections and lifted by the tower crane to the level 10 slab, which was used as a temporary laydown area during erection.

Each truss was built up in its final position and due to its shape, was temporarily propped with a column and jacking system from the Level 10 slab. Once the first section was securely in position, the remainder of the sections were built from it. The trusses once complete support the Level 11 and 12 plant room floors.

On the North roof, a transfer girder was designed and installed at Level 12 due to the long span between columns. The girder is 15.4m long and 1.5m in depth and weighs 25.3t. The completed girder was outside of the tower crane capacity and so to overcome this it was spliced at three points.

A further 150t of steelwork has been erected as a rooftop plant enclosure on the residential block 3.

The first phase of Nova is scheduled to complete next August, by which time phase two, which consists of another mixed-use building that partially wraps around the nearby Palace Theatre, will have begun. 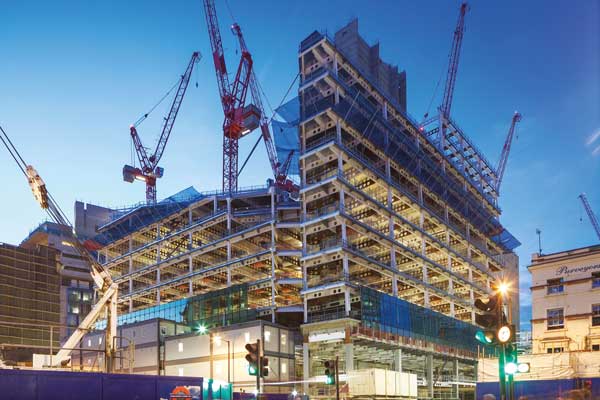 A top-down construction method, whereby the basement works were undertaken simultaneously with the building of the project’s superstructure, was used on Nova.

“It’s all about getting the steel frame started as quickly as possible and the top-down method allows this by creating a much faster programme,” says Robert Bird Group Managing Director, David Seel.

The project’s basement covers the entire site and is four levels deep. To create this large space, early works included making sure ground movements were kept to a minimum to protect the major sewer that cuts across the site, as well as the nearby London Underground Lines and the new Victoria Station pedestrian tunnels.

A number of existing piles from previous buildings had to be located prior to the installation of 240 steel plunge columns that consist of 40 different profiles and are installed to a depth of up to 20m.

The majority of the existing piles have been left in the ground, but a few had to be extracted as their position would have hindered the project’s desired 9m × 9m steel grid pattern.

Some plunge columns acted as temporary supports for the cores, allowing them to be constructed early in the programme, which in turn allowed the steelwork to start sooner.

“Using steel plunge columns gave us two advantages,” adds Mr Seel. “They acted as temporary steel supports for the cores and then later they were cast in concrete to become part of the project’s composite reinforcement.”

In total more than 2,000t of the overall 9,000t steel tonnage supplied and fabricated by Severfield has been used below ground level at Nova.