Market design checks out with steel 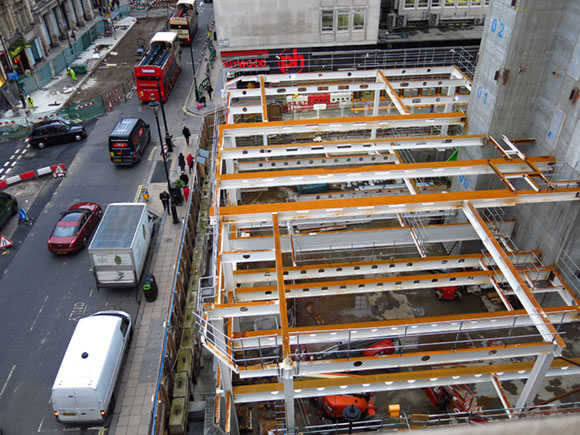 The flagship of this multi-million pound vision is the St James’s Market scheme, just south of Piccadilly Circus, that will deliver 24,100m² of commercial and retail space across two eight-storey blocks situated between two of London’s most prestigious thoroughfares, Regent Street and Haymarket.

One of the eight-storey buildings at 14-22 Regent Street will feature a retained façade, allowing the new structure to fit seamlessly into its historic streetscape. Behind the façade a new steel framed structure will be erected accommodating retail at basement and ground floor levels, with offices above.

The 52-56 Haymarket block has a slightly smaller footprint but will be highlighted by an aesthetic curved cladding incorporating glass, Portland Stone and horizontal metal detailing in response to the surroundings. Like its neighbour this steel framed structure will also have retail space at basement and ground floor levels, with offices occupying the upper seven floors. 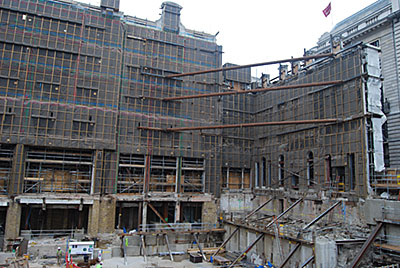 The retained façades of the Regent Street plot

Working on behalf of Crown Estate and Oxford Properties, main contractor Balfour Beatty started onsite in September 2013. A demolition phase commenced almost immediately, with the entire Haymarket plot cleared and the adjoining Regent Street block demolished with the exception of the 140m-long retained 1920s façade that runs along the most part of three elevations.

Early works have also included excavating and deepening the Regent Street block’s basement and making provision for its service ramp. As the Haymarket structure’s basement lacks the space for a ramp, a 5.5m-long tunnel beneath St Albans Street will connect both buildings.

“The demolition of Haymarket was fairly straightforward, but during the same phase on the Regent Street block we had to simultaneously install a 200t steel facade retention system which took nearly four months,” says John McCallion, Balfour Beatty Project Director.

Regent Street’s Grade II listed retained façade is predominantly 350mm deep and made of masonry wrapped around a supporting steel frame. To keep this five-storey high wall stable during the demolition and construction phase, engineers from Wentworth House Partnership designed a support frame consisting of a series of steel belt trusses and braced steel towers. The façade is clamped to the belt trusses with ties through the windows and internal waler beams, all carefully set out to avoid clashes with the new steelwork.

The belt trusses are substantial and serve a double purpose by also supporting some of the site’s welfare cabins high above Regent Street’s pavement.

Only when the majority of the building’s steel frame is up, and the façade has permanent stability from the diaphragm action of the new floors, will the retention system begin to be dismantled.

Steelwork contractor William Hare started the steel erection programme on the larger Regent Street site in late September. It is scheduled to finish both structures (2,500t on Regent Street and 1,000t on Haymarket) by May 2015.

One of the major design issues on both of the structures was the integration of services and how to maximise the floor-to-ceiling heights, while being sympathetic to the existing window levels in the retained façade.

“On both buildings all of the services have been integrated within the floor beams,” says Adam Suthers, William Hare Project Engineer. “This was quite a challenge as the floor beams had to span quite long distances for the required column free areas, while at the same time not be too deep so as to interfere with the needed shallow floor construction.” 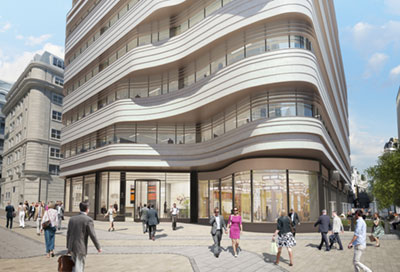 The solution was for William Hare and structural engineer Waterman to design steel frames utilising a mixture of UKB sections and 510mm deep fabricated cellular beams. These sections have 350mm deep holes to accept the services within their depth and were stiff enough to span the required grids, which are up to 18m in places.

In order to keep the floor zone as shallow as possible a 140mm deep topping will be applied on each floor level with the exception of the first floor where a thicker 250mm slab will be need for acoustics.

“It is important to isolate the retail zones from the commercial spaces within each building,” explains David Fung, Waterman Director.

Both buildings have a similar long span design with a maximum of four internal columns with concrete cores supplying the lateral stability to the frames.

Centrally positioned within the building will be a large full-height lobby/entrance hall. A highly architectural feature steel scissor staircase will be positioned and supported off a 550mm × 550mm × 25mm Jumbo SHS at each level.

Fabricated from 75mm thick plate the slender staircase will be delivered to the project in 16 single prefabricated flights. These will then be welded onsite, with each flight propped until it is welded to the upper support beam.

The staircase will be clad in Corian, a decorative material usually used for bathroom or kitchen top surfaces. Because pieces can be bonded tightly together, the Corian cladding will give a seamless joint free surface to the staircase. To achieve this finish, limiting deflection and vibration of the steel staircase structure is critical.

Meanwhile, the Haymarket block’s main architectural feature is the main elevation’s cascading façade (see above). This will be formed by the steel floor plate stepping out at each level, with a series of 1.5m wide cantilevers achieving the desired façade design.

The St James’s Market project is scheduled for an early 2016 completion. 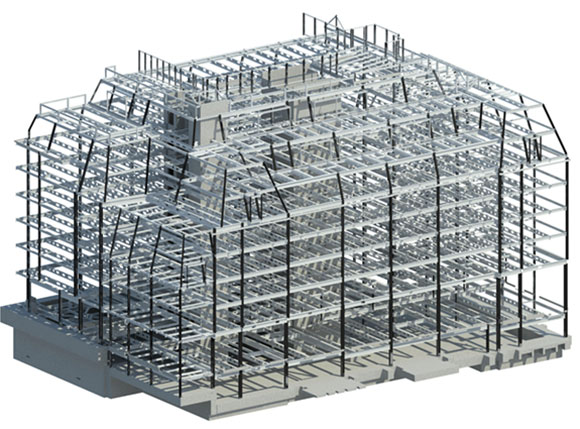 Coordination between the entire project team ensured the most efficient and quickest methods of construction were used for this project.

“To make sure all of the services were integrated within the floor beams and there were no clashes anywhere on either frame was an exercise reliant on the early production of a BIM model,” says Dylan Wright, Balfour Beatty Structural Manager .

“It was important that all of the project team was involved and this will ensure a quicker construction programme.”

Another area where coordination between trades has paid dividends was the design of embedment plates. As the connector for the steel beams to the concrete cores in each of the two buildings, it was crucial that they were designed and positioned correctly for efficiency and safety.

“The long span beams are heavily loaded especially at the corners of the buildings where the spans are longest, so these were key areas for the plates to be designed and installed correctly,” adds David Fung, Waterman Director.

Summing up the BIM philosophy, Adam Suthers, William Hare Project Engineer says: “It takes more than just a BIM model, it requires collaborative BIM personnel which is what we have on this project.”

The redevelopment of buildings behind retained façades 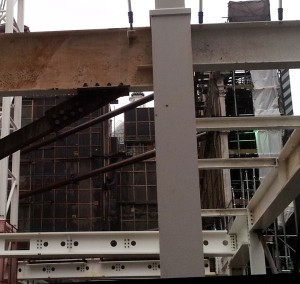 The single most significant constraint on the design of a new building behind a retained façade is the determination of the floor-to-floor height by the existing fenestration. The flexibility to adjust the ceiling height and floor “sandwich” is limited and increasing one inevitably means reducing the other. Equally significant for the construction phase is the presence of the original walls, restricting access to the building perimeter and the site.

Limiting the number of crane lifts over the façade is very important. The adoption of steel framing with floors supported by metal decking means that multiple lifts of precast units are avoided. The floor plates are thin and lighter than with concrete. Structural steelwork allows spans of up to 18m which reduces the number of columns and increases the quality of the commercial space above the ground floor retail areas. Post-tensioned floors are impractical because the edges of the slabs are concealed behind the retained façades. The table forms needed to support wet concrete and the difficulty and crane time involved in transferring the forms are avoided.

At ground floor, easily lettable retail spaces require flexibility in the structure to create openings for communication with the basement. Steel floors provide a simple means of achieving the holes because the slabs are thin and the steel framing provides obvious delineation of the possible arrangements. Cutting holes through concrete slabs is much more difficult by comparison.

At the building perimeter, the retained façades are of varying thickness, reducing in steps with height. In order to maximise the lettable area of the space, the columns are stepped out at the floor level above where the wall thickness reduces. This avoids an increasing gap between the back of the façade and the new steel column. The retained façade is tied into the floor diaphragm either by welding to the original columns which remain within the façade or by drilled in fixings to the back of the wall, the inner skin of which is usually either brick or block. Resin anchors are used to avoid bursting forces. Tests are carried out to determine the weldability of the original steelwork and the strength of the masonry.