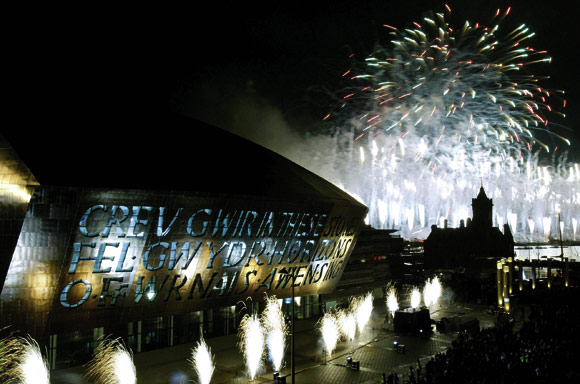 The Wales Millennium Centre, the new home of the Welsh National Opera, threw over some outdated views about the suitability of steel for auditoriums, and is now a winner of a major European steel design award.

Clad in rough-hewn slate and timber and with a central stainless steel-clad auditorium, the Wales Millennium Centre has endured sniping about its appearance. But Cardiff’s landmark theatre and opera house, constructed on time and to budget within 33 months, has been recognised for its innovative use of steel in the 2005 European Convention for Constructional Steelwork Design Awards.

The lottery-funded building contains an 1,800 seat theatre which is the home of the Welsh National Opera, but is designed to house a range of activities from opera and ballet to musicals.

Arup Director Chris Jofeh, writing in New Steel Construction in February 2004, said: “It was often thought that, because of the complicated geometry of balconies and the need for massive walls, theatres were best constructed from in-situ reinforced concrete.” This was challenged by a number of Arup-engineered theatres in the US, which “showed that steel-framed construction was a credible alternative to concrete”. Composite floors using normal and lightweight concrete on profiled metal decking “proved practical, even in regions of changing three-dimensional curvature such as the theatre balconies.” 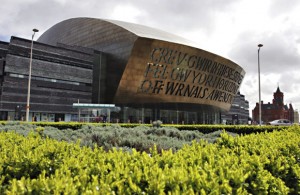 Advantages for the Cardiff project included the speed with which the primary frame could be erected and made watertight, allowing early commencement of the installation of services and theatrical equipment; and the ability to separate the design of the frame while the architectural and acoustic design continued to evolve.

A lighter steel structure could have been more susceptible to vibration than a concrete one, it was thought, but three-dimensional vibration analysis showed that even the main theatre balconies, which cantilever 10m, showed the concerns to be unfounded.

The superstructure is divided into a number of structurally separate buildings, to prevent unwanted noise being transmitted from the structure into the theatre.

One of the key components is the flytower, which houses the theatrical equipment needed for the stage. It has to be twice the height of the visible area of the stage to allow scenery to be lifted out of the audience’s view. Unusually, the architect merged the tower and auditorium into a single curving unit, clad in chemically weathered stainless steel.

The flytower columns are about 35m tall with design axial loads of up to 11,000kN. Iain Hill, Design Director of steelwork contractor Watson Steel Structures said the tower was one of the most challenging parts of the structure to erect. “It was fairly complex in design and erection. It needed carefully-designed temporary works and careful sequencing to keep it stable during construction.”

Storey-high trusses span over the building to support the roof. Their upper booms carry a concrete/metal decking roof slab while the lower booms support a ceiling formed of precast panels with an insitu topping. These two layers between them provide sufficient isolation to keep out aircraft noise.

Mr Hill and the leader of Arup’s structural team, Lorraine Bradley, went to the ECCS Annual Meetings in Nice last month to collect the award.

The judges praised the project in glowing terms: “The Wales Millennium Centre demonstrates that steel has substantial benefits to design teams even when acoustic parameters are important. The design team effectively used a wide range of different structural elements to achieve a most exciting solution. The use of steel in an auditorium is novel. The use of different materials, because of the location of the structure, has been satisfied by the design team in a most striking manner.”

Speaking before travelling to the awards ceremony, Mr Hill said: “We’re very pleased to get recognition of a difficult job done well.”

Arup’s Jofeh added: “We’re obviously delighted. It’s a credit to a team who worked long and hard on the project.”