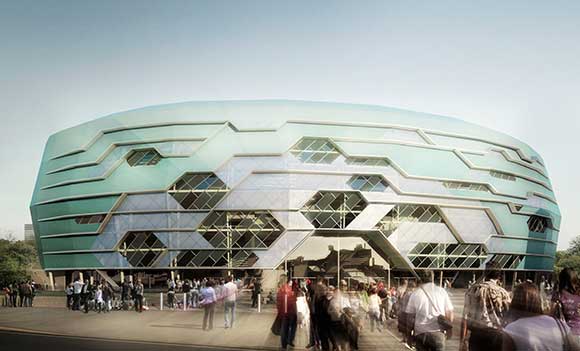 A series of long span trusses form the roof and stage for a spectacular new arena under construction in Leeds. Martin Cooper reports.

Many cities and towns in the UK have entertainment venues, but a new arena being built in Leeds is far from being run of the mill as it will be a focal point for regeneration as well as acting as a commanding gateway to the city centre.

With a seated capacity of 12,500, Leeds Arena has already been described as having one of the most striking and unique designs in Europe, satisfying the local populace’s and client’s desire for a building that is distinctive to the city. 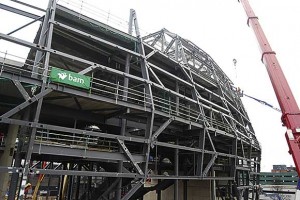 The main façades are rounded and form a domed effect which ends with a flat roof. Formed with two columns, one sloping outwards and a second member spliced to the top and cranked inwards, these curving elevations will be clad with a honeycomb design of glazed panels which will feature a changing kaleidoscope of coloured lights.

The city council says that in the evening, the front of the building will change colour or pattern dependent on the show or mood of the arena at the time. The venue may be pink for a Pink show, purple for Prince, or green for Green Day! The options are endless and the completed project will certainly add to the night time cityscape.

Creating a large indoor arena with spans of up to 70m will invariably mean a structure built with steel. “Entertainment venues need large column free spaces and steel offers the best and most cost effective method of achieving these requirements,” says Gordon Alexander, BAM Construction Manager. 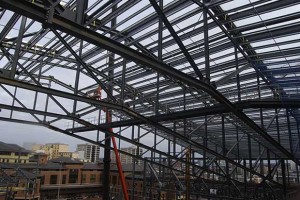 Work on site began early last year with some major earthworks needed to prepare the site in readiness for the construction phase which kicked off in May. Two concrete cores and a couple of shear walls were then built, providing the stability for the steelwork which was then able to begin its erection programme.

Along with the perimeter curving walls and the initial terracing zones, one of the first parts of the steel frame to be erected, by Fisher Engineering, was also the largest single component and the most time consuming element on the project. The steelwork erection sequence dictated that the 54m long × 10.5m deep proscenium arch truss (spanning the arena’s stage) would have to be lifted into place early, as it would then allow the roof trusses, many of which connect to this 180t truss, to be lifted into place.

Fabricating such a large truss and then getting it to site required a lot of planning and design work from Fisher, as well as the entire project team.

“We had to deliver the truss to site in 32 separate sections as the local authority has a maximum axle weight restriction of 12t per axle,” explains Robin Hamill, Fisher Engineering Project Manager. “This meant the entire truss was delivered in nine trailer loads.”

Fisher Engineering had to ensure that they allocated each of the 32 steel sections to a specific trailer load. This provided the site assembly team with the correct sequence of steel pieces for putting the truss together.

Assembling the truss took three weeks, and in order to make the lifting procedure as easy as possible this work was carried out adjacent to the area where it would be installed. Once assembled, the challenge was to get the truss into place and then stabilised by its surrounding and supporting steelwork. 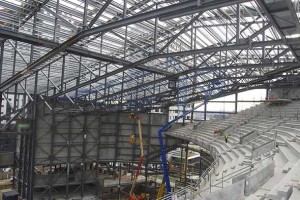 Two large mobile cranes (450t capacity and 500t capacity) were needed to install the truss. However, having to utilise such large cranes for this job meant the project team had the challenge of getting these machines to site, bearing in mind both units exceeded the permitted road axle weight allowance, due to their ballast counter weights and telescopic jibs. The cranes had to be stripped down to reduce their overall weight and delivered to site on a number of trailers along with their accompanying rigging.

Once the cranes and the truss were assembled the lifting procedure was able to begin and this lasted three consecutive days.

“We actually had the truss up and connected to its two supporting columns within the first eight hours,” explains Mr Hamill. “However, the cranes had to remain in position holding the truss until we had the steel frame to the rear erected as this would give it stability. Erecting the frame took 75 hours of continuous working, day and night.”

“Even though the 500-tonner had to lift truss sections up and over the erected arena steelwork, by placing it outside it was next to an area were we could assemble large truss sections without interfering with other site activities,” explains Mr Hamill.

Half of the roof trusses’ lengths were assembled inside the arena and this allowed the two cranes to install the 13 roof trusses in a series of tandem lifts. Fisher assembled and erected one complete roof truss per week, which included installing the connecting beams to adjacent steelwork. The largest of the roof trusses is 72m-long with the trusses either side sequentially getting shorter as the arena’s shape tapers.

“Logistics has been the main challenge on this project so far,” sums up Mr Alexander. “We’ve had large steel segments being assembled in the middle of the arena, while the area has also had to accommodate four or five cranes and numerous cherrypickers for the steel erection process. With so many machines working in a tight environment, planning has been key.”

Construction work is scheduled to be completed in March 2013, and once a two month fit-out programme has been undertaken, the venue will be ready for a summer opening. 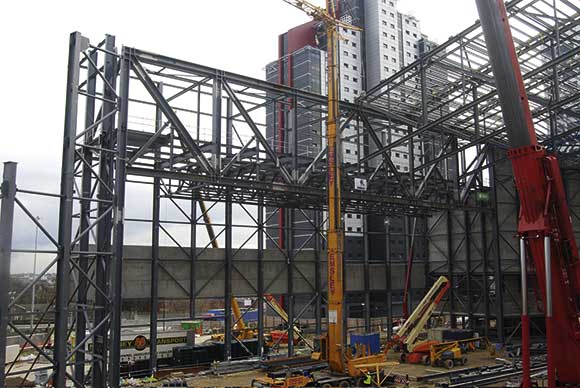