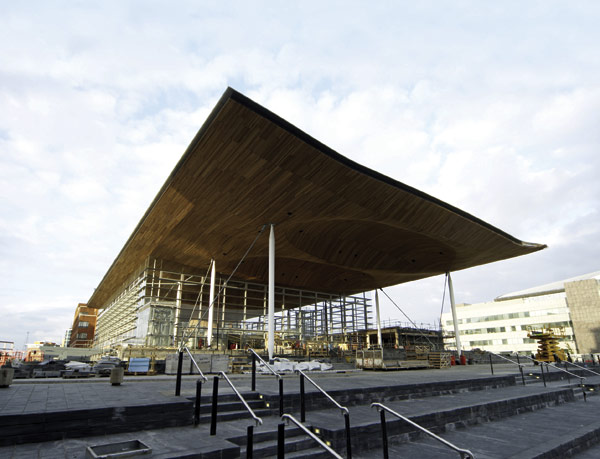 This structure features an undulating roof, held up with minimal visible effort, suspended over a transparent enclosure atop a solid plinth.

When Her Majesty the Queen formally opened the National Assembly for Wales on 1 March this year she said the structure had raised the benchmark for public buildings.

“The skill and imagination of those who’ve designed and constructed this remarkable example of modern architecture have given you a dramatic setting in which to work,” Assembly Members were told.

The building is located on a prime spot in the Welsh capital overlooking Cardiff Bay, and in the words of the judges, this impressive structure attains the quality and grandeur that is expected of a National Assembly.

It incorporates local materials as much as possible, while a loose fit design ensures future adaptability. The building stands on a plinth which is a simple exposed concrete frame wrapped in Welsh slate. A total of 12 steel circular columns support the roof around tall glass clad facades.

As one of its most distinctive features, the undulating roof appears to hover over the 5,000m² building, in an impressive display of steel structure and cedar cladding. These were combined to create a feeling of generous soaring space, with a sense of minimum structural effort. More than 420t of steel and 21,900 bolts in 2,088 connections were used on the roof.

The roof is divided into six modules, all of which are typical except one which supports a lantern and wind cowl. Each module measures 12m x 41.5m with the end modules extending a further 2.5m on their long edge, giving a total plan area of approximately 3,200m².

Interestingly, the 6m high cowl which naturally ventilates the building by drawing air out of the debating chamber is the largest ever erected in Europe.

Ed Newman-Sanders, leading the roof design for Arup says the main challenge was marrying together the architect’s vision for the roof with a modular structure that ensured the steelwork and roof finishes benefited from repetition and consequent ease of fabrication and erection.

“In order to meet the strength and stiffness requirements of the 26m spanning arches and the 8m edge cantilevers, and to create the undulating roof form, steel was the only sensible and cost effective material that could be adopted,” Mr Newman-Sanders says.

The steel roof acts as an offset tied arch in the transverse direction. The vertical thrust at the base of the arches is resisted by the primary columns and the horizontal thrust is resisted by offset ties at the edge of each module, which are connected to the foot of the arches by angled struts. These struts also support the perimeter cantilever which extends up to 15m at the corners of the roof and steel again was only realistic material to use, comments Mr Newman-Sanders.

Steelwork contractor S.H Structures pre-assembled the roof off-site and built one bay at a time using common valley beams to ensure an exact fit. The roof predominantly comprises short members, which enabled S.H Structures to  optimise sizes of prefabricated sections for transport and then to combine these on site at ground level into the heaviest assemblies suitable for craneage.

Rowecord Engineering were contracted to supply all ancillary steelwork and this included four lift shafts, internal bridges and walkways, and two external bridges linking the Assembly with an older adjacent office block.

Mike Hill, Rowecord’s Project Manager says the most challenging aspect was lifting the external bridges into position. “Because of the confined nature of the site we had to fabricate the bridges off site as one piece and then lift them into position. This required some tricky crane work as the whole operation took place between two buildings.”

In order to speed up on site construction, Mr Hill says the lift shafts were also fabricated off site and these had to be lowered into the pre-erected structure from above, manouevring  stairs vertically down to each landing position.