No drama for new steel trusses 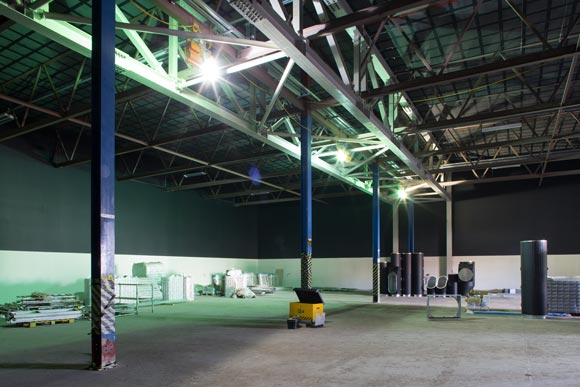 The existing structure’s internal columns are being removed, once a truss has been installed, to create a column-free drama stage

An existing steel framed structure has been incorporated into a drama production hub with a series of new transfer trusses replacing internal columns to create open plan spaces.

Known as The Space Project, it is located at Gorton, close to Manchester city centre, and so called because it will include more than 5,100m² of dedicated studio space split into five purpose built, sound proofed production stages.

Sue Woodward, Space Project Director explains: “Demand has grown to the extent that we have had to repeatedly turn productions away. This, coupled with the tax incentive programme, made a sound business case for investment. There was already huge interest in our new site, even before the steel was on site.” 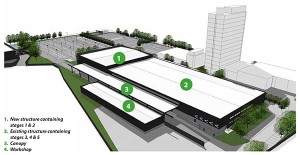 Three of the stages (3, 4 and 5) are being built inside an existing steel structure, formerly used by Fujitsu Computers, while a steel framed extension to this building will house two more stages (1 and 2).

Notable features of the new facility include a dedicated two-storey support space adjacent to stages 3, 4 and 5 that will accommodate dressing rooms, showers, a laundry and production offices.

Meanwhile, to the rear of the building the overall site will also boast a 900m² standalone steel portal frame prop workshop.

A lightweight steel canopy is connected to both the stage building and the prop workshop, forming a covered roadway that will allow sets/props to be transferred between the two areas, without being subject to inclement weather. 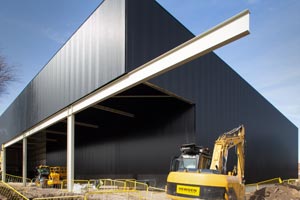 Work on the project began last year with main contractor Willmott Dixon’s initial task to demolish a portion of the existing structure.

“This part of the building was an office area which had a layout unsuitable for our needs and so it was demolished,” says James Hackett, PRP Architects Associate. “However, the rest of the building consisted of three large computer assembly halls which were suitable to integrate into our new facility and so this was retained and converted into three production stages.”

The retention of as much of the existing structure as possible was a cost-effective and sustainable option. Once the offices were demolished existing slab and foundations were also incorporated into the new building.

“The structure’s original design drawings were available so, along with intrusive investigation works, we were able to verify the size of the foundations. Subsequent loading analyses ensured the new steel structure could utilise the existing pad foundations,” says Rory Harris, Integra Consulting Engineers Director.

There had been a movement joint between the offices and assembly halls, which formed a natural spilt in the original structure.

“We recreated this movement joint when we erected the new steel frame, effectively creating a separate new build structure from the old structure,” adds Mr Harris.

The steel framed extension is a braced standalone structure, fully independent from the existing building. It accommodates stages 1 and 2, the largest of the five spaces. Both of these stages are 9.4m high, offering 1,039m² and 987m² of internal column free space respectively. 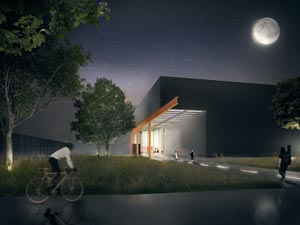 The perimeter columns are spaced at 7.2m centres, matching the original structure’s foundations. However the roof trusses needed to be at 3.6m centres, so every second truss is connected to adjacent columns via transfer beams.

“The roof trusses not only create the open plan stage areas but their bottom chord is used to hang equipment, lighting and cameras. It was calculated that a 3.6m spacing was the optimum distance for production set equipment,” says Mr Harris.

Steelwork contractor EvadX brought these 2m deep trusses to site in two 12m long sections. They were spliced together on the ground before being lifted into position using one mobile crane.

“All of the stages have sound separation partitions for enhanced acoustic performance,” explains Jaime Lowther, Willmott Dixon Project Manager. “This means all of the steelwork connections are acoustically isolated, including the connections between the old and new build parts of the project.”

Stages 1 and 2 are purpose built column free facilities within a new steel framed structure. However, the large spaces within the existing building were originally designed with a central spine row of columns, steelwork that has been removed to form the desired open stage areas.

For each of the stages (3, 4 and 5) EvadX designed and installed a 2.5m deep × 30m long transfer truss, running east to west (the existing roof trusses are in a north south configuration) to support the roofs and allow the spine columns to be removed.

New columns were installed, two at either end of the stage, to support the trusses.

“As there was no room for cranes inside the existing building we had to install the steelwork using a forklift truck along with a couple of MEWPs. The steel was brought to site in 5m long sections and had to be inserted through and connected to the old steelwork,” says Gareth Jones, EvadX Project Manager.

“The client was concerned about ponding on the existing roofs, so after the transfer trusses were installed and supporting the roofs, we jacked up the apex by 40mm.”

Temporary works were needed to support the transfer trusses until they were complete and the jacking of the roof was finished.

“However, prior to dismantling the temporary works we had to remove four steel spine columns from each of the three halls using oxy acetylene cutters,” concludes Mr Jones.