Historic planes come in from the cold 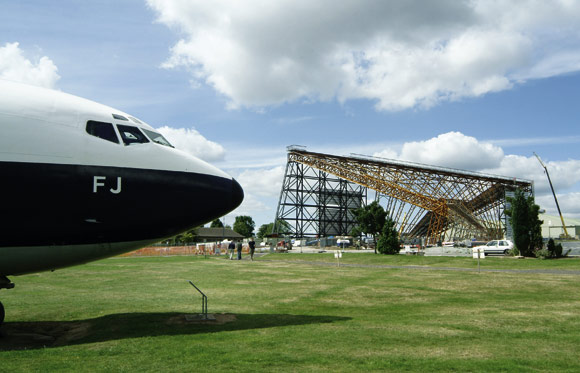 The vast hangar will house 45 aircraft

A new aviation museum in Shropshire designed to evoke the Cold War is set to make its mark on the landscape, reports Margo Cole.

The Royal Air Force Museum Cosford has a priceless collection of Cold War aircraft, including the only surviving examples of some significant aeroplanes. Some can currently be seen huddled together on patches of spare land next to the hangars of the aviation museum at the former RAF Cosford in Shropshire, but they desperately need to be under cover. The materials from which these aircraft, some well over 50 years old, are made include leather and timber, and they do not respond well to the elements, particularly damp.

From next autumn this unparalleled collection will be moved to a spectacular £12M purpose-designed building at the Cosford site. The structure, designed by architect Feilden Clegg Bradley, structural engineer Michael Barclay Partnership and building services engineer Max Fordham, is set to become a landmark in its own right — something co-sponsor Bridgnorth District Council was keen to achieve.

Exhibition designer Neal Potter’s theme for the building’s exhibition is “Divided World: Connected World”, and it will tell the story of the Cold War period from the national, international, social/political and cultural perspectives. Internally the impact on visitors is likely to be dramatic. With only 6% of the building’s envelope glazed and all structural elements visible, the interior is designed to evoke the atmosphere of the Cold War: dark, brooding, even intimidating. The heavily industrial feel will be emphasised even further by the sight of over 600 tonnes of exposed and unpainted structural steelwork. 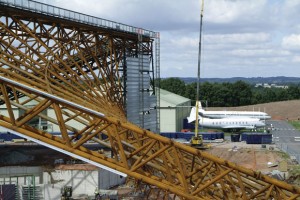 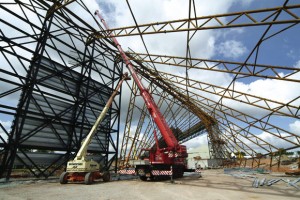 The structural frame was erected in just 10 weeks 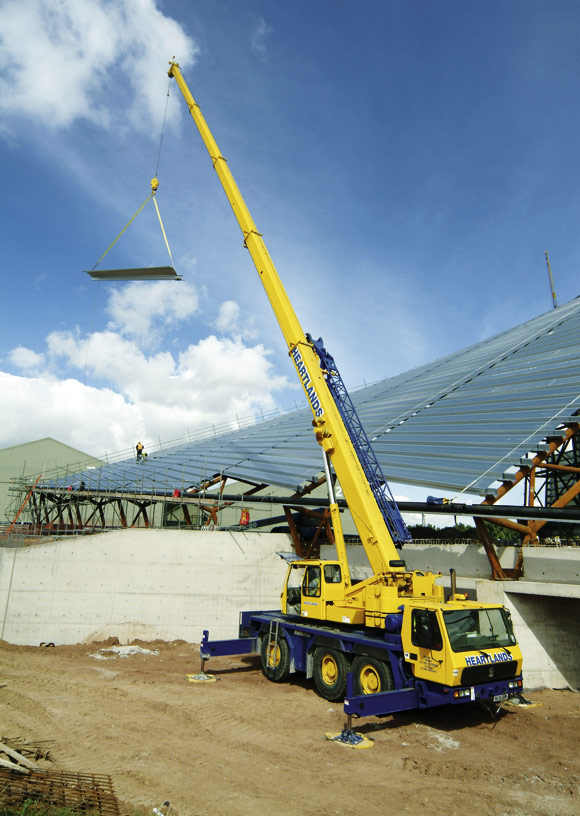 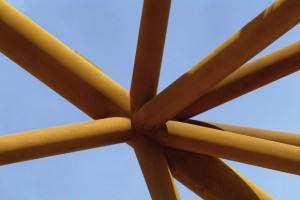 The museum’s design parameters were minimal: provide as much cover for as many aircraft as possible in the best environmental conditions within a pre-set budget. As Michael Barclay Partnership’ Associate Malcolm Brady says: “This could mean anything from a fully climate-controlled building for a handful of aircraft to a tent that provides basic shelter for all of them.” The team’s solution lies somewhere in between. It is a solid building large enough to house all 45 aircraft in the collection, including the massive Short Belfast, with its 45m wingspan, and an example of all three V-bombers: Valiant, Victor and Vulcan. Although it will be unheated, humidity will be controlled.

The design is spectacular, as is the scale. The building measures 160m in length, has a maximum width of 60m and is 30m high for its entire length. It consists of two sections of a vertical spine wall and a roof formed by a series of steel trusses of different lengths. These fan out to create asymmetrical portal frames forming two hyperbolic paraboloids — surfaces that curve in two directions. Although the finished structure will be characterised by these spectacular sweeping curves, clad in silver, every structural element is straight.

On plan the design provides 6,320m² of exhibition space in two triangular areas which will be divided by a central walkway, representing a world divided by ideology. Aircraft will be displayed both on the floor and suspended from the roof.

“After we had decided on the concept of an asymmetric double curved roof we had two problems: how to analyse it and how to build it,” says Mr Brady.

For the first stage of the analysis the team turned to a consultant specialising in wind engineering. “As there was no precedent for this building we commissioned a scale model and wind tunnel test,” explains Mr Brady. The results were fed into a 3D model built using the Robot program, which allowed the engineer to do a complete analysis of the entire frame. The analysis involved more than 450 different load cases including wind, snow and the weight of aircraft suspended from the roof. As Mr Brady says: “This building couldn’t have been done without a 3D analysis package.”

The analysis showed that the structure is very efficient, with most elements at between 85% and 90% of their capacity. The asymmetrical portal frames are stabilised by the spine walls at the gables, while the roof planes are braced by two large compound trusses. Fully welded joints at the top of the main roof trusses and pins at the bases ensure they are acting as portal frames, except at the ends where the trusses bear on the vertical spine walls.

With the design finalised, the team called in steelwork contractor SH Structures to help out with the buildability issues and to confirm that the structure could be built within the budget. One key issue still to be decided was the cladding — and how to fix it. The designers opted for a proprietary structural metal decking spanning between the trusses, with the aluminium standing seam system fixed on top, but had not worked out exactly how to fix the metal decking to the structural sections.

“We knew the main steelwork was going to be made from circular hollow sections, and that these would have a constant diameter but different wall thicknesses depending on the load they take,” says Peter Redfern, Estimating Manager for SH Structures.

The challenge was to come up with a detail to fix the structural decking to the circular hollow sections. The varying pitch of the trusses means the decking meets each of the top chords at a different angle and with a very limited bearing area, thanks to the circular section.

This led SH Structures to design a “saddle” that could be welded on to the circular sections and then fixed to an adjustable cleat that would create a larger bearing area. The 1,300 welded saddles can be seen in a spiral around the sections as you look along the length of the top chords. To check that the connection was feasible SH Structures built two full size bays 9m long with saddles on top.

Despite this early involvement in the project SH Structures still had to tender for the work when Galliford Try was appointed as main contractor. Having won the order the steelwork contractor then fed Michael Barclay Partnership’s design details into its own modelling package, Tekla Xsteel. The company also carried out a value engineering exercise that resulted in some major savings, mainly through simplifying the connections.

Most of the roof trusses are too long to be delivered to site full length, so SH Structures planned to cut them down after fabrication and weld them back together on site before lifting them into place. One of the money saving initiatives was to replace the welded connections with bolted splices, while another was to assemble each of the compound trusses complete with internal bracing, rather than fixing this on site.

The longest of the roof trusses spans 64m and is displaced by 60mm under its own weight and a further 45mm under wind load. SH Structures has precambered the steelwork to take out the dead load displacement.

Fabrication took 15 weeks, while site erection took just 10 weeks and was completed in August. According to Malcolm Brady the structure was stable during construction because the elements are always braced. “Once the spine walls are erected it is very stable because of the braced element,” he explains. “The compound box girder at the end is very stable, and as each truss is built from there it is tied back with A-frame trusses. It would have been different if the cladding was going on at the same time because it would have acted like a large sail.”

In keeping with building’s industrial feel the design team decided that the steelwork should not be painted, but allowed to rust. It was all shotblasted before delivery to site, and arrived as clean, bright metal. After just two or three days it had turned a vibrant orange. The only lacquering will be in areas where the public could touch the steel — such as around the entrance and the spine walls — but even here the colour will remain.

The industrial feel will be mirrored at the entrances, which will be made of weathering steel.

Although construction is due to finish at the end of this year, the new museum is not expected to be open to the public until autumn 2006, after a complex fit-out that includes a six month period to manoeuvre all the aircraft into place. Once open the building is set to become a visitor attraction in its own right, as well as a fitting home for some of the UK’s most important aeroplanes.