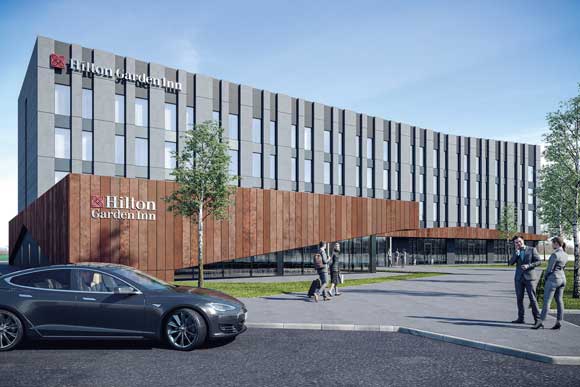 How the completed hotel will look

Speed of construction was one of the main reasons for changing the design of Adventure Parc Snowdonia’s hotel to a steel frame. Martin Cooper reports.

Adventure Parc Snowdonia also offers a zip wire experience; an adventure facility known as Adrenaline Indoors (see Box) that features a caving area, climbing walls, a ninja assault course, high ropes and a soft play zone; while elsewhere on the site there are glamping pods, and a restaurant and bar.

Forming part of phase two of the park’s continuing evolution, a Hilton Garden Inn is being constructed that overlooks the surfing lagoon, and is expected to welcome its first guests at the end of the year.

The steel-framed four-storey hotel will offer 106-bedrooms spread over its upper three levels, while the ground floor will accommodate a conference suite, spa, restaurant/bar and the main reception area.

According to Pozzoni Architecture, the hotel design is striking with a strong, angular design which reflects and represents the surrounding mountainous landscape but built in high quality industrial materials which responds to the past uses of the site. 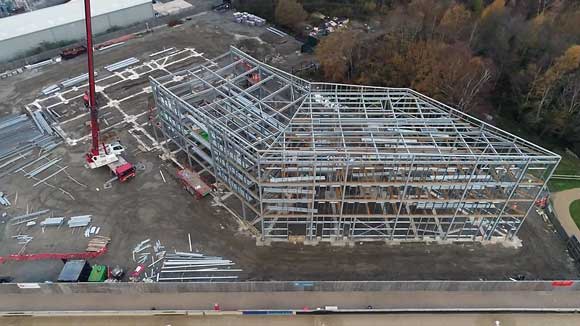 The steel frame was erected in two phases 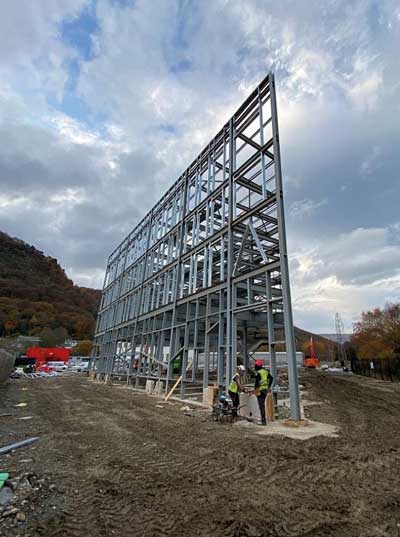 One end of the building has an angular feature tip 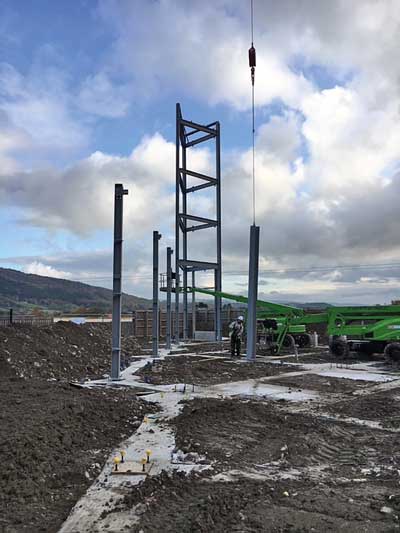 The first steel bay goes up 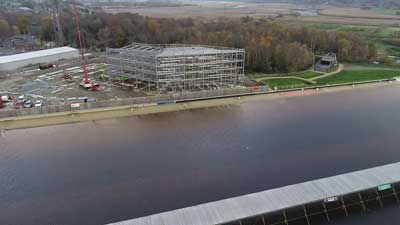 The hotel overlooks the surfing lagoon

The location is such that the hotel will not only encourage visitors to the site but it will also reach out to tourists as a base to explore North Wales and beyond.

HB Architects became involved with the job post-tender when H.H Smith & Sons had already been appointed as main contractor.

“At this stage, the decision to use a steel frame over a cast in-situ concrete frame had already been taken. We were able to quickly coordinate our Revit model in design team meetings, using the steelwork contractor’s frame model to resolve potential clashes and fix the frame design including all secondary support for the cladding at an early stage. This has enabled us to meet the programme and get accurate coordinated information produced quickly,” says HB Architects’ David Coles.

“The hotel’s design was changed after a value engineering exercise as a steel frame was deemed to be a quicker and more economical solution,” adds H.H Smith & Sons Contracts Manager Mike Smith.

Speed of construction is always important on projects, and this job was no exception. The majority of the steel frame was erected by BD Structures in a five-week programme, with the first handover after eight working days. This then allowed the many follow-on trades to get started as soon as possible.

“Getting the other trades started is important, but on this job we have a second phase of steelwork, which could not be started until large areas of the cladding had been completed,” adds Mr Smith.

The second phase of steelwork consists of two single-storey elements which are positioned along the front and back elevations of the hotel. If these areas had been erected along with the main steelwork, they would have hindered the later cladding installation of the main facades.

The single storey part at the front of the hotel will accommodate conference and meeting facilities, while along the back elevation the one-level structure will house a kitchen and plant room. The conference facilities contain the project’s longest pieces of steelwork, as 12m-long beams will be installed to create a column-free area.

Located adjacent to the surfing lagoon and on the opposite bank to the park’s other main facilities, the hotel’s plot had already been cleared and made ready for the construction work a few months earlier.

Prior to the steelwork erection beginning, H.H Smith & Sons installed a series of driven piles and these are mostly 18m-deep. However, in some areas they had to be installed to a depth of 55m, as parts of the site are made up of soft riverbed strata.

Working on a design and build contract, the steel frame was designed by BD Structures and consists of composite downstand floor beams that support metal decked flooring for the structure’s upper levels. Along with the steelwork, precast staircases were also installed, by BD Structures, who completed the work using a solitary 80t-capacity mobile crane.

The steelwork for the three upper floors is arranged in a regular column pattern with typical spans of 6.5m and just two rows of internal columns, which are strategically positioned to coordinate with corridors and riser shafts.

The ground floor is slightly different and has a higher floor-to-ceiling height as well as incorporating larger 8.5m-long spans, needed for the bar and reception areas. This floor is topped with a series of 1.5t transfer beams, that support the different column spacings of the floors above.

There is no ground floor slab for the hotel, as the floor is formed with a series of precast planks, that span between the steel columns and ground beams. This method, as opposed to a more traditional ground-bearing slab was chosen as the planks create a void, which was required to accommodate a gas membrane as part of the site’s decontamination programme.

The Hilton Garden Inn Snowdonia is expecting to welcome its first guests at the end of the year.

Phases one and two

The entire Adventure Parc Snowdonia is built on the site of a former aluminium rolling and casting works, which closed in 2007. Before construction of the first phase of works could begin, an extensive clear-up programme was completed on the previously contaminated site.

As well as the construction of a surfing lagoon, the first phase included three steel-framed structures, erected by locally-based EvadX. These consisted of a utility building, a storage hub for wetsuits and surfboards etc., and a restaurant/bar structure.

Phase two included the steel-framed Adrenaline Indoors building that opened last year. The structure required 140t of steel, was designed by Rigby & Partners, and fabricated and erected by BD Structures.

“Delivery of the Adrenaline Indoors steelwork was done during an emergency bridge closure south of Conwy, whereby we had to re-load our 24t steel lots into smaller packages to use a second bridge. No delay was caused to the project through some quick reorganising and re-loading of trailers,” comments BD Structures Managing Director Chris Heys.