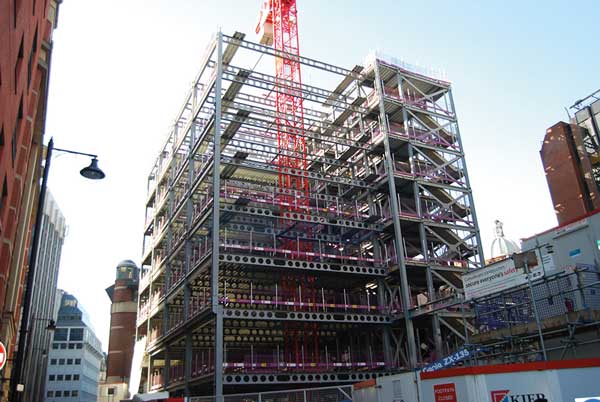 Manchester’s commercial sector has seen record levels of activity in recent years and Eleven York Street is one of the projects set to complete this year. Martin Cooper reports.

A total of 27 schemes, predominantly in the commercial and residential sectors, were completed in 2019 and a further 47 completions are expected this year.

Although these figures are impressive, they are slightly down on the record levels of activity experienced in 2018, according to the latest research from Deloitte.

The company’s 2020 Crane Survey reported that Manchester’s commercial office sector remained most resilient across all UK cities with approximately 190,000m² under construction for a second successive year.

Investment in the central Manchester office market remains high as the city is seen as an ideal location for new and expanding companies, that require a north of England headquarters.

One of Manchester’s city centre commercial schemes due to complete by the end of 2020 is Eleven York Street, an eight-storey building that will offer 7,300m² of floor space. Designed to achieve a BREEAM ‘Excellent’ rating, the structure will have seven office floors, a ground floor accommodating two retail units and a main lobby, as well as a basement offering space for 23 cars. 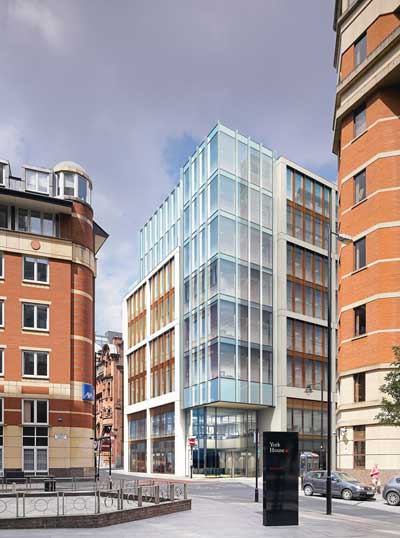 How the latest commercial scheme in Manchester will look 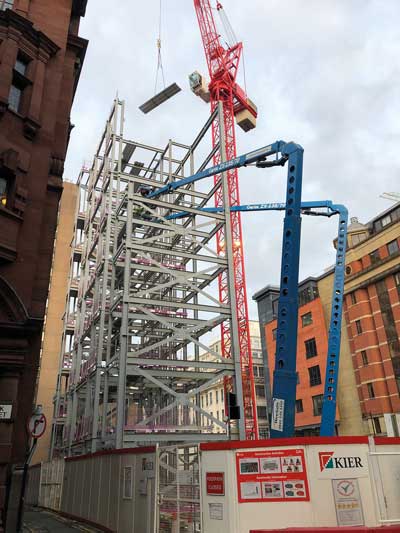 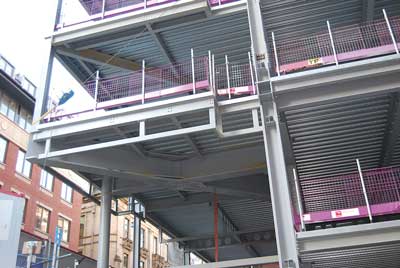 Main contractor Kier started on site during 2018, with the demolition of the previous five-storey concrete-framed building.

Replacing, what had become a very tired-looking structure, the designs for the new build always envisaged a steel-framed building, according to Tier Consult Engineer Robert Harmston.

“The client wanted long span, column-free office space, and this is best achieved using structural steelwork. The material also gives the project team valuable speed of construction, which is always an important consideration on any scheme.”

Once demolition had been completed, the new building’s foundations were installed, which included a contiguous piled wall and a series of CFA piles, installed to a depth of up to 14m.

This then allowed the steelwork programme to kick-off, which required Leach Structural Steelwork to fabricate, supply and erect 890t of steel over a period of 21 weeks.

“Logistics have been one of the main challenges for the project, especially for the delivery of steelwork and other materials,” says Kier Project Manager Lee Williams.

“We are surrounded by a number of narrow and busy streets, which need to be negotiated by our trucks, so any bad parking can cause havoc to our deliveries.”

Unlike many commercial schemes, Eleven York Street has a steel braced core, which accommodates staircases, lifts, risers and toilets. It also provides the building’s main frame with its stability, and was chosen over a more traditional concrete core for commercial reasons.

“It may have been difficult to get a contractor to install a concrete core as there is so much construction work underway in the city,” says Mr Harmston. “Plus, a steel core has programme benefits, whereby the project team didn’t have to wait for a concrete contractor to finish its work before beginning the steel erection as it was all part of the same programme.”

For this reason, the steel braced core was the initial part of the building to be erected. It was installed to its full height and once completed, it then allowed the remainder of the structure to be installed by providing the frame’s stability.

Although centrally-positioned, the core is offset and located along one of the building’s main elevations, thereby creating more valuable floor space.

After the core, Leach Structural Steelwork erected the main steel frame by dividing the structure into two further phases, with each one erected bay-by-bay and to the full height of the building.

Radiating out from the core, each of the floor’s long clear spans are formed by a series of Westok cellular beams, up to 15m in length. The choice of using Westok beams was made because the cellular sections are able to fully integrate the services within their depth, maximising the structure’s floor-to-ceiling heights, while also being economic as they are lighter than traditional UB sections.

The Westok beams were optimised to adhere to the strict 660mm-depth restriction imposed on the floorplate. To facilitate the passage of the services, a cell pattern of 425mm-diameter holes at 600mm centres was provided, along with some discreet wider elongated cells.

Kloeckner Metals UK Westok Design Team Manager John Callanan commented, “We continue to see a steady stream of clear-span commercial office developments in Manchester and Salford, and it was great to work with the project team on this job.”

The building’s design contains just one solitary internal column, located in an area where the span would have been greater than 15m. Without this column, the span would have needed a beam with dimensions much greater than the other beams, and this would have interfered with the structure’s overall floor-to-ceiling heights. For this reason, the decision was taken to allow the one column to invade the otherwise open-plan floorplates.

All of the steelwork has been erected using the project’s one tower crane, and so all individual sections had to be within the crane’s capacity. To this end, the heaviest pieces of steelwork, other than the cellular beams which weigh up to 9t, is a series of transfer plate girders. The heaviest of these is 9.6t and it is positioned close to the core, where the structural loads are deemed to be too great for a cellular beam to support.

There is another 5t plate girder positioned at the underside of the second-floor level that creates a cantilever over the entrance’s double-height space, while a further transfer girder is positioned at sixth floor level to form a set-back in the structure along its northern elevation to form an outdoor maintenance terrace.

Eleven York Street is due to be complete by the end of the year.