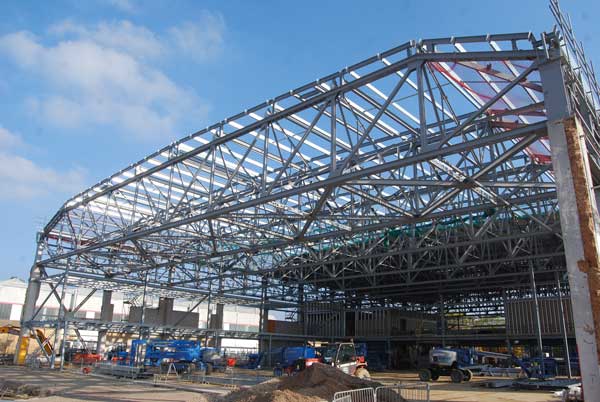 The roof trusses have all been refurbished

Highlighting steelwork’s longevity, a 1930s-built aircraft hangar is being converted into an education and training centre for the aviation industry. Martin Cooper reports.

Said to be the first of its kind in the UK, the facility will support training for up to 500 students and delegates at any one time, including up to 80 degree-level engineering students per year, as well as degree-level and further and higher education courses in airport operations and cabin crew training.

Mark Pendlington, Chairman of New Anglia LEP, one of the project client partners said: “This innovative project is the centre-piece of all our ambitions to make Norwich International Airport a centre of global excellence. The academy will bring a whole new world of opportunities for local students to train and build careers in this exciting and specialist industry. It will be a powerful draw for further inward investment and will give our region a strong competitive advantage over other key European locations.”

Known as Hangar 5, the structure was built in the late 1930s when an RAF airfield was established at Horsham St Faith near Norwich.

The hangar was used throughout the Second World War and was subsequently converted in the post-war period into a light industrial unit when the RAF base was decommissioned and Norwich’s commercial airport created.

Measuring 91.44m-long × 45.72m-wide, the project’s design involves retaining the existing 1930s steel lattice truss roof structure and columns, which are encased in concrete up to a height of 6m, but discarding all the cladding and the hanger doors.

The retained steel structure has been refurbished and the external walls and roof are being re-clad. The roof profile has changed from the original ‘saw tooth’ design to a dual pitch profile, and is clad with a new composite panel roof deck (Kingspan Topdek).

“An extensive survey was carried out and apart from a little bit of rust and a few bolts that needed to be replaced, the original steelwork, especially the roof trusses, was all in excellent condition considering its age,” says RG Carter Senior Contracts Manager Kevin James.

Prior to stripping-back the hangar’s original cladding and roof fabric, the exposed steelwork was all shot-blasted and repainted. This work left the steel in a ‘good-as-new’ condition and revealed the stamp marks showing the steelwork was manufactured at the Middlesbrough Dorman Long works.

To create the new roof profile a series of new steel rafters span the entire width of the hangar. A series of steel stubs were bolted along the length of the top boom of each truss to accept these new rafters. Using one mobile crane positioned alongside the hanger, the new rafters were then lifted into place as complete sections and bolted to the stubs.

The conversion plans divide the hangar into two distinct parts – one half being an ‘Emulation Zone’ housing a live operational Boeing 737, helicopter and workshops for use by aviation students, the other half being ‘The Academy’ with learning accommodation arranged around a central atrium.

Approximately 250t of new structural steelwork, fabricated, supplied and erected by locally-based A C Bacon Engineering is being used for the project, plus a further 60t of cold-rolled sections. As well as the new roof steelwork the company has erected mezzanine levels for the classrooms. 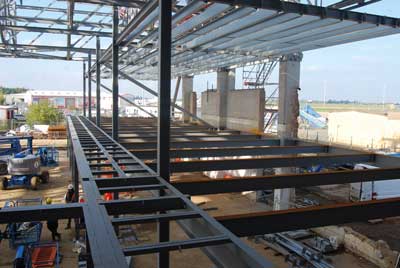 In ‘The Academy’ the steel-framed mezzanines are arranged around a central void/atrium forming two levels of classrooms, ground floor and first floor. Composite metal decking has been used to form the first floor and an internal roof over the classrooms.

The mezzanines are supported by their own new pad foundations as well as being bolted to the existing perimeter columns for extra stability.

“As the perimeter columns are concrete-encased we had to bolt our new steel members to a steel collar that is bolted to and goes around the concrete,” explains A C Bacon Engineering Commercial Director Barry Tipple.

For the classroom floors A C Bacon has also installed cold-rolled steel joists as these were preferred to timber members on this job.

Although the majority of the ‘Emulation Zone’ will accommodate an aircraft, one elevation does contain another new steel mezzanine housing a first floor classroom block that overlooks the maintenance area, with a ground floor workshop area below. On the opposite elevation a further two bays of mezzanine level have been added for more classes.

Some new elevational steelwork has been added to the hangar structure, including new columns to accept the roof’s new profile and window frames along the main elevations. One end of the hangar has also been extended by one bay to allow a Boeing 737 to be accommodated within the structure.

This new western gable end of the hangar has been designed to be demountable so it can be removed approximately once every five years, when the 737 will be replaced with a newer aircraft.

It is expected that KLM will move its existing aviation students teaching facility, currently located elsewhere on the Airport Industrial Estate, into the new facility alongside varied clients from across the aviation industry, nationally and internationally. Also, local training companies will establish a full range of courses making this a truly unique project.

The facility is scheduled to open in a phased programme during the coming months, with the ‘Academy’ half of the building due to be handed over first.