Double truss ready for take off 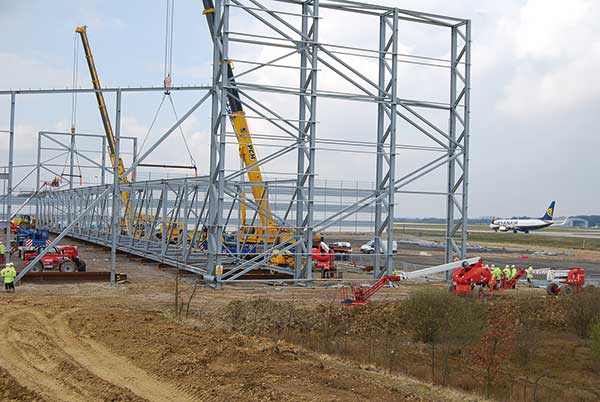 Barrett Steel Buildings has lifted the first of four 125m-long steel trusses on a design and build contract for the roof of a new maintenance hangar at Stansted Airport for Ryanair.

The steel-framed structure is 125m wide and 58m long and will be able to accommodate up to five 737 aircraft.

Chris Heptonstall, Associate Design Director at Barrett Steel Buildings, said: “We designed the roof around the ability to lift it accurately and safely within the very tight build window.”

Two trusses were laced together and lifted as one box girder for the first lift. “We wanted a rigid box so a combined truss weighing more than 100t was erected on staged skids, piece small and lifted into position by two 300t capacity mobile cranes on a contract lift,” he added.

Two further plain trusses will be lifted in the coming weeks, each weighing approximately 50t, and braced back to the rigid box girder. The roof is pre-cambered to take out the dead deflection and all connections are friction grip using TCB’s.

“We chose TCB bolts for their speed of fixing and the surety that the full slip potential was guaranteed,” said Mr Heptonstall.

Working on behalf of main contractor Kier Eastern, Barrett Steel Buildings is scheduled to complete its steelwork package – amounting to 600t – by early June and the hangar will be operational by the end of the year.

A detailed Tekla 3D model of the hangar can be visited at Barrett’s website www.barrettonline.co.uk and going to the 3D model library.