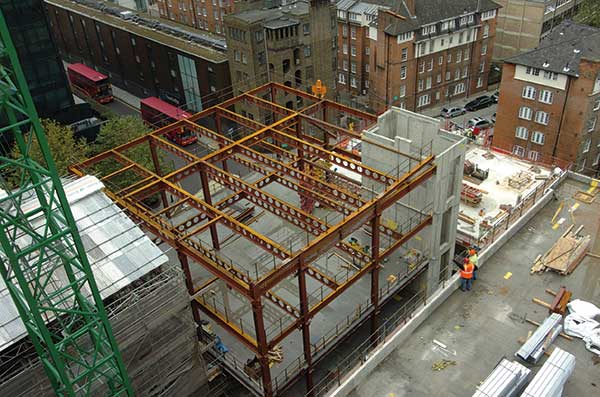 On the site of a former hospital, a prestigious commercial and residential scheme is taking shape with the aid of steel’s speed and lightweight construction.

Next year Unison, the second largest trade union in the UK with over 1.3M members, will be relocating to a new headquarters building on one of the most prominent sites on London’s Euston Road.

Currently occupying a rather tired looking 1970s concrete edifice, only a stone’s throw from its new building, Unison’s aim is to create a state of the art, modern campus-style development on a site previously occupied by University College London Hospitals.

As well as office accommodation, the new site also includes residential buildings consisting of 47 apartments, as well as incorporating a Grade II listed Victorian building – originally built as a specialist hospital for women by the medical pioneer Elizabeth Garrett Anderson, which is being restored. 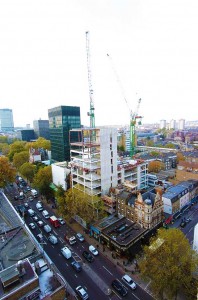 The site is located on the northside of Euston Road, halfway between Euston and Kings Cross railway stations. The scheme maximises the one acre site by linking the retained Victorian element to three new office buildings (known as A1, A2 and A3) via walkways and a central glazed atrium. Three residential blocks are situated towards the back (blocks C, D and E), while a fourth (block F) is located along the eastern boundary facing Chalton Street.

Main contractor BAM started on site during the summer of 2008, completing a demolition phase of the buildings that were later additions to the original 1898 building that has been retained. The listed building has been stripped back to allow structural repairs to be carried out. The old roof has been stripped but the roof tiles salvaged to be relaid onto a new roof stucture. When the renovations are complete, the Victorian building will be incorporated into the new complex with meeting rooms and offices for Unison and a ground floor exhibition celebrating Elizabeth Garrett Anderson.

Steelwork erection began last August, and contractor Graham Wood Structural will eventually install close to 600t of structural steelwork for the project. The three office blocks were erected first as these were easiest to access from the site’s only entry point which is located along the western boundary on Church Way. 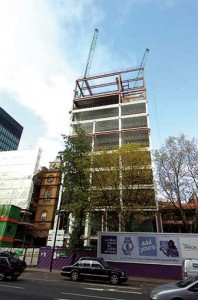 The tallest structure on the site, the nine-storey office block A1, was the first steel part of the project to get underway, followed by the five-storey structures A2 and A3. All of these buildings have been erected around a similar grid pattern featuring 12m long Westok beams for all floors, with stability predominantly derived from concrete cores.

Sequencing played a major role in the steel erection programme, as other trades, most notably the concreting for floor slabs, had to be taken into account. Steel for A1 was erected up to floor five, then the concrete contractor was allowed access to the structure to cast floor slabs, while Graham Wood commenced erecting A2 and then A3 to their topmost levels.

“In this we were able to keep ahead of the concrete team, as once we’d erected A3, we could then go back and erect the final four floors of A1,” explains Pat Whelan, Site Manager for Graham Wood. “The sequencing also had a programming element as erecting the steel frame above five levels would have made it difficult for concrete team to get their equipment into the structure by crane.”

The top floor of block A1 will be utilised as a conference chamber and features a 7.5m high floor height, double that of all the other levels. “Aside from this, the three office structures were fairly straightforward to erect although a lot of coordination was required to make sure the interaction with the precast cladding units was correct,” says Mr Whelan. 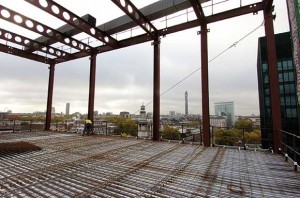 “To distribute the loads being transferred to the Victorian brickwork a concrete spreader beam has been installed along the old building’s eaves which will support part of the atrium’s steelwork,” says Paul Livesey, AKS Ward Operations Director.

Block A3 which abuts the flank wall of the retained building, has a rigid steel frame along the connecting elevation consisting of stiffer beams and columns with extra bracing at basement level. The new steelwork which connects into the brickwork of the Victorian building sits on PTFE pads to allow differential lateral movement.

The steelwork trusses sit on roller bearings connected to the spreader beam preventing lateral thrust being transferred into the old brickwork. Therefore the load bearing brickwork facades will only support vertical loads.
The two final pieces of the steelwork erection jigsaw will see Graham Wood erect residential blocks D and E. Both of these structures had to be sequenced last as they are located on the area previously used as the site’s delivery and lay down area.

A concrete podium covering plant rooms and a small disabled car parking area will occupy much of this area’s available space, with both of the residential buildings sitting on top.

“As a lightweight frame was needed for both of these structures, a steel frame with timber floors was chosen,” adds Mr Livesey. “The car park has a much larger grid pattern which doesn’t match up with the residential structure’s grid, so steel again met the requirements.”

The project is due for completion in October 2010.