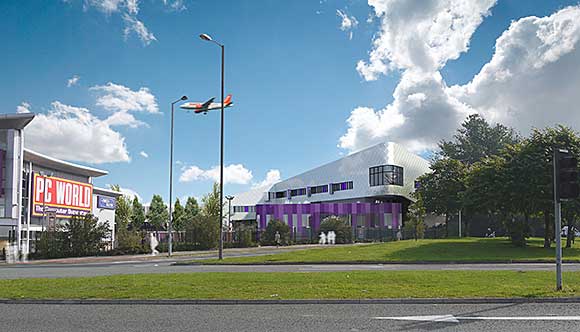 The prominent prow elevation of the Academy

Triangular in plan, a new and iconic steel framed Academy is taking shape in south Liverpool.

Improving students’ educational performance often goes hand in hand with the regeneration of a local community, especially with the construction of a new school.

An example of this is the Enterprise South Liverpool Academy (ESLA), a new landmark educational facility under construction in Garston, Merseyside. The four-storey structure is being built on a prominent site and its architecturally inspiring design, which brings structural steelwork’s qualities to the fore, means the Academy will quickly become a source of pride to students and the local community.

The Academy initially opened in 2010 on two different sites following the closure of two local schools. The new facilities are due for completion in February next year.

The construction project began in July 2011 and the work is taking place on former playing fields belonging to one of the Academy’s campuses. Once the new structures are complete and students have decamped, the old buildings on the site will be demolished by main contractor Lend Lease. This area will then be converted into car parking and student allotments.

Structurally the main part of the new building is a triangular four-storey element featuring a large full height atrium in the middle. This part of the Academy houses the main entrance, social facilities including dining, learning cafe and sixth form area on the ground floor, with classrooms arranged on the levels above. Each of the upper floors feature break out zones, which take the form of curved balconies, arranged along each of the atrium’s three sides. 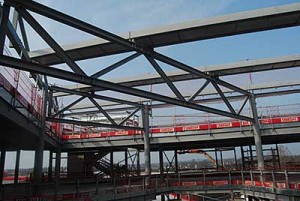 Despite the triangular shape of the main structure the steel grid pattern is still quite regular, which had benefits for the steel erection programme and design. “For economy we managed to keep the grid based around a three sided equilateral triangle that forms the central atrium, with each side split into five bays of 7.65m,” says BDP Project Engineer Andrew Williams.

The wings of each side of the triangle are made up of a classroom bay of 7.7m and a corridor bay of 4.2m, the only exception being around the corners. Two precast lift shafts are located in two of the building’s corners; installed with the precast stairs by The AA Group (TAAG) as it erected the steelwork frame.

The Academy design has taken into account possible future needs of the school and how these needs may alter. “A fair amount of future-proofing has been designed into the project and some classroom partitions could be removed, changing the room’s configuration if the Academy’s needs required bigger teaching spaces,” says Neil Sargent, Lend Lease Project Manager.

Upturned T-sections span the classrooms between the perimeter columns and the internal corridor columns. Running parallel with the precast units, these beams are set at the same depth as the planks, giving a flat soffit within the teaching spaces and so allowing partitions to be easily removed and clear distribution of services.

Forming the atrium void are a series of 22m-high 406mm diameter CHS members. Used for their aesthetic appeal, these columns will remain in full view within the completed building. They were brought to site in two pieces and then bolted together on the ground before being erected as one single piece. For architectural reasons the column’s splice is hidden within the second level floor zone. 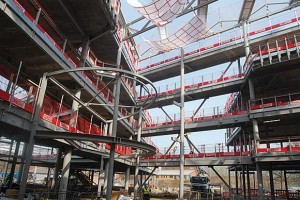 The faith space ‘pod’ sits within a large atrium

As well as social facilities, the ground floor of the atrium also accommodates a dining area and a faith space – the latter being a place that reflects the Academy’s Christian ethos. Circular in plan with a 9m diameter, the steel frame for this pod has been formed with a series of curved beams. The roof to this circular drum structure is sloped so the steel beams to the head of the frame are both curved and slope, requiring double curvature members.

Further upwards in the atrium a series of bolted 2m deep warren trusses span the void. Varying in length (the longest is 30m), they were all brought to site in sections before being assembled on the ground and lifted as one member. The trusses support a series of beams that provide support to a north light glazing system with integrated gutters, which will take full advantage of natural illumination for the central atrium. 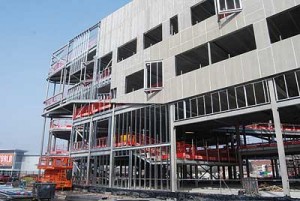 “Although the grid is fairly regular the overall steel frame does have some complex geometry,” says Mr Williams. “Transfer structures are needed where we have large open areas, such as a ground floor drama unit and the main entrance, while there are also some long cantilevers requiring deep beams and backspans.”

One of these cantilevers is located over the Academy’s specialist Enterprise Centre. This is an attached smaller triangular structure with a similar central void to the main building which is attached to one elevation. This area will feature high tech conferencing facilities and will  be open for use to the local community.

The main triangular structure cantilevers 6m away from one large CHS column at third floor level. This column provides support to the Enterprise Centre at levels one and two, and continues up to the underside of the third floor level of the main building which cantilevers out over the Enterprise zone. This overhang creates a second floor outdoor area and design wise it resembles a prow of a ship, which is a nod to Liverpool’s nautical heritage and the nearby River Mersey.

The new Academy also features a large indoor sports hall which sits adjacent to the main structure. It is linked to the Academy via a covered walkway (known as the Agora). Although part of the same large steel frame, the Agora and sports hall are separated from the rest of the structure by a movement joint.

Summing up the project, Sue Emms, BDP Architect Director, says: “In line with the sponsors vision, we wanted to create a new Academy that contributes to the local neighbourhood by creating a new community beacon and a symbol of regeneration.

“The building has been conceived as a ‘ribbon’, clad in shiny aluminium shingles. This form provides a visual presence to the entry vista and rises up to the main body of the building into a highly visible ‘prow’ before wrapping around and down to enclose the main body of learning spaces.”