Arts and education boost for Orkney 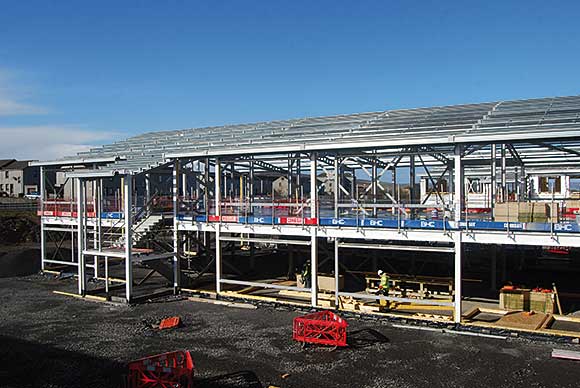 Structural steelwork is playing a major role in the construction of a new grammar school and theatre in Kirkwall. Martin Cooper reports from the Orkney Islands. 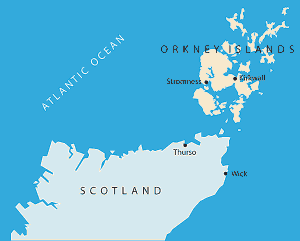 A multi-million pound schools investment programme is currently underway on the Orkney Islands, a scheme making full use of structural steelwork’s inherent advantages for its main buildings.

Overall the project will see main contractor Morrison Construction deliver a new grammar school and arts centre, a halls of residence, and a swimming pool and squash courts, all in Kirkwall, as well as a new primary school in Stromness (see story below).

With a population of just over 8,000, Kirkwall is the biggest town and capital of Orkney. It is a centre of education and a focus for the local arts scene, both of which will be accommodated within the new Kirkwall Grammar School (KGS), the largest component of the programme.

Under construction on the existing KGS site, on land previously occupied by playing fields, the new school has been designed to create a distinctive focal point, not just for pupils but for the local community as a whole. 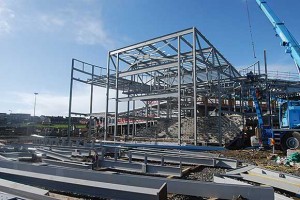 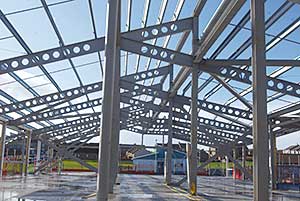 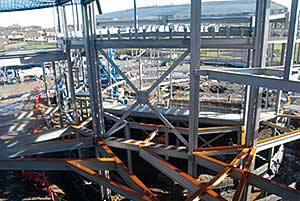 To this end the school structure includes, within its overall footprint, the 350 seat Orkney Arts Theatre. This will replace an existing theatre and has been designed as a public performance venue as well as a facility for pupils to use during school hours. For security reasons, the design of the theatre and its surrounding rooms incorporates a ‘locked down’ element to allow any outside users access without compromising the privacy of other areas of the school.

The KGS project comprises of one large building consisting of three teaching wings connected by an interlinking curved ‘street’ – which also accommodates social and dining spaces – with the oval shaped Arts Theatre located at the head.

Providing 15,000m² of floor space, the building is large and one of the biggest structures in Kirkwall. It has a curving and irregular shape and so movement joints have been placed at strategic points to break up the mass. There are five in total, one each where the wings join the main block, one running straight through the middle of the main block, and finally one isolating the theatre.

Designed as a pin jointed steel frame, cross bracing, located in partition walls, cores and risers, provides all of the structural stability.

“Much of the steelwork is quite complex with a lot of curved members in the theatre,” explains David Custer, Morrison Construction Design Manager. “However, even though we’ve experienced some extreme conditions, especially the windy weather last December, the steel erection remained on target and was completed during March.”

As well as the relative ease and speed of construction, a number of other factors were in steelwork’s favour when it came to the decision to choose the framing material for KGS.

“We reviewed all materials but went with steel as deliveries would be easier and construction would be quicker. The steelwork is prefabricated and just has to be lifted and bolted into place, while the use of cellform beams has allowed us to keep the weight of the frame down which in turn kept costs down,”  says Adam Lauchlan, A.F. Cruden Associates’ Project Engineer.

“Initially the project’s cores were to be concrete, but we changed these to steel framed as it was cheaper and allowed us somewhere to place bracing,” he adds.

Steelwork contractor BHC started on site last November and by arranging the job into six phases, it was able to work its way down the structure, in a sequential manner allowing the  follow-on trades to get started on areas where the steelwork had been completed and the metal decking and precast stairs installed.

Each phase contains a core and plenty of cross bracing, which meant that as each area was erected it was immediately self supporting and stable. This was useful considering the windy conditions the frame had to endure, and was another reason why steel proved to be the right choice. Shuttering to form an irregular shaped concrete structure would have been more expensive and may not have fared so well in the Orkney conditions.

The erection sequence began with the sports hall and BHC then worked its way down the structure completing the three wings and the main teaching block and atrium, before  finishing off with the theatre.

“The entire shape of the school presented a challenge as the grid changes regularly, but the final sector – the theatre – was the most complex requiring a thousand individual steel pieces,” comments BHC Project Manager Eddie Brown.

The oval shape of the theatre required a number of curved beams to be supplied to the project. These members not only form the curved perimeter of the venue, but they were also used to construct two-storeys of classrooms that wrap around a portion of the theatre.

The complexity of the steel frame is at its greatest where the theatre joins the main school building. Here a large entrance foyer, which connects into the main central atrium, has curved members adjoining a straighter line of steel columns and beams.

Forming the open plan column free space of the theatre are two 17m-long trusses, positioned on either of what will become the main stage. These large steel sections were brought to site fully assembled and erected during one weekend, after getting a police escort through Kirkwall’s narrow streets from the ferry terminal.

Working on the Orkney Islands means all of the project’s materials have to be transported from the mainland, with the steel arriving by ship from Aberdeen. BHC had to limit each load to 25t, with the longest individual load being 24m-long.

“We generally allowed four days for each delivery to arrive after leaving our yard in South Lanarkshire,” says Mr Brown.
Two locally supplied mobile cranes were utilised during the first stages of the job, when two erection gangs were employed. But as the work came to end and only the theatre remained to be erected, just one 200t capacity crane needed to remain on site.

Elsewhere on the project steelwork continues to follow an irregular grid pattern. Each of the three two-storey teaching wings for instance, are different lengths and accommodate classrooms that are based around a 7.1m grid but get slightly smaller the further away they are from the main building. This design feature creates more circulation and breakout space and is formed by the central dividing corridors in each wing splaying outwards.

The main feature of the school is the centrally positioned and naturally lit three-storey high ‘street’ or atrium. Overlooked by corridors from the adjoining three-storey teaching areas, the ‘street’ is connected to the dining hall and a dance studio. Both of these areas can opened up into larger spaces by using moveable partitions. Spans across the ‘street’ are a maximum of 24m, and have been formed by a series of cellular beams.

Aiming for a BREEAM ‘Excellent’ rating, the new KGS school is scheduled to be operational by spring 2013. This will then allow the existing buildings to be demolished, creating space for the school’s new playing fields. 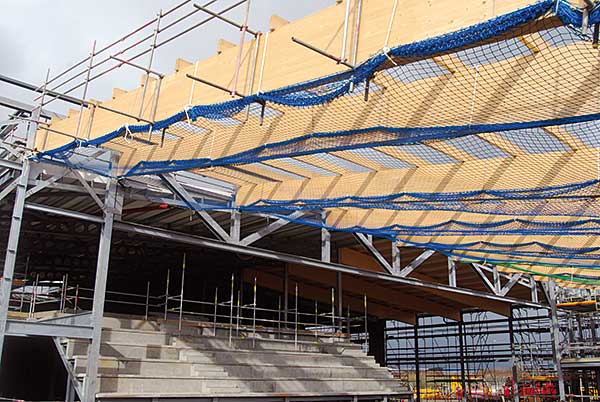 In at the deep end

Work is also currently progressing on the steel framed extension to Kirkwall’s Pickaquoy Leisure Centre. The new build will house a six lane 25m-long swimming pool, a leisure pool, steam room and squash courts with a viewing gallery.
One 32m-long spliced steel truss, weighing 14t, forms the central spine of the extension, supported by two main columns, one at each end. Aside from this, the extension is a braced steel frame, with the main truss connected to a series glulam beams which span the pool. Terraced seating overlooks the main pool, formed with precast steps supported on steel rakers.

Cellular beams have been used for economic reasons to create the open areas of the squash courts. Behind these courts the extension connects into the existing building’s steel frame. Interestingly, Morrison Construction also built the first phase of the Pickaquoy Centre in the late 1990s.

Recently the predominantly timber framed Stromness Primary School was completed, while the steel framed Papdale Halls of Residence, part of the programme, has just entered the preliminary ground works stage.