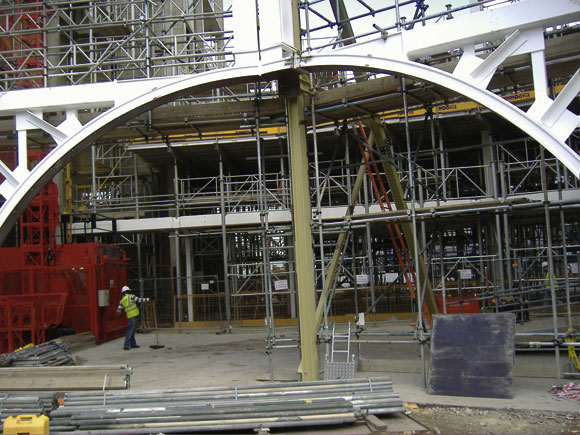 Hidden behind a mathematically patterned façade a new art and design college has made use of structural steelwork to create two interconnected atria. Martin Cooper reports.

Work has been completed on the Ravensbourne College of Design and Communication situated on the north Greenwich peninsula in south London. The 17,000m² structure, which provides specialist teaching facilities for 1,400 students as well as 140 members of staff, has been designed to stimulate the local environment and the working practices of future creative professionals.

The building forms a central element of the area’s on-going regeneration and is opposite the O2 Arena (formerly Millennium Dome). With such as prominent position it is of little surprise that Foreign Office Architects (FOA) have designed a building with a striking façade and elaborate innards.

Designed to achieve a BREEAM ‘Excellent’ rating, the college has been constructed with a number of interesting internal steel elements. It is the exterior however that first grabs the attention of the visitor or casual passer-by. The façade features 28,000 anodised aluminium tiles which are wrapped around the entire structure. They are made up of Penrose tiling, a complex but non-repetitive pattern invented by Sir Roger Penrose, an Oxford university professor. 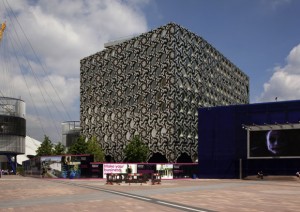 This abstract pattern has allowed the design team to build seven different types of windows out of only three different tiles.

The building is roughly rectangular with a slight crank on plan down the middle. Internally the building is then divided into three main sectors, with both the east and west wings constructed with concrete, while in the middle, straddling the crank, there is a central wedge constructed with steel and precast planks. The central wedge or hub, remains largely exposed leaving the steelwork as an architectural feature.

FOA says the main theory in the design of the building was to produce a structure which would encourage collaboration between the different disciplines and practitioners within the College. This will be achieved by structuring the building around a system of two interconnected atria within the hub, each piercing through three levels of the structure.

The atria have been systematically attached to the external façade in order not only to use them as ventilation spaces, but also to connect visually to the core of the building. The north atrium extends upwards from ground floor level to third floor, while the adjacent southern atrium sits above a lecture theatre and media centre and consequently begins at third floor level, extending upwards to the roof. 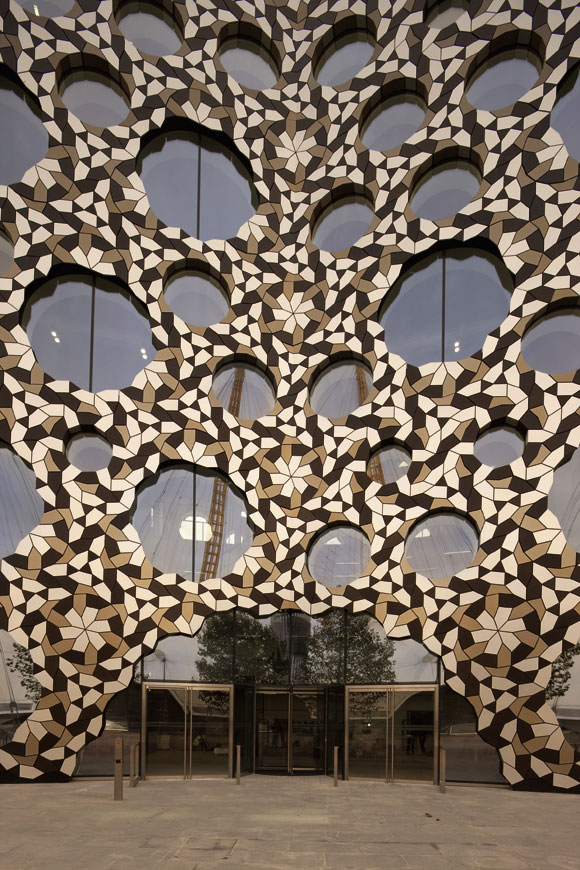 Close up on the Penrose tiling

To form the accommodation space below the southern atrium a large storey-high truss was installed. Measuring 5m deep × 16m-long, the truss houses a media centre and a plant room within its depth, while the bottom cord forms the roof of the ground floor column free lecture theatre.

The warren-type truss was fabricated offsite by steelwork contractor Billington Structures. It was delivered in two halves – split horizontally – with each section weighing approximately 10t.

“Splitting it horizontally was necessary as there could not be a splice in the exposed main chords. The bolted connections were therefore at mid depth, which kept forces and the number of connections to a minimum,” explains Steve Williams, Billington Structures Project Manager.

A large two-storey high Vierendeel truss was also installed to form the roof of the northern atrium as well as the two levels of workspace that sit above it on levels four and five. This truss was brought to site in individual pieces and then erected in sequence, with the girders for the fourth and fifth floors (which are supported on two large columns founded at ground floor level). Once site assembled and erected it was followed by the vertical members and the roof beams.

Connecting both trusses back to the central hub’s perimeter steelwork are a number of Fabsec beams, chosen for the aesthetic appearance as they have been left fully exposed. Fabsec cellular beams have also been used for the roof above the southern atrium, again for the same architectural reasons.

Interestingly, floor levels at either end of the building are offset in order to distinguish each wing from the other. A series of steel links and ramps span the atria, linking the wings and also realigning the differing floor levels.

“On this project the links spanning the atria had to be installed along with the main steelwork,” says Mr Williams. “We had to coordinate with the concrete contractor as this part of the project has cast in-situ floors, as opposed to precast flooring, which has been used on the remainder of the project.” 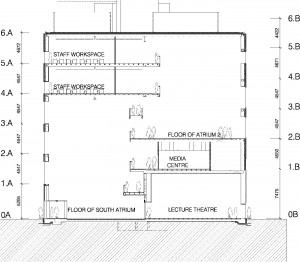 The steelwork incorporates two atria which begin at different levels

Situated at the apex of the structure’s crank is the building’s main entrance which leads directly into the central hub area. An arched doorway – 5.3m high and 12m at its widest – has been formed using bespoke hollow sections.

Because of its location this was the first steelwork to be erected by Billington Structures, with the rest of the steelwork then springing off of this part.

Two large columns, supporting the Vierendeel truss have been installed on top of the arch. Because of the excessive loads from these columns, and the fact that the arch has a crank on plan which makes it want to twist, large hollow sections were needed for their torsional resistance.

No off-the-shelf hollow sections, large enough for this job, were available so Billington fabricated its own 400 x 200 RHS. Using 35mm thick plate, the steel was either profiled to the curved form or pre-curved before being welded into the required sections.

Steelwork gets to the core of the project

Each of the College’s two wings has a central concrete core containing one lift shaft and an emergency staircase. Billington Structures installed the steel staircases to the inside of each core after they were cast.

The completed cores initially had a steel framing system drilled and then fixed to their inner walls to accept the steel staircases.

“We were able to get a scissor lift into the cores at first and this helped us install the framing for the initial 20m,” explains Mr Williams. “The rest of the framing was then installed from the previous completed section of staircase.”

Pre-assembled staircase units for each floor level were then lowered into the cores by tower crane.