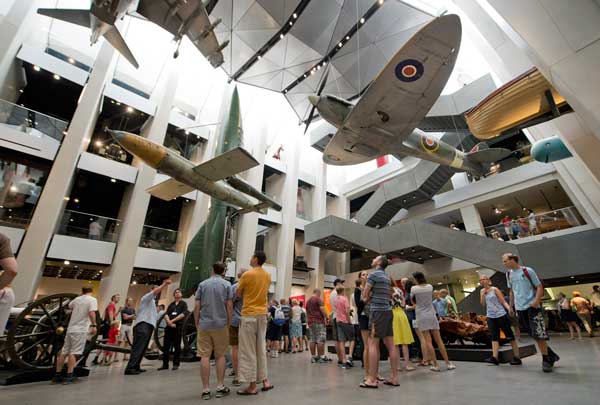 To mark the start of the Centenary of the First World War – a transformed Imperial War Museum re-opened with stunning new steel-framed galleries and atrium.

FACT FILE
Architect: Foster + Partners
Structural engineer: BuroHappold Engineering
Steelwork contractor: Bourne Steel Ltd
Main contractor: Lend Lease
Client: The Trustees of the Imperial War MuseumStructural steelwork has been used to reinvigorate the world famous Imperial War Museum (IWM), with the construction of new galleries and an atrium adding extra space to exhibit some of its largest items such as a Spitfire, rockets, tanks and other military hardware.

The refurbishment project required the cutting-out and removal of existing concrete floors and steelwork to create an extended atrium space for large hanging exhibits.

All materials removed from the building and all new materials brought to site had to pass through a constrained entrance way, which meant they were often man-handled into place as mechanical means was not possible.

The access way into the main atrium was further complicated by having a 90 degree turn from the access way between the existing concrete columns and the atrium space. This limited the new steelwork to a maximum length of approximately 8m.

“I’m quietly proud of what our team has achieved on this project,” says Bourne Steel Construction Director Charlie Rowell. “There were extremely tight access and construction constraints and a tight programme, but we built a new five-storey structure within and connecting to an existing five-storey atrium, with bespoke finishes and with the client in residence throughout.” 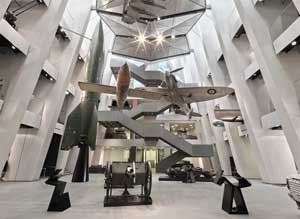 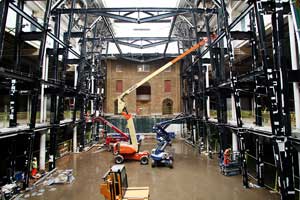 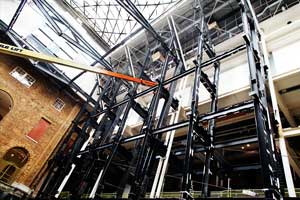 Trusses, stair frames, link bridges and long columns all had to be spliced to get them into the building, which also meant substantial temporary support frames were needed to erect the individual pieces.

To add to the challenges, the project commenced before the museum underwent a temporary closure period to allow for the most invasive works to be completed. Therefore, removal of the existing hanging exhibits from the barrel vault roof and the survey of the existing structure had to be carried out simultaneously with night-time construction work.

A total of 20 tapered Vierendeel columns connect back to the existing steel frame, holding up a high level flying steel exhibition gallery including trusses and floor beams, above which sits the magnificent retained steel barrel vault roof structure.

These new intricate column structures now support the precast cladding, as well as the hung exhibits, to complete a crisp structural elevation to the atrium space.

Floating steel staircases, a corridor structure in the existing loading bay and two new lift structures with a triangular truss link bridge to the high level flying gallery complete the 370t of new structural steelwork on this five-storey internal structure.

The majority of the steelwork was finished with intumescent paint, with areas that are visible in the final condition being matched to the finish of the existing steelwork.

The feature stair structure up to the link bridge was finished with a hot zinc spray sealed with a renaissance wax to the underside of the trusses.

On the high level flying steel ‘Roof Terrace’, there are 12 specialist lifting lugs welded to the underside of the trusses and beams to support the aircraft hung from the flying gallery.

“The use of steel was necessary to achieve the required spans and the structural depth for the cantilevered stair,” says Foster + Partners Senior Partner Michael Jones.

“One of the advantages that steel offered was the possibility for prefabrication and quick installation, allowing for a tight construction timetable – the Museum was able to reopen to the public in time to commemorate the centenary of the start of the First World War.”

The erection of the high level flying steel required a load transfer operation to remove the existing columns supporting the barrel vault glazed end gable which was to be supported by the high level flying steel truss. The barrel vault glazing remained in place throughout the construction, so there could be no movement of the existing structure during the load transfer.

Due to the tight confines of the atrium area, the steel construction process had to be co-ordinated with numerous other trades to enable the final structure to come together.

“Success was made possible by careful planning and co-ordination from day one with the design team and Lend Lease,” adds Mr Rowell.

Angular and robust structures frame new galleries and support war machines in a cathedral-like space. Steel construction uniquely allowed constraints of access and time to be well answered, sum up the judges.