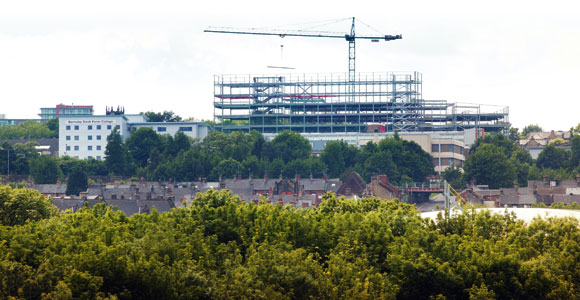 The college sits atop a prominent Barnsley town centre ridge

A steel frame has proven to be the answer for a multi-use building where natural ventilation and thermal mass needed to be incorporated in order to reduce running costs and strengthen the scheme’s sustainable credentials.

On a prominent town centre hilltop, a new landmark educational establishment is taking shape in Barnsley. Consisting of two new blocks joined by a five-storey central atrium, Barnsley College is in the midst of a multi-million pound redevelopment programme.

Combining several campuses onto one site, the project will create one of the town’s largest buildings and one which has scored highly for sustainability. For example, with close proximity to Barnsley’s transport interchange, the college will increase accessibility and encourage the use of public transport.

For all its prominence and importance to the town, the project very nearly stalled last year. Demolition of the site’s old college buildings had already been completed when questions were raised over funding overspend by the Learning and Skills Council (LSC). With a large portion of its premises consisting of a pile of rubble, Barnsley College could have been in quite a ‘mess’. 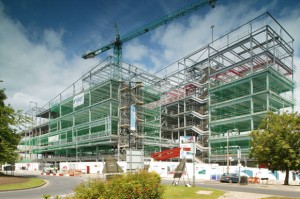 Long internal spans give the building flexibility for the future

“Our local MPs – Jeff Ennis, Eric Illsley and Michael Clapham – raised our plight a number of times in Parliament and called on the Prime Minister to directly intervene,” explains Andrew Fairest, Barnsley College Director of New Build. “After this sustained campaign the project again got the go-ahead provided costs could be reduced.”

A lot of value engineering was then conducted to make sure the project got back on track and was able to meet its new cost criteria. Using steelwork as the main frame material was already part of the design and would ultimately help with a quicker construction programme.

Reducing waste by recycling demolition debris for reuse as a piling mat, using off-site construction wherever possible, altering internal finishes and using different cladding systems than previously specified all helped to bring costs down and kept the project on schedule to achieve its desired BREEAM ‘Very Good’ rating.

Construction work on the college’s new build began again in earnest last September and once the piling was complete and the concrete slab installed, steelwork erection was able to commence in February.

Adjacent to the construction site, Barnsley College’s remaining buildings are still in use by students. This close proximity to a ‘live’ educational establishment has presented one of the main challenges to the project team.

“The occupied college buildings are only six feet away from our site,” says Mike Kershaw, Miller Construction Senior Project Manager. “We’ve had to make quite a few allowances for this, such as keeping dust and noise down to a minimum by erecting a barrier around the site.”

Continual liaison between the contractor and the college has helped keep everyone informed about the project, which in turn has allowed the college to plan ahead for its exams and move some to buildings or classrooms away from the construction site. 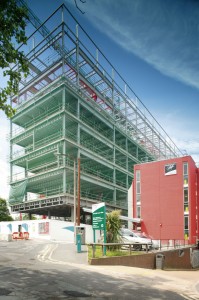 Having a construction site on the doorstep has in fact been beneficial to a number of students, as one of the subjects taught at Barnsley College is construction trades. Some students have gained invaluable experience and have even been taken on by Miller as apprentices for the project.

Another challenge has been the fact that the site is very confined, hemmed in by roads on three sides and the existing college along the fourth boundary. Getting materials onto site has been difficult and to make this easier Miller has been allowed to create a lay-by for delivery trucks along one side of the site, taking over a portion of the highway in the process.

The initial steelwork erection began with the main seven-storey block, which is known as the Primary Learning Zone (PLZ). The larger of the two blocks, this building nearly abuts the existing college and steel was lifted directly from trailers onto the site with two mobile cranes doing the erection work.

Using mobile cranes to erect steelwork continued until the PLZ’s third floor level was reached, when the metal decking and concrete floors were installed.  This then allowed steelwork contractor Barrett Steel Buildings to run its cherrypickers on the cast concrete deck on the third floor. The steel erection for the upper four levels was then completed with the on-site tower crane.

Erected with Westok cellular beams, the PLZ features long 14m internal spans on most of its floors. “This configuration provides the college with flexibility, allowing the classroom format to be altered in the future as there are no internal columns,” says Chris Heptonstall, Associate Director (Design) Project for Barrett Steel Buildings. “The other block, the five-storey Main Teaching Block (MTB) was then erected, using only a mix of cherrypickers and mobile cranes.”

Comprising of a more traditional classroom layout, the MTB has been constructed around a 8m x 8m grid. Both blocks – although linked by the central atrium – are structurally independent and with no concrete cores to tie into, the steelwork’s stability is derived from bracing positioned in partition walls and stairwells.

To allow follow-on trades access to the two erected blocks, Barrett Steel stopped its erection programme during July. The plan is to return to site during September, to complete the adjoining atrium infill steelwork. 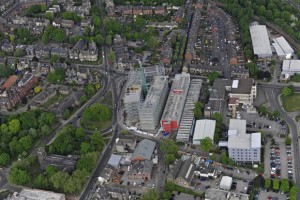 Sustainability has played a key role in this town centre project

There are 12 link bridges spanning the atrium, these were erected as the MTB was going up. However, a first floor balcony, along the MTB’s atrium façade, as well as a circular coffee shop near the atrium’s entrance, could not have been erected during the initial programme.

“The space between the two blocks is currently being used for materials and access for other trades. Earlier erection of the coffee shop would have eaten up valuable site space, so it made sense to programme-in a return later in the schedule,” says Mr Heptonstall. Barnsley College’s new teaching blocks are scheduled to be completed in time for the autumn 2011 term.