A study in steel efficiency 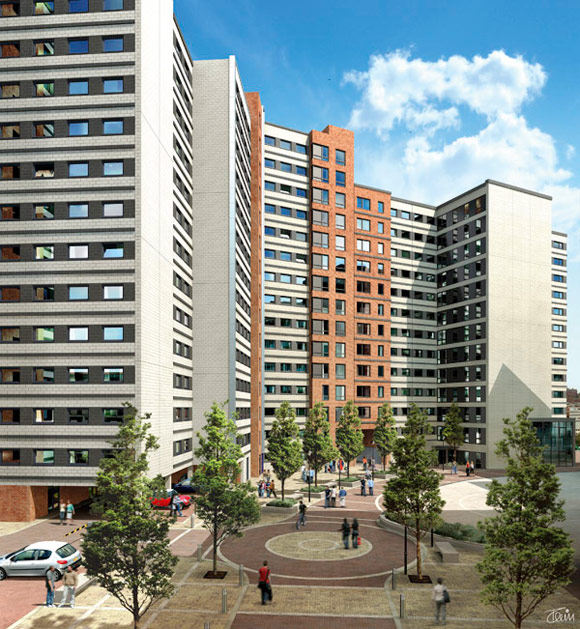 A new landmark taking shape in double quick time on the skyline of Leeds will provide high quality accommodation for almost 1000 students. David Fowler brings back the lessons from site.

The 14-storey Leeds Plaza is being developed by The UNITE Group plc (UNITE), the UK’s leading accommodation and hospitality company, which specialises in developing and managing affordable accommodation for students and key workers such as NHS staff.

The first phase, due for completion this July, will provide flats for 963 students from the city’s two universities, with study/bedrooms grouped in clusters of three, four or five around a common kitchen/dining room.

WSP provided a scheme design in both steel and concrete. The client went for the the steel frame with composite metal deck floors, because of speed of construction, says Project Architect Brian Carr.

“You can get the frame up very quickly and the floors in, and then work on several floors at once, whereas with concrete you have to build sequentially from the bottom,” says Mr Carr.

Mifflin erected the steel frame, under a tight programme, in 30 weeks from last February.

The inner city site, on Clay Pitt Lane adjacent to Leeds Metropolitan University, is bounded on one side by the inner ring road. It was formerly a car park serving offices of retailer Next. As part of the project UNITE is providing Next with a new multi-storey car park on a smaller site nearby.

The tightly constrained site meant there was little room for storing materials. Mast climbing hoists have been used extensively for lifting materials to the floor where needed.

The frame is fairly straightforward with a layout which repeats from floor to floor. It is based on a 6m grid except for a central 8m spine area. Floor to ceiling height is 2.4m everywhere except the ground floor, which houses a management suite, common rooms, a gym and a laundry and has ceilings 0.5m higher than elsewhere.

For a student dwelling, providing a high standard of sound insulation between flats was arguably even more important than in most residential buildings.

Carey Jones built on the experience it had gained on an earlier project. “As a practice we’d done a similar scheme in Leeds around two years ago and we’d done quite a lot of research,” says Mr Carr. WSP’s own acoustic expert also provided assistance.

“We had a very strict regime on site with details checked regularly,” he adds. “While we can design details to work, they have to be built properly to be effective.”

Two series of tests on  finished flats since November have confirmed that the Building Regulations requirements have been complied with.

Another consideration was external noise, at least on the elevation of the building which fronts on to the inner ring road. Here fairly hefty double glazing, with a 10mm external pane, was specified to keep traffic noise out.

The project’s current status is that the frame and roof are complete, and internal fitout – internal partitions, doors, and bathrooms – is about halfway through. Dry lining on metal studwork is being used throughout internally. Apart from some blockwork on the ground floor, no wet trades are being used inside the building. Brickwork and masonry is, however, being used to clad the outside of the building.

Each study/bedroom will have a small en-suite bathroom containing a shower, WC and washbasin. These are being supplied by as prefabricated pods complete with plumbing, at the rate of 80 on each floor. “They were lifted into place very easily by tower crane,” says Mr Carr.

Each room will also have a computer desk and broadband internet connection, vital equipment for today’s student.

Progress is currently on track to allow a phased, floor-by-floor handover to start in May, 13 weeks before the final completion date of July, ready for the first occupants to arrive for the new academic year in September..

With a second phase to provide homes for another 350-400 students on the drawing board, the Plaza is set to become a landmark. “It will be a major focal point on the way  into Leeds from the north,” says Mr Carr.

Perhaps more importantly for its new residents, Leeds Plaza promises to be a world away from the terraced housing of student accommodation folklore.