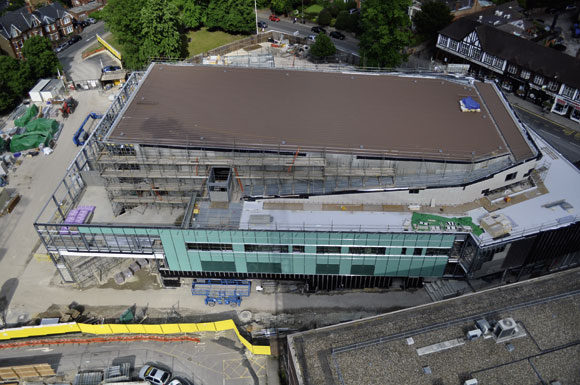 One of the UK’s best known provincial concert venues is being rebuilt and will open its doors again next year. Martin Cooper reports from Guildford’s rock in a glass box.

Built in 1962, Guildford Civic Hall had an unrivalled reputation in Surrey for hosting top acts from the world of entertainment. Comedians such as Jack Dee, Jo Brand and even the idiosyncratic Ken Dodd have graced the venue, while the list of rock bands to have played here over the years includes The Rolling Stones, David Bowie, Eric Clapton, The Clash, The Buzzcocks and local boys The Stranglers.

With such an impressive status on the performance circuit it was a sad day for the town when the venue closed down in 2004. However, after a few years of uncertainty a new entertainment venue is rising up on the same town centre spot, a structure that will not only replace the old civic hall but will offer much more.

Several different plans had been put forward to replace the venue at various locations around Guildford, but the local authority finally reverted to its original proposal to keep the Civic on its current site. Demolition work was carried out last year and main contractor Willmott Dixon is now working towards a handover date of July 2011, with opening pencilled in for October 2011. 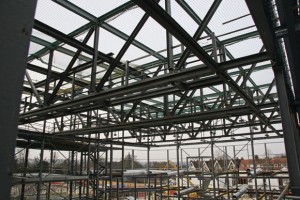 The new development will host a mixed programme of rock concerts, classical music and theatre, and will provide an impressive 1,700 capacity (combined seating and standing) auditorium, a 150 capacity studio theatre, seminar and conference rooms, foyers with bars and a cafe, catering areas and full back of house concert hall facilities.

Architect Austin Smith Lord has successfully resolved a number of key design challenges, notably: accommodating this improved facility and the new structure within the existing site footprint; not compromising the building’s relationship to an adjacent open space, and ensuring the main auditorium caters for a variety of events.

To this end, the architectural concept has been dubbed ‘a rock in a glass box’ as the central portion of structure, containing the auditorium, is a braced box supporting a perimeter slab and post structure with the façades braced back into the centre. The outer sector features fully glazed elevations to the entrances and foyer using varying grades of green tinted and clear glass. This ensures that association with the nearby landscaped grounds is maintained, while the glass box concept allows people to see into the building and view much of the exposed steelwork around the foyer areas.

The requirements of the differing events planned for the venue have been achieved with the design of some interesting features within the central braced box. This steel-framed inner box incorporates a gallery of raked permanent seating above a section of retractable stalls/seating.

“This together with an orchestra pit with a hydraulically lifting platform, allows the auditorium to be configured for a fully seated classical music audience with a 1,000 capacity, or with the platform up and no orchestra pit and the retractable seats tucked away, a full rock concert capacity of 1,700,” says James Murphy, Willmott Dixon Construction Manager. 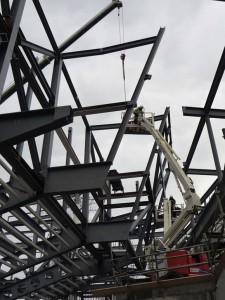 The orchestra pit platform also has a third mode, whereby it can be raised up to form an extended stage for large show productions.

The different acoustic requirements for each event will be resolved by the installation of an Electro Acoustic Enhancement system, which will adjust the reverberation levels to suit every occasion to an optimum level.

Value engineering has also played a major part in the final design of the building. A steel frame was selected as the primary structural material for economic reasons as well as its speed of erection. Steel offers a lightweight solution – good for long span roof and rear auditorium trusses – and also helped minimise foundation sizes and consequently excavation quantities.

One of the main value engineering exercises was the addition of two concrete filled 450mm diameter CHS columns into the steel frame scheme. The two large steel members were introduced to support a cantilever formed by the raked seating at the back of the auditorium which forms a two level column free area for bars and circulation passageways.

“The two 15m high columns reduced the cantilever from 16m down to just 4m and produced a 50t saving in the steel frame,” explains Stephen Warnock, Scott Wilson Associate. “As the cantilever was smaller it was also quicker to erect as no temporary propping was required.”

With no temporary props needed during the steelwork erection programme, there was the added benefit of the site being freed up quicker and earlier for the follow-on trades. This then had the knock-on effect that the construction programme was speedier.

The shortened cantilever was the first area of steelwork to be erected and supported off of the two large CHS columns is a raking truss which supports the second floor of the auditorium. Adjacent to this are a series of tapered Westok beams (1m deep descending to 800mm deep) which support the auditorium’s balcony seating.

The most challenging steelwork elements of the project are the eight 22m-long trusses which form the auditorium roof. The trusses have lateral restraint beams, lighting rig support beams and tubular bracing members. The lighting bridges are integral with the trusses, supported on the rear edge by the bottom chord of the truss, and suspended from high level beams on the front edge.

The trusses have varying depths as they help form one part of the building’s two-part sloping roof. The main auditorium’s roof slopes downwards, from the main entrance and raking seating area, towards the stage. Adjacent to this, the outer façades slope in the opposite direction. “There is some extremely tricky geometry connected to the roof design,” muses Mr Warnock.

Because of the roof trusses’ length, steelwork contractor D A Green & Sons brought them to site in sections. They were then assembled on site before being lifted into position by mobile crane.

For the outer zone of the structure, the floor to ceiling height is limited, due to planning restrictions. In order to minimise structural thickness, the floors are of a Corus Slimdek construction, a composite metal decking comprising ComFlor 225 and ASBs.

When complete next year, the new venue will be run, for the Council, by a commercial external operator partner. The result of a tendering process to decide who this will be is to be announced shortly. 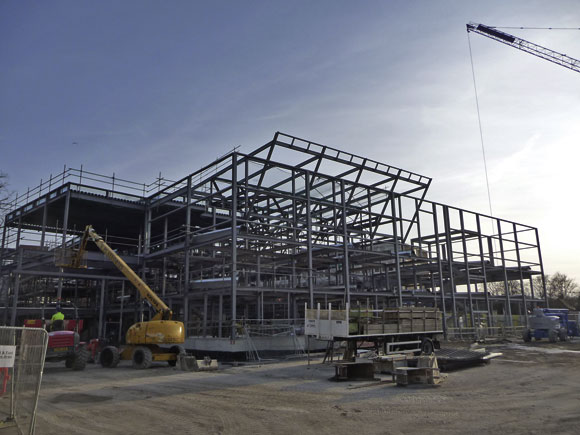 Guildford’s civic auditorium has been awarded a BREEAM “Excellent” rating, the second highest environmental rating available to a project. The building achieved a score of 74%, beating the BREEAM “Excellent” threshold of 70%. The new venue also scored 90% of the available credits for management and water, and 96.5% for energy and transport. Norman King, Director at Austin Smith Lord, said: “The design team has worked closely with Willmott Dixon and with Guildford council to achieve this “Excellent” BREEAM rating using the most economical and low-maintenance options. We have successfully avoided expensive bolt-on features and used natural ventilation, improved insulation with increased air tightness, careful selection of materials and provided a biomass boiler to assist in achieving our objective.”