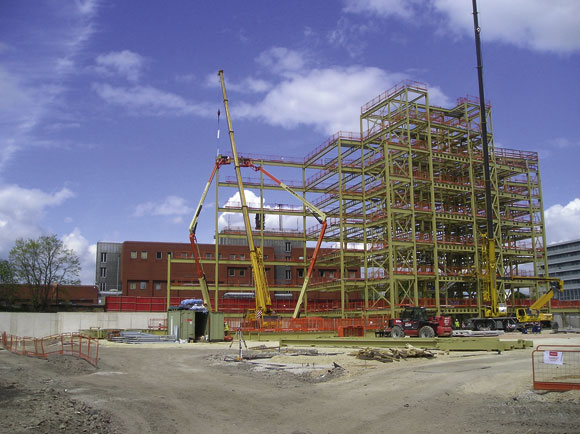 A new steel framed office for Rotherham council is part of the first phase of the South Yorkshire town’s wide ranging regeneration plans.

Big plans are afoot for the centre of Rotherham as a large scale regeneration project has begun to breathe new life into a previously underused former industrial area. Known as Rotherham Renaissance, new high quality retail, leisure, office, residential and public space schemes are planned for a site which sits adjacent to the existing town centre and the River Don.

One of the most significant projects to get under way is an impressive new steel framed civic centre for Rotherham Metropolitan Borough Council. Offering approximately 16,000m² of floor space, the office consists of three blocks that are interlinked at one end by a large glazed atrium.

Protruding outwards from the atrium, the blocks have four, five and six storeys respectively, and are also linked via a basement car park and plant area that covers the structure’s entire footprint. 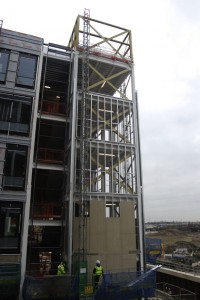 Cross bracing has been added to the cores for structural stability

With aspirations to achieve a BREEAM ‘Excellent’ rating, a number of sustainable elements have been included in the programme. These include ground source heat pumps, provision for a future biomass boiler and using as many local contractors and materials as possible.

This local policy also included the choice of steelwork contractor, in this case Billington Structures, which has fabricated, supplied and erected all steelwork for the job as well as installing the metal decking.

“The building is playing a leading role in the town’s regeneration and when complete it will have an exemplary carbon footprint rating.”

Constructing a steel framed building on a site which was previously the home of a large iron foundry gives the project some symmetry. However, a number of framing options were considered during the design phase, before steelwork was finally chosen.

“A braced steel frame with clear span cellular beams with a 150mm thick composite metal deck slab was recommended as the solution most compatible with the client’s aspirations. This provides an economic quality building with a minimum of 15m clear spans between columns,” explains WSP Associate Neil Wilkinson.

Concrete framing options were discounted as more expensive and time consuming, while the steel option offered the advantage of a lighter structure which consequently meant a more economical substructure. Using 15m long Westok cellular beams, designed with 425mm holes at 650mm centres, offers the desired open plan flexibility for each of the floors, while accommodating the services within the structural void. Incorporating metal decking means the floor to ceiling heights have been kept down, reducing the structure’s overall height, compared to other framing options, which again has kept costs down.

Structurally each of the three blocks are based around a regular 15m x 7.5m grid pattern. As steelwork begins at basement level, this uniform grid is also replicated in the partially subterranean car park. Stability for the building is derived from a combination of bracing in the core areas and moment connections along the two outermost elevations. 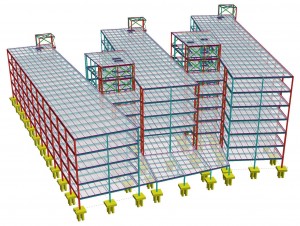 Steel cross bracing has been inserted into each of the three stair cores located at the end of each of the blocks, while in the atrium, the building’s two main lift cores are also braced for vertical stability.

“The atrium lift cores along with the stair cores don’t stabilise the entire structure, we still needed more,” adds Mr Wilkinson. “The main north and south elevations of the two outer blocks have moment connections in every bay. This was the only solution as we couldn’t add bracing here because of windows.”

Due to the site’s industrial past a large scale remediation programme was carried out prior to the construction of the civic centre. When GMI started on site it firstly had to plateau the site and approximately 15,000m³ of overburden was removed. Once the required approximate 18m deep CFA piles were installed, a culvert which ran right across the site had to be diverted, and then the structure’s footprint was completely ringed by a continuous series of 12m deep steel sheet piles.

The close proximity of the River Don means the site is within a flood zone as defined by the Environment Agency. Installing sheet piles, founded on mudstone, effectively seals the site off from any possible water seepage in the event of any flooding.

Once these preliminary works had been completed, GMI began casting the ground beams and retaining walls, and once this was done steelwork erection was able to begin.

“Working in a north to south direction we had a rolling scheme, with the steelwork erectors following on behind the initial concreting team,” explains GMI Senior Project Manager Gary Oates.

The completed stone plateau slab gave Billington’s erection team a laydown area for its steelwork deliveries as well as the precast stair units which it also installed. The rolling construction sequence was then continued with the metal decking and the concrete floors installed after each of the three blocks was erected.

Steelwork has now been completed on the project with the cladding now well under way on all parts of the structure. Each of the façades is to be covered with red sandstone panels, a colour chosen to complement many of the town’s older buildings. Rainscreen is being applied to the structure’s cores, while modular glazing panels have been installed for all of the windows.

The main shell of Rotherham’s new civic centre is scheduled for completion in September, with final fit-out being concluded by early 2012. 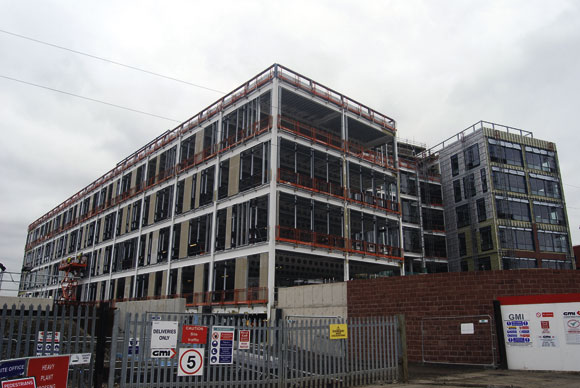