Off-site solution made to measure 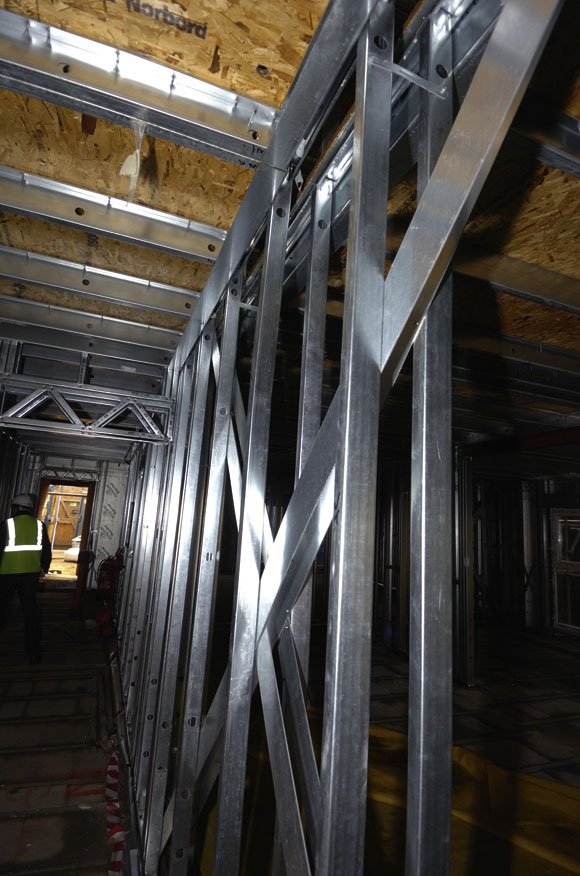 The advantages of offsite construction have come to the fore in south London where a residential project is making use of a bespoke prefabricated light steel solution for a new four storey development.

Consisting of 39 residential units, spread over four floors, 166 Sumner Road, Peckham is one of the London Borough of Southwark’s latest housing developments.

On this project main contractor Greenacre Homes has chosen to utilise a prefabricated lightweight steel framing solution, a method which provides a number of advantages including less work and time spent on site, a safer working environment and minimal working at height.

The factory assembled system of wall frames and ceiling cassettes was not the original framing choice for this project. Initially the job consisted of a timber frame structure, but after a serious fire in 2009, which destroyed the partially completed building, a design rethink was undertaken. 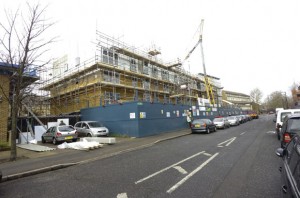 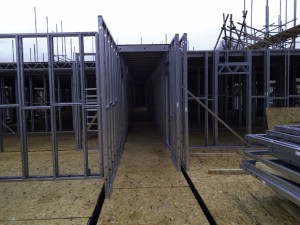 Each floor is easily bolted onto the one below

“We chose to go with a light steel solution this time as there are a number of sustainable benefits associated with offsite construction,” says Greenacre Project Manager Simon Holmes. “One of the important benefits of the system is that it provides a tidy and safe site during construction, which means a significant reduction in health and safety hazards, while its ease and speed of construction is also important.”

The prefabricated steel solution used on Sumner Road was manufactured and supplied by Engineered Off-site Solutions (EOS). The system primarily consists of pre-assembled wall frames and ceiling cassettes, all of which come to site fully fitted and ready for immediate erection and installation.

To produce this light steel framing system EOS initially produces a 3D model using Tekla software. Information from the model is then fed to the assembly plant’s cold form framing machines, which then produce a project’s bespoke units.

“Our method means we have zero steel wastage in production,” explains EOS Senior Structural Engineer Christopher Shipman. “It’s very sustainable, as even the steel from punched holes is collected and then recycled.”

For this residential project EOS has manufactured and supplied external and internal walls frames typically measuring 2.4m x 3m. The external frames are supplied fully insulated and are even fitted with brackets for balconies to tie into, as well as channels to accommodate brickwork cladding.

Frames can also be delivered to site with windows and doors already in place, again saving the contractor valuable time and effort. However, on this project the frames were supplied with just the openings for windows and doors, allowing these fittings to be added later in the sequence.

Internal wall frames typically have the same dimensions as the external units, although these party walls are not insulated and include cross bracing for overall structural stability, although the system is predominantly self-stabilising.

At Sumner Road construction of the apartments restarted in September 2010, and once the concrete ground beams were in place, the site was ready for the delivery of its first prefabricated panels. For this job the bespoke wall panels consist of a 65mm thick light steel frame, a size chosen to replicate the original timber frame.

Delivery to site was made in a just-in-time procedure with panels lifted straight off the truck by tower crane and into position on the project. Specialist subcontractor Excel Structures erected the steel system using a ‘balloon’ method, whereby the wall panels for one complete floor are all bolted down into position first. This then allows the ceiling cassettes to be easily dropped into place, as they hang onto the inside of the wall panels via a pre-fitted Z-hangar. 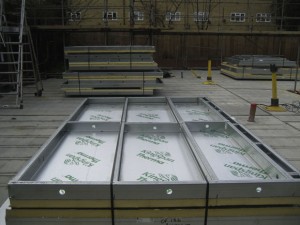 Wall frames arrive on site insulated and ready to be erected 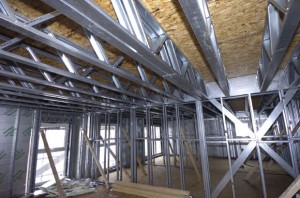 “Using the Z-hangars means the system achieves a direct wall-to-wall connection and good air tightness,” explains Mr Shipman. “Each floor is easily and quickly erected as there is only one joint per floor.”

Once the walls and floor cassettes have been lined and levelled, the next storey of wall frames can be added, with the erection crew working safely from the floor of the cassettes they have just erected. The process was then repeated until the fourth and topmost level was completed.

The floor cassettes typically measure 4m x 2.4m and were all prefabricated to include a high grade chipboard flooring. The underside of the cassettes features a steel lattice section to provide rigidity. Cassettes forming the ceilings in the project’s communal corridors are slightly different as they do not have lattices, but instead have C-sections which came to site pre-punched with service holes.

To allow other follow-on trades to begin working on the project efficiently and quickly, each of the external wall frames also have factory fitted scaffold supports. This allows the scaffolding to be quickly erected once one storey of prefabricated units have been completed, and also allows the cladding programme to get a speedy start.

“For this four-storey project the offsite steel system was the best solution,” comments Excel Structures Managing Director Jason Pritchard. “It offers versatility and long internal spans, while importantly there is no shrinkage after the structure is completed, unlike a timber frame.”

Allowing the system to have large internal spans, which on this project are located in openings within some of the larger apartments, hot rolled 250mm thick load bearing beams have been erected and integrated into the system.

The final elements to be erected on this project were the cassettes forming the roof structure. This structure was formed with an identical erection method as the building’s other ceilings, the only variant being that the roof slopes in four directions.

The slopes, which may have been problematical for some other construction methods, were formed with tapered lattices – varying from 250mm deep to 450mm deep – within the cassettes.

“Whatever structural shape is required it can be incorporated into the 3D model during the design stage,” sums up Mr Shipman.“In this way, what seemed like a complex shape was easily fabricated in our factory ready for onsite erection.”