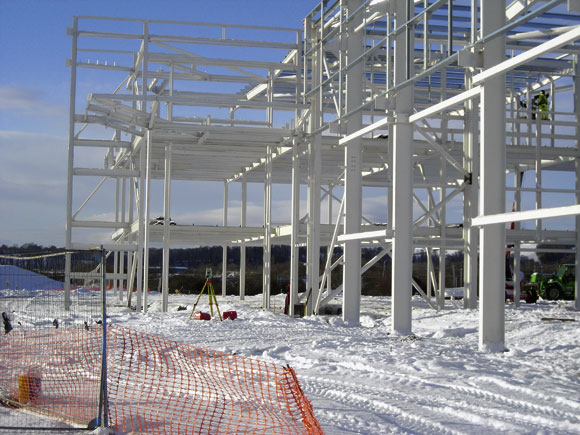 The steel programme is on schedule despite some inclement weather conditions

One of Scotland’s largest regeneration projects is under way on the site of a former distillery in Dunbartonshire. NSC reports on one of the initial structures of the scheme.

Client: Aggreko
Architect: Bradford Robertson
Main contractor: Morgan Sindall
Structural engineer: Struer
Steelwork contractor: Atlas Ward Structures
Steel tonnage:1,100t
Steel construction as well as modular offsite techniques are helping to fast track the delivery of a £20M manufacturing facility for Aggreko, the supplier of temporary power and temperature control solutions.Located on a 16-acre site within the Lomondgate development near Dumbarton, the facility will replace Aggreko’s existing plants, which are currently spread around the West of Scotland, creating up to 200 jobs.

With an overall footprint of 14,800m² the new single storey facility will house the design, manufacturing and assembly of Aggreko’s power and temperature units. To minimise the carbon footprint of the plant, the energy produced during generator tests will be fed back into the National Grid.

Although part of the Lomondgate scheme, the Aggreko plot was a greenfield site adjacent to the former distillery. When main contractor Morgan Sindall started its works in September, a large scale cut and fill operation was undertaken to level the ground. This was followed by soil stabilisation and the installation of some 4,400 piles to depths ranging from 4m to 15m.

“The ground was very soft and required a lot of preliminary work,” explains Allan Currie, Morgan Sindall Project Manager. “Concrete strip foundations have been installed onto the piles and the steelwork is then erected and bolted down to these.” 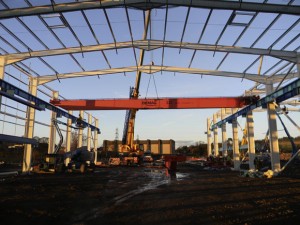 High level crane beams can be added throughout the structure

Structurally the plant is a large steel portal frame, consisting of 23 × 7.2m bays and three 31m spans across the width. To form this large internal area trusses for the roof were brought to site in 15.5m lengths. These were then assembled on site into 31m-long sections (one span) before being lifted into place by mobile crane.

The crane beams span between and are fixed to rows of internal portal columns. The beams will support two 32t capacity cranes in each bay.

In the event of Aggreko deciding to reconfigure the internal layout of the building and increase the area in which the overhead cranes operate, all columns have been designed to support these extra beams. As the steelwork has been future proofed, no modification of the frame would be necessary if more crane beams are added. 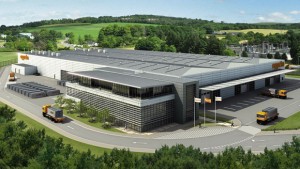 A visualisation of the completed Aggreko facility

“Many of the portal columns are heavier than they currently need to be, but the entire portal frame has been designed for possible future expansion of the crane beams,” explains Kenny Stevenson, Struer Project Engineer.

Also attached to the 12m-high roof trusses are a series of M&E piping systems. These are being prefabricated offsite, not only to speed up the construction process, but also to minimise work at height.

Sitting alongside the main frame structure there is a single storey administration block. Measuring 25m wide, the attached steel framed structure covers an area of approximately six grids (43.2m) and adjoins the main building via a glazed atrium.

Structural engineer Struer had to carefully design the connection between the main building’s frame and the glass roof, as this joint also dampens any vibrations from crane movements, effectively sealing off the office block.

This winter’s severe weather has affected the construction programme and Atlas Ward’s steel erection was halted for four weeks either side of Christmas.

“It was too cold to pour concrete and so the strip foundations couldn’t be installed,” explains Mr Currie. “This obviously meant the steel erection had to stop.”

Atlas Ward has been back on site since mid-January and steel erection is due to be completed this month (March). Following on behind the steelwork erectors, the cladding process has now begun. The main plant building and office will feature a combination of both composite panels and curtain walling.

The Aggreko plant is scheduled for completion in June.