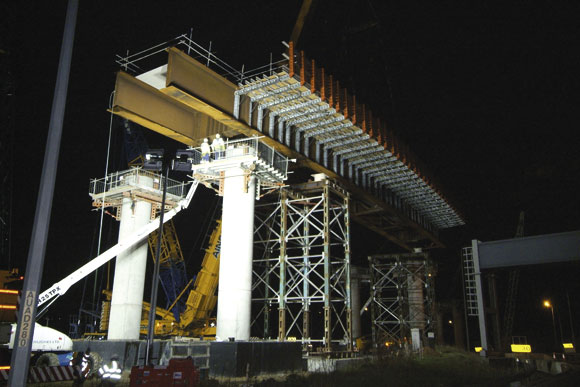 More than 4,000t of weathering steel will be used for the construction of four new bridges on the busy A2/A282 junction in north Kent, representing one of the largest ever single uses of this environmentally-friendly material in the UK. Martin Cooper reports.

Nearly 200,000 vehicles use the A2/A282 intersection in Kent every day, creating the knock-on effect of considerable congestion, particularly during peak hours. In order to alleviate severe traffic flow problems at one of the UK’s busiest junctions the Highways Agency (HA) has implemented a number of measures.

The road works at the A2/A282 junction began in September last year and are set for completion by Spring 2008. The project includes a major road widening scheme along the A2. However, one of the main drivers of the project is to divert traffic away from the roundabout that sits below Junction 2. This will be achieved by constructing new free flow links, one carrying traffic from the A2 westbound onto the A282 northbound, another from the A282 southbound to the A2 eastbound and a third dedicated lane for A2 westbound to A282 southbound movement.

The new link roads will require four new bridges to be built to carry traffic over existing highways and all of these structures are being built with weathering steel.

“Repainting these bridges at a later date for maintenance would have been logistically difficult, bearing in mind one of the structures crosses one of the UK’s busiest roads,” explains Gordon Taylor, Project Manager for steelwork contractor Fairfield-Mabey. “Once these structures are erected there is no need for any painting.”

In contrast to other steels, which always look their best immediately after being erected, weathering steel is said to improve after a couple of years exposure to the elements. Architects increasingly specify it for use on buildings, fully exposed.

“The colour of weathering steel can change from orange brown to a dark brown or even purple,” explains Mr Taylor. “Which looks aesthetically pleasing and surprises many people who think the steel will just look rusty.”

There is also an environmental and cost advantage connected with using weathering steel. “No painting in the future will obviously save money, but there won’t be any paint spillages, which is good for the environment,” says Robert Phillips, Costain Project Manager.

The longest bridge to be built is the A2 westbound to A282 northbound flyover, known as S01, which is a 420m-long nine span viaduct. Fairfield-Mabey will erect more than 1,800t of weathering steel for this bridge in two separate lifting programmes.

The company started work on site at the beginning of January, but only started erecting steelwork in February.

“We gave ourselves four weeks to assemble some sections on site, so that when we brought the required 1,000t mobile crane on to site we’d have enough sections ready to erect several spans in one visit of the crane,” Mr Taylor explains. 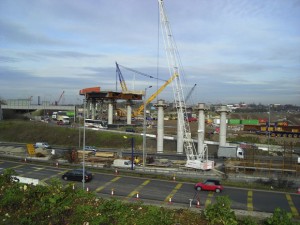 Unusually, the middle section of the bridge is being erected first, with Fairfield then working southwards, completing six of the nine spans in one sequence. This section of work will see the bridge erected over the A2, but not over the A282.

“The concrete piers at the northern end of the bridge haven’t been built yet,” explains Mr Taylor. “That section is going to be quite challenging as Costain is forming piers either side of one of the UK’s busiest highways.” The last two piers are currently under way, and once complete Fairfield will erect the last sections of the viaduct in May.

The bridge’s nine spans carry the structure over eight piers and two abutments. Five of the concrete formed piers have four columns, while the three middle piers only have two.

“It’s all down to aesthetics and cost,” says Mr Taylor. “The fewer columns in a pier the easier it is on the eye, while money is saved as less concrete needs to be poured,” he adds.

Another important factor in the column disparity among the piers is the location of the bridge. The middle three spans traverse open ground and consequently there is enough room for temporary support trestles to be erected during the lifting process.

“The piers allowing the bridge to cross the two major thoroughfares are placed in the middle of the roads and there just isn’t room for temporary works,” says Mr Taylor.

The extra two columns per pier consequently act as permanent support for the bridge as well as temporary support during the erection programme.

“As the majority of the piers are situated in the middle of existing roads we’ve had to ensure there’s minimal disruption to traffic,” says Mr Phillips. “This will also apply to the steel erection process and this is being achieved with a number of temporary roads,” he adds.

All nine spans of the bridge vary in length, from the longest at 59m to the shortest at 38m. The build up of the structure is multi-span and it also curves along its entire length by approximately 45-degrees from west to north.

Steelwork for the bridge deck consists of two braced pairs of girders for each span, and these are paired up on site and lifted into position by the 1,000t Liebherr crane. Cross members are situated at 8m intervals. Each pair of girders consists of four steel sections which are bolted together on site and readied for erection.

During assembly, Costain has also taken the opportunity to install its GRP formwork onto the girders so it is in place for concrete pouring to begin.

“This just cuts down on crane usage,” explains Mr Phillips. “Otherwise we’d only have to come along again later and lift the formwork into place.” Typically this adds another 30t to each lift, with braced girders typically weighing 100t.

Costain in conjunction with Fairfield-Mabey has worked out seven optimum positions for one crane to lift all of the bridge decks into place. During the steel erection process the concrete deck will then be poured, following on, three spans behind the steelwork.

Meanwhile, to the east of the main bridge, two other steel structures are under construction. Each requiring 1,000t of weathering steel, these two parallel five span bridges are both 250m-long and are situated either side of the A2.

One structure will carry traffic from the A2 over the Darenth Valley and then onto the S01 bridge, while the other structure feeds traffic onto the A2 from the A282 southbound.

The steelwork construction for these bridges is slightly different as they are ladder beam decks and they are being built without requiring road possessions. Spans vary between 33m and 50m on these bridges.

Similar to the larger bridge, Fairfield has another assembly yard adjacent to these bridges and the company will erect them both during one 12-week programme. Assembly and erection consists of bringing beams to site in sections and bolting them together on the ground before being lifted into position.

Once a pair of ladder beams have been positioned onto the pier, 10.3m long cross members are then bolted into place at 3.5m intervals.

The cross beams are generally 900mm deep members, except those at the piers which at 2.35m deep are almost as deep as the 2.6m deep main girders. “These beams are taking the wind loading through the rigidity of the piers, while the other members are just supporting the concrete bridge deck,” explains Mr Taylor.

During May, Fairfield will also erect the fourth and final new steel structure. Known as S04, this bridge will require 230t of weathering steel and is the smallest of the structures. It carries southbound A282 traffic over a small slip road before linking up with the A2.

“With no painting work to be done the erection of this small structure will bring to an end one of the largest weathering steel projects we’ve ever done,” sums up Mr Taylor.

The majority of steelwork is lifted by one 1,000t capacity crane